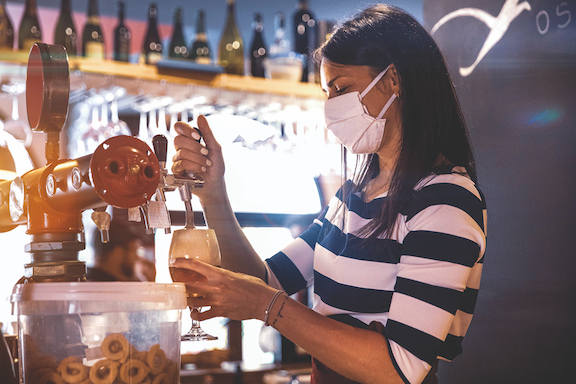 Republican Assemblyman Angelo Morinello joined members of the Senate and Assembly minority conferences on Monday for a press conference calling for the repeal of two of Gov. Cuomo’s executive orders – 202.52 and 202.74 – which require customers to purchase food with any order of an alcoholic beverage, while also forcing restaurants and bars to close at 11p.m.

“The pandemic is not over and we know this,” Morinello said. “However, as the availability of the vaccine increases, and our research and understanding of the virus improves, we should be doing everything to reopen industries and help revitalize the ones that are struggling. We have been told that science will guide the reopening of businesses in this state, but this apparently does not apply to restaurants and bars. Forcing customers to order food with a beverage order and restaurants to close their doors by 11 is not science-based policy and is exacerbating the already bleak situation for restaurant and bar owners.”

Last week, the conferences announced the concurrent resolutions of the Assembly and Senate terminating the provisions of the executive orders issued by the governor pursuant to Section 29-A of the executive law. The governor has announced that, as of April 5, the 11 p.m. curfew will be lifted for pool halls, casinos, gyms and bowling alleys. However, no such announcement was made for the state’s restaurants and bars.

Senate Republican Leader Robert Ortt said, “Despite claims by the Democratic majorities that they revoked the governor’s emergency powers, there are still egregious mandates in place that have absolutely no scientific basis. These arbitrary rules remain in effect at the whim of one man – our embattled governor – and they continue to harm our small businesses. I’m hopeful the majority will bring our commonsense proposal to the floor and join us in providing some relief to our bars and restaurants who have been devastated by the pandemic.”

Assembly Republican Leader Will Barclay said, “It’s obvious that we are no longer operating under a system where science is driving decisions. There is no data that explains lifting curfews on certain facilities and leaving bars and restaurants off that list. Overturning Gov. Cuomo’s senseless, arbitrary directives is as easy as passing a resolution. It’s time for Democrats to take that step.”

Sen. George Borrello said, “Gov. Cuomo’s ‘revoked’ emergency powers remain extraordinarily real and profoundly harmful to our bars, restaurants and hospitality businesses, which continue to struggle under his senseless mandates. Without a doubt, the 11 p.m. curfew is one of the most glaring examples of an unjustifiable, unscientific edict. Yet, despite having no impact on the virus, the curfew has had a terrible impact on the bottom lines of countless small businesses in the hospitality industry and their hardworking employees by reducing the number of patrons they can serve each evening, compounding the effect of capacity limits. These curfews are disappearing in neighboring states and New York needs to follow suit immediately.”

Assemblyman Jarett Gandolfo said, “The 11 p.m. restaurant curfew and food requirements have no basis in logic or data. Are we really supposed to believe that casinos and pool halls are safe from COVID after 11 p.m., but not restaurants? Or that having a cheeseburger on the table keeps us safe from the virus? If the governor refuses to lift these nonsensical rules, the Legislature can and should repeal them immediately.”

Assemblyman Mike Norris said, As the sponsor of the New York Business Emergency Relief Act, I know how urgently small businesses across our state need help – every dollar counts now more than ever before. With our economy reopening and more people being vaccinated, along with studies proving that the COVID-19 spread was largely something that happened outside of restaurants to begin with, I cannot understand why our hardworking restaurant industry is still being unfairly punished with arbitrary curfews that are stifling business and further endangering their ability to survive. These curfews must be lifted immediately.”

Norris serves as the chairman of the Assembly minority conference.

Legislative Republicans have been leading the charge to repeal the governor’s emergency powers since last May. Ortt’s camp said, “On March 5, the Majorities put forward a Democrat-negotiated bill with the governor’s office that was supposedly intended to remove the governor’s emergency powers. However, that bill did not go far enough and was not an actual repeal, as has been made clear since its passage, and arbitrary rules – including the curfew on restaurants and bars – remain in effect, further harming our small businesses.

Earlier this month, the New York State Senate Republican conference announced the introduction of another concurrent resolution (B477) that would rescind Cuomo’s mandate that prohibits bars and restaurants from serving alcoholic beverages to patrons who do not order food. The majority has so far not allowed the resolution to the floor for a vote.