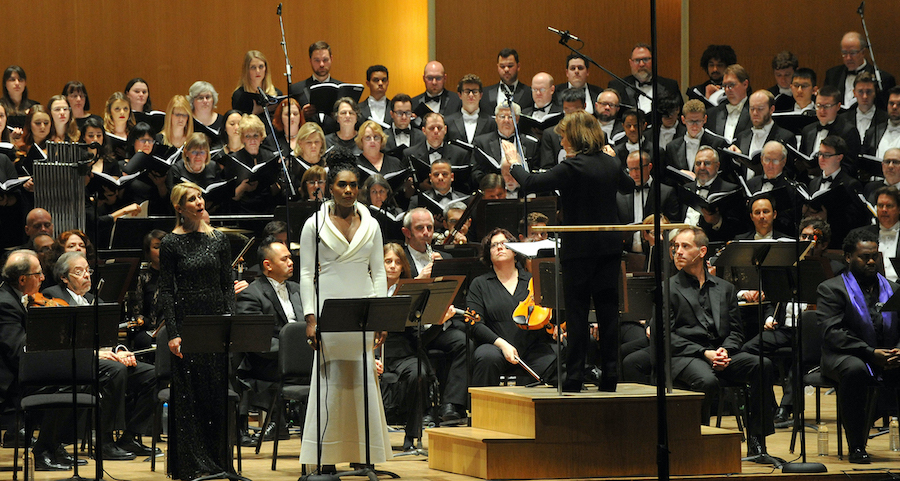 “The Passion of Yeshua” is a dramatic oratorio written by contemporary composer Richard Danielpour, a schoolmate and longtime friend of Falletta's. It is the personal telling of the final hours of Christ on Earth. The piece incorporates Christ's Jewish faith in Hebrew passages, and also includes the seldom-heard voices of Mary Magdalene and Mary the Mother of God for the first time in a work of this form. The recording features Hila Plitmann, soprano; J’Nai Bridges, mezzo-soprano; Timothy Fallon, tenor; and baritones Matthew Worth, Kenneth Overton and James K. Bass.

“The musicians, singers, Richard and I are truly humbled and honored by these awards," Falletta said. “ ‘The Passion of Yeshua’ was an incredible project that brought together hundreds of musicians and voices in a simply unforgettable performance. We thank the Recording Academy for this prestigious honor, and all the other remarkable nominees for their outstanding work."

The BPO, under the direction of Falletta, last won a Grammy Award in 2008 for “Best Contemporary Composition” for its recording of John Corigliano’s “Mr. Tambourine Man: Seven Poems of Bob Dylan.” Falletta most recently took home a Grammy in 2019 for "Best Classical Compendium" for the recording of “Fuchs: Piano Concerto 'Spiritualist'; Poems Of Life; Glacier; Rush,” which she recorded with the London Symphony.

The BPO and BPC's recording of Danielpour's “The Passion of Yeshua” is available for purchase at bpo.org or by calling the Box Office at 716-885-5000.

The Buffalo Philharmonic Orchestra Society Inc. provides a resident, professional, major symphony orchestra of artistic excellence and integrity to enrich the quality of life in Western New York through the presentation of live symphonic music and other musical events that educate and entertain the broadest possible audiences within and beyond the Western New York region. Since its founding in 1935, the BPO has served as Buffalo’s cultural ambassador. Falletta is music director of the Grammy Award-winning orchestra, which traditionally presents more than 120 classics, pops, rock, kids and youth concerts each year for over 200,000 people. For more information, visit bpo.org.

The Buffalo Philharmonic Chorus is a nonprofit organization dedicated to enriching the Western New York region through the performance of high-quality, diverse musical programs and developing singers in the choral arts. With a roster of over 140 singers, the BPC is frequently heard as the principal guest chorus of the Buffalo Philharmonic Orchestra. For more information, visit bpchorus.org. The New York State Council on the Arts sent words of praise.

"NYSCA extends our deepest congratulations to Albany Symphony, Buffalo Philharmonic Orchestra and The Met Opera on their Grammy Awards," Executive Director Mara Manus, said. "New York state musicians have continued to share their talents and uplift New Yorkers during this incredibly challenging year. Whether experienced as a recording, virtual concert, or live performance, music continues to be an invaluable asset to New York's creative culture."

A national leader for its innovative programming, the Albany Symphony received the 2020 Grammy for Best Classical Instrumental Solo for “Theofanidis: Concerto For Viola And Chamber Orchestra,” a world premiere recording of a work inspired by Navajo poetry. The Grammy was given to Richard O'Neill and David Alan Miller, conductor.

The Metropolitan Opera received the Grammy award for Best Opera Recording for “Gershwin: Porgy And Bess,” a historic opening night production performed on the Met stage for the first time in 30 years, seen around the world through the “Live in HD” series. The honor was given to David Robertson, conductor; Frederick Ballentine, Angel Blue, Denyce Graves, Latonia Moore and Eric Owens; David Frost, producer, The Metropolitan Opera Orchestra, and The Metropolitan Opera Chorus.

In recent years, the Met has developed new initiatives to highlight contemporary composers and will open its next season with a premiere by Terrance Blanchard, the first work by a Black composer in its history. The Met has also expanded offerings through its extensive streaming collection, “Met Opera on Demand.”