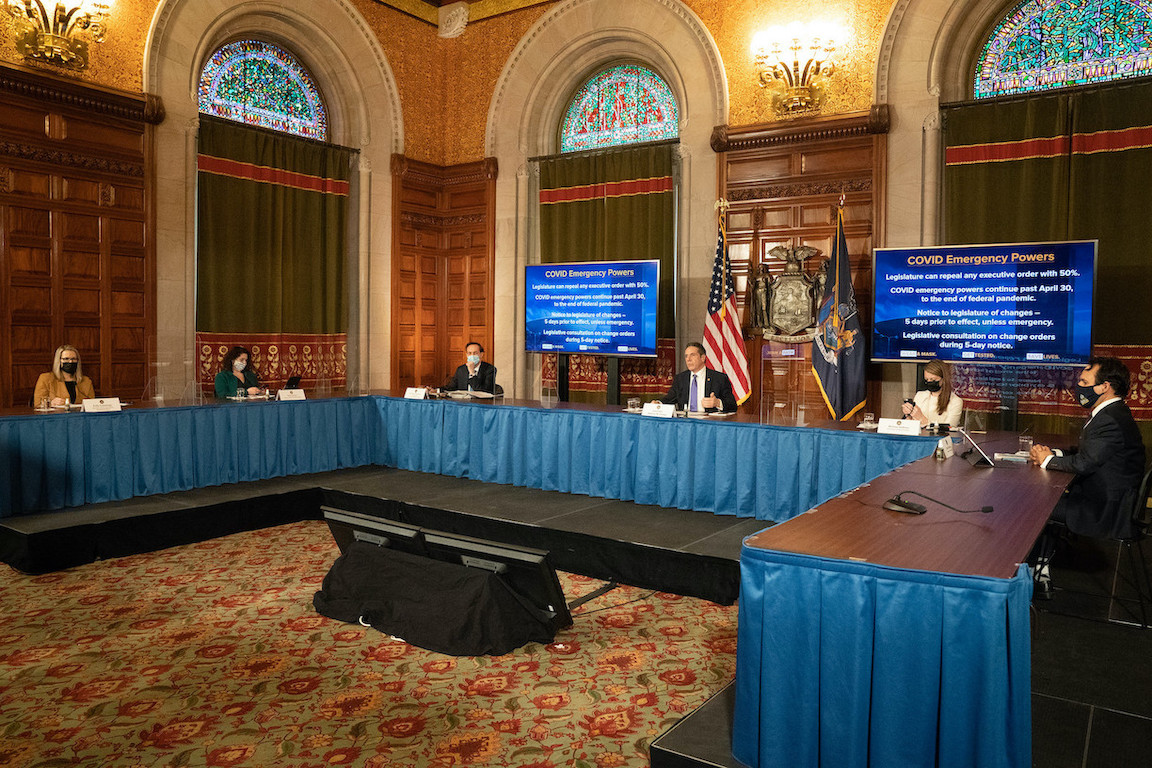 Gov. Andrew Cuomo spoke Wednesday about his executive powers during a coronavirus update from the Red Room at the State Capitol. (Photo by Don Pollsrd/Office of Gov. Andrew M. Cuomo)

On Wednesday, New York State Senate Republican Leader Rob Ortt and Assembly Republican Leader Will Barclay blasted the proposal advanced by the majorities in the State Legislature to, as they said, “supposedly revoke” Gov. Cuomo’s emergency powers. The leaders, joined by members of their respective conferences, repeated their calls for “a straight repeal of the governor’s emergency powers instead of this bogus backroom deal.”

Ortt said, “Senate Republicans advanced the first proposal to end Gov. Cuomo’s emergency powers 280 days ago today. The sham that the Democrats are putting forward after getting the governor’s stamp of approval is a complete insult to New Yorkers. The bill does nothing except expand the authority of the governor, who has covered up 15,000 nursing home deaths and is currently involved in sexual harassment scandals, both of which are under investigation by the FBI and state attorney general.”

Barclay said, "Now that we've seen the details of what Democrats proposed, we can more fully appreciate it for the failure it is. Make no mistake: This is not what 'repeal' looks like. This is not what ending emergency powers looks like. But it is what a three-way agreement looks like. A year ago today, the governor signed the bill that expanded his authorities. In the past 12 months, we've seen lockdowns, business closures, jobs lost, schools in chaos, a nursing home coverup, and now criminal investigations and sexual harassment allegations. Somehow, Democrats still can't seem to bring themselves to govern independently of Andrew Cuomo.”

Instead of immediately revoking the governor’s emergency powers, as Republican members of the Senate and Assembly have repeatedly called for, the GOP said this bill “has been given the governor’s stamp of approval” and would:

“Allow the governor to extend or modify the nearly 100 executive orders he has instituted since the start of the pandemic, as long as certain Democrats are allowed to review and comment. This proposal allows him to do so with little more than a courtesy call to the Legislature because those comments will be accepted even after an order takes effect.”

Republicans in the Senate and Assembly have advanced legislation multiple times “to fully repeal the governor’s authority, return New York to a representative Democracy and restore the Legislature as a co-equal branch of government. The bill that’s been proposed is barely a fraction of what’s necessary.”

Ortt said, “Democrats in both houses should be ashamed of themselves. New Yorkers know what needs to be done. And that is why I stand before you today along with Leader Barclay to tell you that we will continue to fight tooth and nail to bring justice to the millions of families who lost loved ones in nursing homes, to fight for those who have been mistreated by the governor, and to restore New Yorkers’ trust back in their government.”

Barcaly said, “Republicans in the Senate and Assembly have repeatedly called for a return to representative democracy, where the livelihoods and daily routines of 19.5 million New Yorkers are not left to the whim of one man. That's not how our government was ever intended to operate. The legislation presented by Democrats preserves far too much authority of an embattled governor and comes nowhere near what this state needs or deserves.”

The governor must justify to the Legislature the extension or modification of any existing directives every 30 days.

The Legislature can, by a simple majority vote, repeal any executive order at any time.

The bill allows the Legislature to undo the state of emergency.

We did not negotiate this bill with the governor.