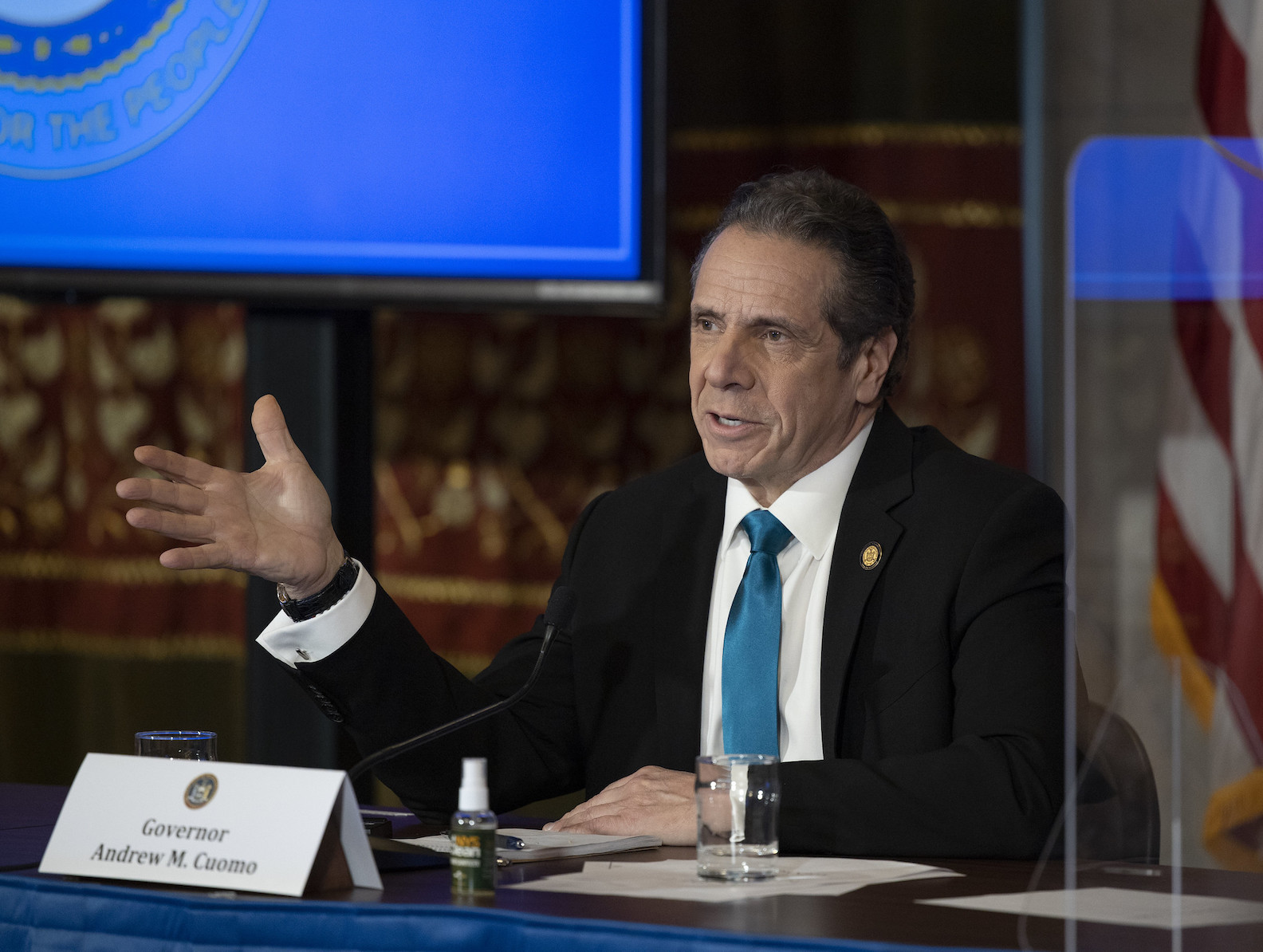 Gov. Andrew Cuomo provides a coronavirus update from the Red Room at the State Capitol on Feb. 19. (Photo by Mike Groll/Office of Gov. Andrew M. Cuomo)

“For months, our conference has been calling for an independent, top to bottom investigation of Gov. Cuomo and his administration because of their disturbing disinformation efforts regarding COVID-19 in our nursing homes. This past week, when additional disturbing information came to light regarding allegations of sexual harassment made against the governor, members of our conference called on Attorney General Letitia James to appoint a special prosecutor to investigate. With more women coming forward to share their experience, we are reiterating that call and demanding an independent, thorough investigation that must commence immediately.

“This is the story of a failing administration. Week by week, Gov. Cuomo’s credibility has fallen apart as additional chapters of this saga unfold. We learned recently about the criminal investigation into this administration being conducted by the Department of Justice related to a cover-up of nursing home deaths. This news was followed by damning revelations from current and former members of the Legislature revealing a pattern of bullying, arm twisting and threats by the governor and his team. Now, this administration faces calls for independent investigations into multiple harassment allegations by former members of the governor’s staff.

“The past week’s disturbing details on sexual harassment allegedly committed by the governor against two brave women further expose the toxic leadership of Gov. Andrew Cuomo.

“This is an exceedingly difficult time in state government. Leaders in Albany must not only lead our state through a historic global pandemic, but negotiate a state budget in the midst of a fiscal and economic crisis. These tasks require leaders who have the trust of the public and level of focus to tackle the difficult tasks ahead. At this time, Gov. Cuomo provides neither.

“I have been vocal in calling for an end to the governor’s emergency powers, something I still strongly support. But in light of the news of the past few weeks, it has become increasingly clear that does not go far enough.

“The governor has repeatedly broken the public’s trust, he has demonstrated toxic leadership qualities, and he is irreparably compromised in his dealings with his co-equal partners in the Legislature. For these reasons, I believe Gov. Cuomo must resign.”

Cuomo has denied allegations accusing him of sexual harassment.

"The governor's office wants a review of the sexual harassment claims made against the governor to be done in a manner beyond reproach. We had selected former federal Judge Barbara Jones, with a stellar record for qualifications and integrity, but we want to avoid even the perception of a lack of independence or inference of politics.

"Accordingly we have asked the attorney general of New York state and the chief judge of the Court of Appeals to jointly select an independent and qualified lawyer in private practice without political affiliation to conduct a thorough review of the matter and issue a public report. The work product will be solely controlled by that independent lawyer personally selected by the attorney general and chief judge.

“All members of the governor's office will cooperate fully. We will have no further comment until the report is issued."

"Questions have been raised about some of my past interactions with people in the office.

"I never intended to offend anyone or cause any harm. I spend most of my life at work and colleagues are often also personal friends.

"At work sometimes I think I am being playful and make jokes that I think are funny. I do, on occasion, tease people in what I think is a good natured way. I do it in public and in private. You have seen me do it at briefings hundreds of times. I have teased people about their personal lives, their relationships, about getting married or not getting married. I mean no offense and only attempt to add some levity and banter to what is a very serious business.

"I now understand that my interactions may have been insensitive or too personal and that some of my comments, given my position, made others feel in ways I never intended. I acknowledge some of the things I have said have been misinterpreted as an unwanted flirtation. To the extent anyone felt that way, I am truly sorry about that.

"That's why I have asked for an outside, independent review that looks at these allegations.

"Separately, my office has heard anecdotally that some people have reached out to Ms. Bennett to express displeasure about her coming forward. My message to anyone doing that is you have misjudged what matters to me and my administration and you should stop now – period."

New York Attorney General Letitia James released the following statement Sunday, in response to Cuomo announcing he would grant her request for a referral to investigate allegations of sexual harassment:

“We expect to receive a 63(8) referral with subpoena power to investigate allegations of sexual harassment against the governor, in line with our demands and New York state law. The referral would be made solely to the attorney general's office. This is not a responsibility we take lightly. We will hire a law firm, deputize them as attorneys of our office, and oversee a rigorous and independent investigation.”

James initially released a statement calling for a referral from Cuomo to investigate the allegations of sexual harassment, and later clarified nothing less than a referral under Executive Law § 63(8) would be accepted.