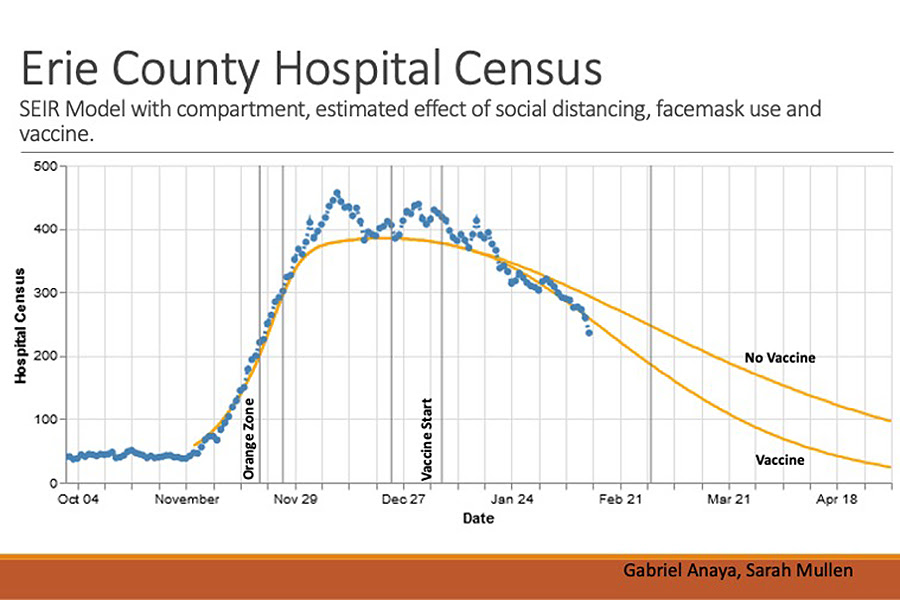 This graph shows that even the current vaccination rate will reduce the number of patients hospitalized with COVID-19 by at least 10% by March 1. (Source: Gabriel Anaya and Sarah Mullin, University at Buffalo) ​

Variants may increase cases, but not dramatically with rising vaccination rates so long as public continues to observe all public health measures

Western New York is already benefitting from COVID-19 vaccinations, according to new models developed by University at Buffalo data scientists.

Distribution problems, including weather delays, continue to prevent as robust a rollout of the vaccinations as many would prefer – but even the current slow rate of vaccinations in Western New York is cause for cautious optimism, say the UB scientists.

“I was surprised that the vaccine effect shows up so quickly in our models,” said Peter Winkelstein, M.D., executive director of UB’s Institute for Healthcare Informatics and clinical professor of pediatrics in the Jacobs School of Medicine and Biomedical Sciences at UB. He leads the UB team that has been modeling the spread of the SARS-CoV-2 virus since the start of the pandemic last March.

Like all models, the UB models rely on a number of assumptions, including that public health behaviors – such as masking, social distancing and hand hygiene – will continue at the same level, behaviors Winkelstein said are “absolutely critical” to continuing to see these benefits.

There is reason for some optimism, he said, “so long as we don’t take our foot off the gas and we continue to engage in all the safety and public health measures.”

Epidemiological models of COVID-19 transmission developed by the UB data scientists have significantly expanded the parameters that such models typically reflect. The additional parameters range from behavioral factors to the level of vaccinations and potential scenarios that could result once new variants of the SARS-CoV-2 virus arrive.

While experts have warned it could take longer than a year to vaccinate most people in Western New York, Winkelstein said there are factors to consider.

“Even though some estimates say it’ll take 15 months to vaccinate everybody, that’s not the critical number,” he said. “The question is, how many people need to be vaccinated in order to have an effect on spread in the community?”

And surprisingly, it’s already happening. While different endpoints can be used to demonstrate the effect of vaccinations, the UB models utilize the hospital census – the number of patients who are sick enough to be hospitalized with COVID-19 – as the key endpoint.

The UB models show that even 2,000 vaccinations a day, the level achieved in Western New York by mid-February, was sufficient to reduce hospitalizations.

“From the vaccine trial data, it looks like most of the vaccinations come close to 100% in preventing hospitalizations. We use 90% as the endpoint, meaning 90% of those who get vaccinated do not progress to significant illness,” Winkelstein said.

Another assumption the models use is that the vaccines are 90% effective at preventing someone who’s been vaccinated from being contagious.

“The vaccine effect seems to occur early,” he added. “You don’t have to vaccinate everybody before you see a significant effect, even with the relatively slow rollout.”

The UB models show that, even if vaccinations continue at the rate of about 2,000 shots per day in Western New York, the result will be at least 10% fewer hospitalized patients by March 1 than without vaccinations.

A still higher rate of vaccinations, which, Winkelstein said, is expected, could reduce the number of hospitalized patients by early March by almost 20%.

At the same time the vaccinations are having an effect, Winkelstein conceded the new variants, most prominently the B117 variant known as the U.K. variant, will begin to exert the opposite effect because of its increased transmissibility and the potential to cause more infections.

When will we know if a variant has arrived in Western New York?

“The first sign that a variant is affecting a community is when the positivity rate – the percentage of total COVID-19 tests that are positive – stops declining and starts going back up again,” Winkelstein said.

He noted the surges that began last fall and that caused cases locally and nationally to increase are now over and cases are on the decline.

If that decline reverses, that will be evidence of one of the variants, he said.

“Do I think the B117 – the U.K. variant – or one of the other variants is coming?” Winkelstein asked. “Absolutely. And when it comes, will it affect us? Absolutely.”

But the UB models also show a significant effect from vaccinations even once the variants arrive. To estimate that effect, the model assumed the new variant will likely affect half of COVID-19 cases locally and will be 40% more transmissible than the original virus.

Even in that scenario, vaccines that are at least 50% effective against the variant – and the data suggest they are likely more effective than that – will still reduce the impact on hospitalizations in Western New York.

The UB team has been doing presentations for the Erie County Department of Health on local transmission of the virus since last March. The team began with the classic susceptible-exposed-infected-recovered (SEIR) epidemiological models and has continually revised them based on changes in the rates of transmission and factors affecting transmission. Since last fall, the team made significant revisions to the models, dramatically expanding the parameters that the models reflect.

“We tuned the models for Western New York,” Winkelstein said. “We’ve taken the classic SEIR models and dramatically expanded them to deal with COVID-19 and our community, and added modeling of face mask use, social distancing, vaccine effects and variant effects. We think that’s unique.”

The addition of the effects of vaccines and the virus’ variants combine to make the UB models more sophisticated and significantly even more useful to the community.

In addition to Winkelstein, other members of the UB team include Matthew Bonner, Ph.D., associate professor of epidemiology and environmental health in the UB School of Public Health and Health Professions; Gabriel Anaya, M.D., a clinical informatics fellow; and Sarah G. Mullin, a doctoral student, both in the department of biomedical informatics. Anaya and Mullin work under the supervision of Peter Elkin, M.D., department chair.