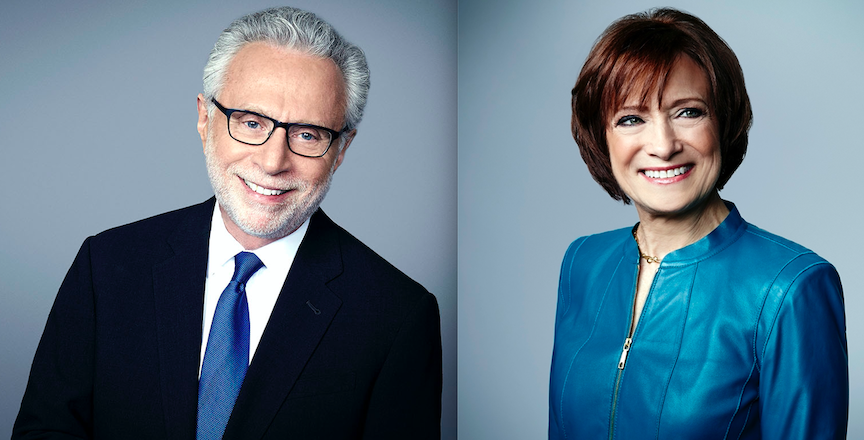 CNN journalistic legends Wolf Blitzer and Susan Candiotti are the guests in the Buffalo Broadcasters Association (BBA) online speaker series “A Conversation With ...”.

BBA President Katie Morse will host and discuss today’s media, political coverage and other topics with Blitzer and Candiotti. Viewers can submit questions for the guests.

The live fundraiser is scheduled for 7:30 p.m. Tuesday, Feb. 23. Tickets are $10 for BBA members and current students or $20 for non-members. Visit www.buffalobroadcasters.com to purchase tickets.

Blitzer is CNN's lead political anchor and anchor of “The Situation Room with Wolf Blitzer,” which airs weekdays at 5 p.m. The show provides viewers with in-depth reports about the political, international and breaking news stories of the day.

During the 2020 election cycle, Blitzer moderated several Democratic Party presidential town halls, as well as CNN's January debate in Iowa. He also anchored special coverage of “Election Night in America” surrounding the 2020 election, which lasted several days until CNN was the first to project Joe Biden as the winner. Blitzer was the one to announce it. He has also been anchoring the network’s expanded coverage of the coronavirus pandemic.

Blitzer, a Kenmore native, is an inductee into the Buffalo Broadcasting Hall of Fame.

Candiotti, a reporter at WGR-TV in Buffalo during the 1980s, may be best known for her 25-year career as national correspondent at CNN.

If there was a major national story, chances are Candiotti covered it – and won awards in doing so. She played a key role in CNN's award-winning investigative team covering the 9/11 terrorist attacks in New York City and Washington. While reporting on the Times Square bomber as it happened, she was the first reporter to find and reveal video of the plotter buying ingredients for his homemade device.

Candiotti also led the team of correspondents covering the Boston Marathon bombing and broke ongoing developments in the investigation. She was also the first CNN correspondent on the scene of the Sandy Hook shooting and the “Miracle on the Hudson.”

Some of her other notable assignments included Haiti's catastrophic earthquake; the Penn State child abuse scandal and trial; the Elian Gonzalez story; and the Oklahoma City bombing investigation, trial and execution of Timothy McVeigh.

Now retired, Candiotti is also a member of the Buffalo Broadcasting Hall of Fame.

Visit www.buffalobroadcasters.com to purchase tickets or for more information.