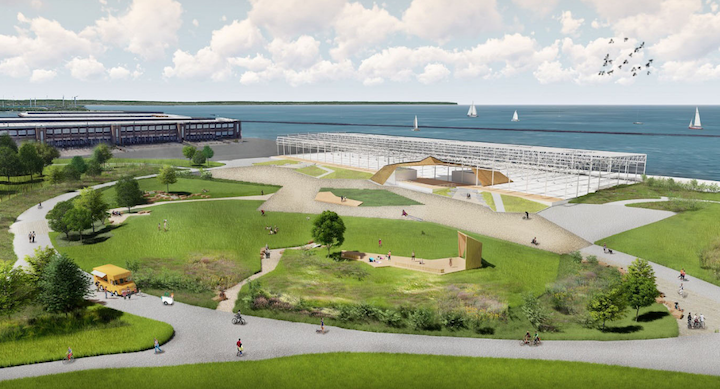 Work will be completed in phases

Erie Canal Harbor Development Corp. met and affirmed the general project plan (GPP) for the Buffalo Outer Harbor civic and land use improvement project with minor modifications. This affirmation of the GPP is the culmination of six years of planning, community engagement and coordination with the City of Buffalo and other entities and outlines future improvements to the city’s Lake Erie waterfront that will build on earlier upgrades recently completed by ECHDC.

“Today’s affirmation of the GPP is an exciting milestone for the Outer Harbor,” ECHDC Chairman Robert Gioia said. “This project will improve over 200 acres of land, providing for increased water and land access, open space, public amenities and an awareness of local history needed to reconnect the city to its waterfront.”

ECHDC provided 60 days for public comment on the GPP – an extension from the required 30 days – at the request of several organizations and individuals. The public comment period was in lieu of a public hearing on the GPP due to COVID-19-related safety precautions. In response to the comments received from the public, several minor changes and/or corrections were made to the GPP adopted in November:

√ Zoning code at 901 Fuhrmann Blvd. (terminal B): The zoning was listed as N-1C, urban core (mixed-use core). The zoning has been corrected to N-1S, urban core (secondary employment center).

√ Cultural arts: The addition of cultural arts has been added to the sitewide elements discussion, specifically under passive and active recreational amenities.

√ First Buffalo River marina: The last paragraph under this subarea description has been deleted in its entirety, clarifying that no mixed-use development will occur at this site.

The project will be done in phases, with completion over a 20-year span, or as funding becomes available. Phase 1, estimated to cost $44 million, will be funded by the Buffalo Billion, ECHDC – via the New York Power Authority (NYPA) through relicensing agreements tied to the operation of the Niagara Power Project – and federal sources. This initial phase, which will begin by the end of 2021, includes the creation of new and enhanced open spaces, increased land and water access, the addition of comfort stations, and passive and active recreational amenities. Improvements on more than 50 acres of upland and watered property, including the creation of an aquatic habitat in slip No. 3, rehabilitation of terminal B, and upgrades at Bell Slip and Wilkeson Pointe, would occur during this first phase.

The total GPP project budget is estimated to be $151 million. Later phases will be implemented when funding is secured. 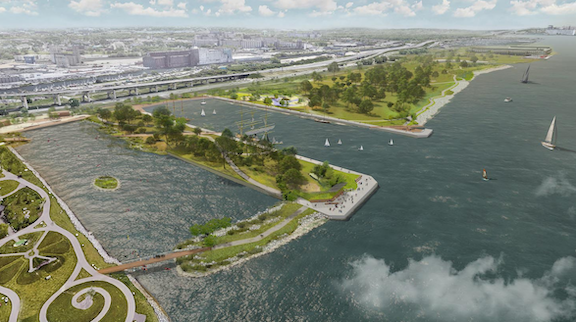 The ECHDC board also authorized ECHDC to enter into a three-year agreement with Be Our Guest Ltd., a subsidiary of Rich Products Corp., for the management of events and concessions on the Outer Harbor, from the Lakeside Complex to Wilkeson Pointe, including the bike ferry landing. The contract with Be Our Guest, which has managed the Outer Harbor for the past five years, is a revenue-generating agreement that represents no cost to ECHDC.

√ Authorized ECHDC to enter into a consultant amendment for architectural engineering services on the North Aud Block with TY Lin International. The amendment allows for amending the contract to add additional tasks, including design development and construction documents, at an amount not to exceed $612,234.

√ Approved the design of two parking lots owned by Department of Transportation at Canalside. The rehabilitation of the parking lots is designed to significantly enhance visitors’ first impressions of Canalside and downtown Buffalo.

A press release stated, “Under Gov. Andrew Cuomo’s leadership, New York is making a historic commitment to improving and expanding access to outdoor recreation. In 2013, almost 400 acres of land on the Outer Harbor was transferred from the Niagara Frontier Transportation Authority to ECHDC. As part of that transfer, Buffalo Harbor State Park was designated as the 180th state park in New York’s system and the first in the City of Buffalo. The remaining approximately 247 acres of land north of Buffalo Harbor State Park is now operated by the ECHDC, which completed several capital improvements to increase public access to and use of this property, and conducted several community-driven planning studies that have informed the current and future disposition of the project site.”

The Erie Canal Harbor Development Corp. (ECHDC) is governed by a nine-member board consisting of seven voting directors and two non-voting, ex-officio directors. The seven voting directors are recommended by the New York state governor and are appointed by the New York State Urban Development Corp. (d/b/a Empire State Development) as sole shareholder of ECHDC. The two non-voting, ex-officio director positions are held by the Erie County executive and the City of Buffalo mayor.