Laurence A. Stephens, age 87, of Lewiston, the husband of the late Joan (Warner) Stephens, entered into rest Thursday, Jan. 28, 2021, at Sisters of Charity/St. Joseph’s Hospital in Cheektowaga.

Laurence was born Sept. 10, 1933, in Niagara Falls, New York. He is the son of the late Wilfred and the late Alberta (Scott) Stephens. He attended elementary school in Amherst. In 1951, he graduated from LaSalle High School in Niagara Falls, where he played football, basketball and tennis.

Laurence served in the U.S. Army in the infantry during the Korean War, earning the Combat Infantry Badge as a rifle platoon sergeant in Company L, 14th Infantry Regiment, 25th Infantry Division. H went on to graduate from Buffalo State Teachers College, earning a bachelors and a master’s degree.

Laurence was a beloved mathematics teacher in the Niagara Falls City School District for 37 years, serving four years at Gaskill Elementary and 33 years at LaSalle Senior High School. There, he served at various times as coordinator of activities, a class adviser, math department chairman, and as a timekeeper/announcer for football, basketball and hockey games. He retired in 1995.

Laurence was president of the Niagara Falls Teachers for 16 years; president of the Niagara County United Teachers for 10 years; and former treasurer, vestryman and warden of St. Paul’s Episcopal Church in Lewiston. He was president of Rushford Lake Landowner’s Association for six years, a member of the United Way of Niagara Labor Advisory Council for many years, life member of the LaSalle Sportsmen’s Club, and VFW Downriver Post 7487 of Lewiston. With the VFW, he served as commander and in the Combat Infantryman’s Association.

Larry was a big kid who loved his toys (boats, motorcycles, snowmobiles), his family, friends, dogs, teaching, Rushford Lake, the Bills, dessert, cards with the guys, golf, dining out with his buddies, parties and jokes. He will live in our hearts and memories always.

Services will be held at a later date. Memorials may be made to Niagara Hospice, 4675 Sunset Drive, Lockport, NY 14094; or to VFW 7487 Downriver Post at lewistonvfw.org. 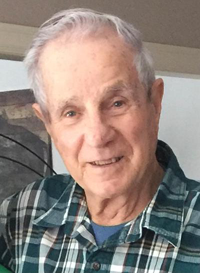