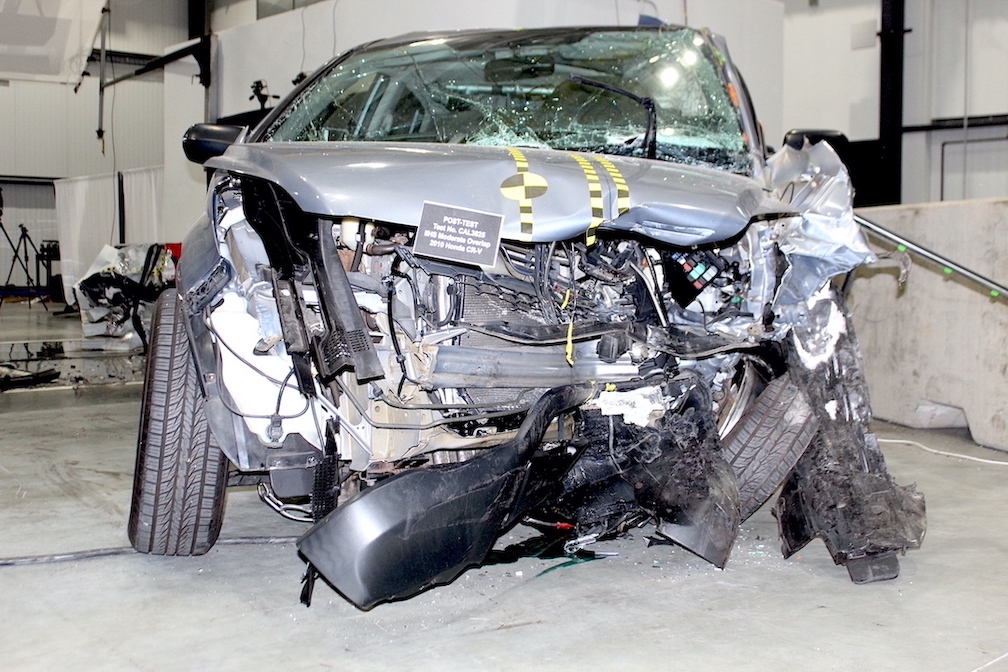 Is raising speed limit worth the risk?

Drivers want to save time, and local transportation agencies want to improve traffic flow, but at what cost? With posted speed limits increasing on many roadways around the country, a vehicle's ability to protect drivers in crashes is in doubt.

Small speed increases can have huge effects on crash outcomes, as shown in new crash tests by the AAA Foundation for Traffic Safety, the Insurance Institute for Highway Safety (IIHS) and Humanetics. The safety organizations conducted crashes – at Calspan Corporation’s testing facility in Western New York – at three different impact speeds (40, 50 and 56 mph) to examine how speed affects the likelihood and severity of occupant injury in a crash. They found the slightly higher speeds were enough to increase the driver's risk of severe injury or death.

√ At the 40 mph impact speed, there was minimal intrusion into the driver's space.

√ But at the 50 mph impact speed, there was noticeable deformation of the driver side door opening, dashboard and foot area.

√ At 56 mph, the vehicle interior was significantly compromised, with the dummy's sensors registering severe neck injuries and a likelihood of fractures to the long bones in the lower leg.

As the crash speed increased in the tests, researchers found more structural damage and greater forces on the dummy's entire body. 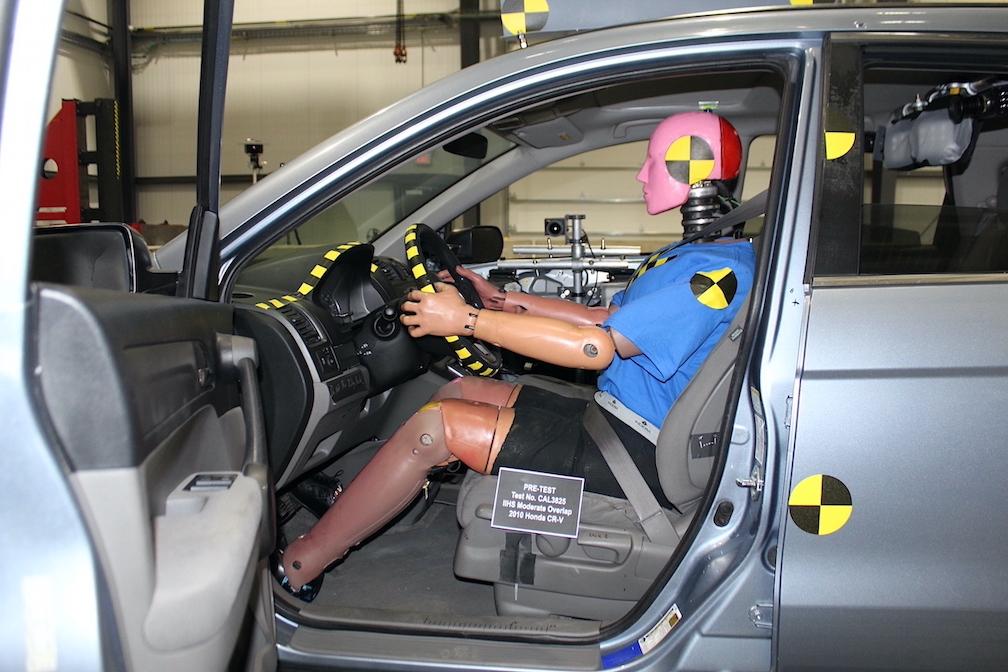 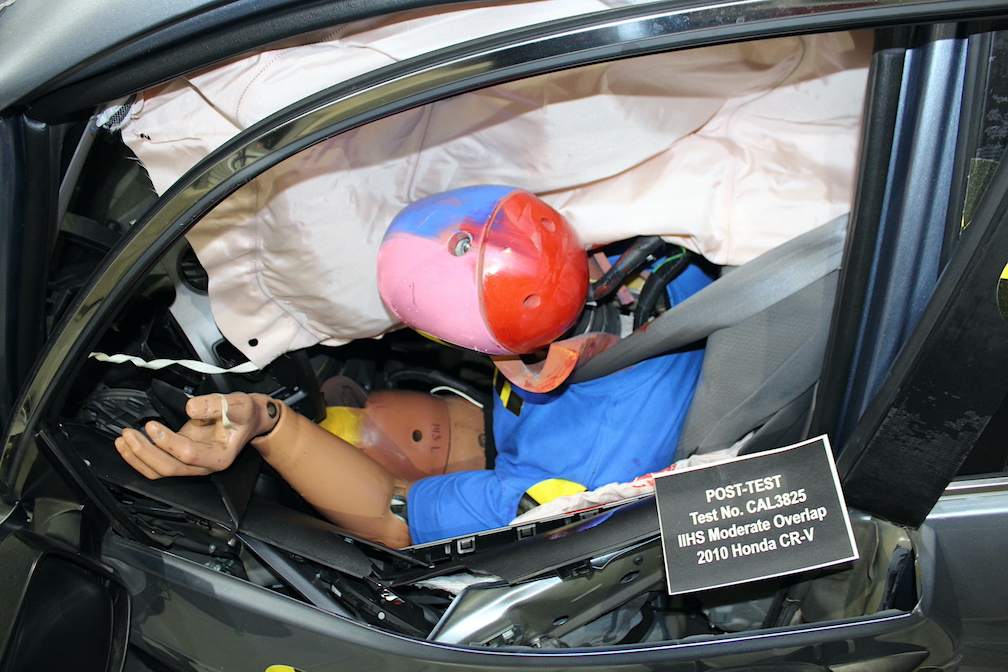 AAA Western and Central New York president and CEO Tony Spada, who also sits on the AAA Foundation for Traffic Safety board of directors, was present for the testing at Calspan.

“It’s really shocking to see the impact that the vehicle makes and what happens inside the car and then to see all the collateral effects – the windshield, the doors, the back seats – and of course what happened to the driver even though it was a dummy,” he said. “It’s shocking.”

Three 2010 Honda CR-V EX crossovers were used because they represented the average age (11.8 years) of a typical vehicle on U.S. roadways and earned the top rating in the IIHS moderate overlap front test.

"We conducted these crash tests to assess the effect of speeds on drivers and learned that a small increase could make a big difference on the harm to a human body," said Dr. David Yang, executive director of the AAA Foundation for Traffic Safety. "A speeding driver may arrive at their destination a few minutes faster, but is the tradeoff of getting severely injured or even losing one's life worth it if a crash occurs?"

AAA and IIHS urge policymakers to factor in this danger from higher speeds when considering speed limit changes.

"Higher speed limits cancel out the benefits of vehicle safety improvements like airbags and improved structural designs," said Dr. David Harkey, IIHS president. "The faster a driver is going before a crash, the less likely it is that they'll be able to get down to a survivable speed even if they have a chance to brake before impact."

Jack Jensen, vice president of engineering at Humanetics, said, “Our crash test dummies are instrumented with hundreds of sensors to measure the injury risk so that we understand the scientific limits of safety and injury prevention. Understanding that the risk of serious and permanent injury becomes significantly higher in crashes beyond statutory speed limits clearly demonstrates why there are limits in the first place.”

"Cars are safer than they've ever been, but nobody's figured out how to make them defy the laws of physics," said Harkey of IIHS. "Rather than raising speed limits, states should vigorously enforce the limits they have. This includes using proven countermeasures like high-visibility enforcement and carefully implemented speed-camera programs to consistently and equitably enforce speed limits 24/7."

Speed limits should not be raised or lowered only to manipulate traffic volume on a particular roadway. States are urged to use engineering and traffic surveys when setting maximum speed limits.

"Policymakers need to also think beyond enforcement to control speeds and should consider infrastructure changes based on road type to calm traffic flow appropriately so that posted speed limits are followed,” said Jake Nelson, AAA director of traffic safety advocacy and research.

This study is the second part of the AAA Foundation for Traffic Safety research examining the effect of posted speed limit changes on safety. In the foundation's first study, traffic engineers were asked how posted speed limits are set and what factors they consider in changing them.

About the research testing: The research tests were conducted at Calspan Corp. following the same protocol that is used for the IIHS moderate overlap evaluation; only the speed was varied. With a test dummy representing an average-sized male in the driver's seat, the cars were crashed with 40% of the vehicle's front on the driver side overlapping the barrier.

IIHS has been conducting this type of test, which simulates a head-on, partial-overlap impact between two vehicles of the same weight and size traveling at the same speed, since 1995. Since 2013, 100% of new vehicles have earned a good rating when tested at the 40 mph impact speed.

AAA Foundation for Traffic Safety: Established in 1947 by AAA, the AAA Foundation for Traffic Safety is a nonprofit, publicly funded, 501(c)(3) charitable research and educational organization. The AAA Foundation's mission is to prevent traffic deaths and injuries by researching their causes and by educating the public about strategies to prevent crashes and reduce injuries when they do occur. This research develops educational materials for drivers, pedestrians, bicyclists and other road users.

About IIHS: The Insurance Institute for Highway Safety (IIHS) is an independent, nonprofit scientific and educational organization dedicated to reducing the losses – deaths, injuries and property damage – from motor vehicle crashes. For more information, visit iihs.org.

About Humanetics: Humanetics is the global leader in the design, manufacture and supply of biofidelic crash test dummies, calibration equipment, crash sensors instrumentation, software modeling and active safety testing equipment. Its devices and simulation software are used to develop safety systems in vehicles, aviation and space rockets. In the automotive sector, Humanetics serves 100% of the OEMs and Tier I safety suppliers worldwide. For more information, visit humaneticsgroup.com.

About AAA Western and Central New York: As upstate New York’s largest member services organization, AAA Western and Central New York provides more than 887,000 members with travel, insurance, financial and automotive-related services. Since its founding in 1900, AAA has been a leading advocate for the safety and security of all travelers. Visit AAA at www.AAA.com or www.NewsRoom.AAA.com.