Rita M. Desemone of Grand Island passed away peacefully on Dec. 31, 2020, at the age of 93, surrounded by family and caregivers.

The wife of 59 years to the late Lawrence J. Desemone, she is the mother of James (Graciela) Desemone, John L. “Jack” (Lisa) Desemone and Cynthia (Stephan) Kovacs; and grandmother of Marcela, Cristina, Katherine “Katie,” Madeline ​“Maddii” and Faith. Rita is the sister of Delphine (late Walter) Grabowski, Geraldine (late Norman) Witkowski, Colleen (Thomas) Schaefer and the late Florence (late George) Lewandowski and Bernard (survived by wife Carroll) Lewandowski. She is also survived by many nieces and nephews.

Born in Buffalo, Rita graduated from Sloan High School and completed technical instruction in Kansas City, Missouri, in 1945 at the Central Radio & Television School. Following completion of her training, she became one of the first women ground radio operators for Capital Airlines at the Buffalo Municipal Airport.

Married in 1953, she and her beloved husband, Larry, built the family’s home on Grand Island, where they continued to live until present day. Though Rita remained at home after the birth of her children, she was able to utilize her exceptional sewing ability and establish a small alterations business.

Rita was also a skilled figure skater and involved the whole family in the sport, giving rise to the Desemone Family Skaters and a successful skate sharpening business she and Larry ran. She always enjoyed watching sports, especially the Buffalo Bills and Sabres, attending concerts and live theater, and travelling with Larry, particularly after his retirement. She embraced technology and actively participated in the computer club at the Grand Island Golden Age Center for many years.

Following the death of her husband, Larry, in 2012, she embraced yoga at Soma Cura Wellness Center to whom we are forever grateful. She continued to participate in live-streamed online classes with her granddaughter through most of 2020.

Most important in Rita’s life, however, was her Catholic faith. Barring any restrictions, a Mass of Christian Burial will be held at 9:30 a.m., Saturday, June 19, at St. Stephen R.C. Church on Grand Island. In lieu of flowers, memorials may be made to Hospice Buffalo, the Juvenile Diabetes Research Foundation or St. Stephen R.C. Church, Grand Island. 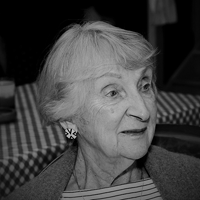