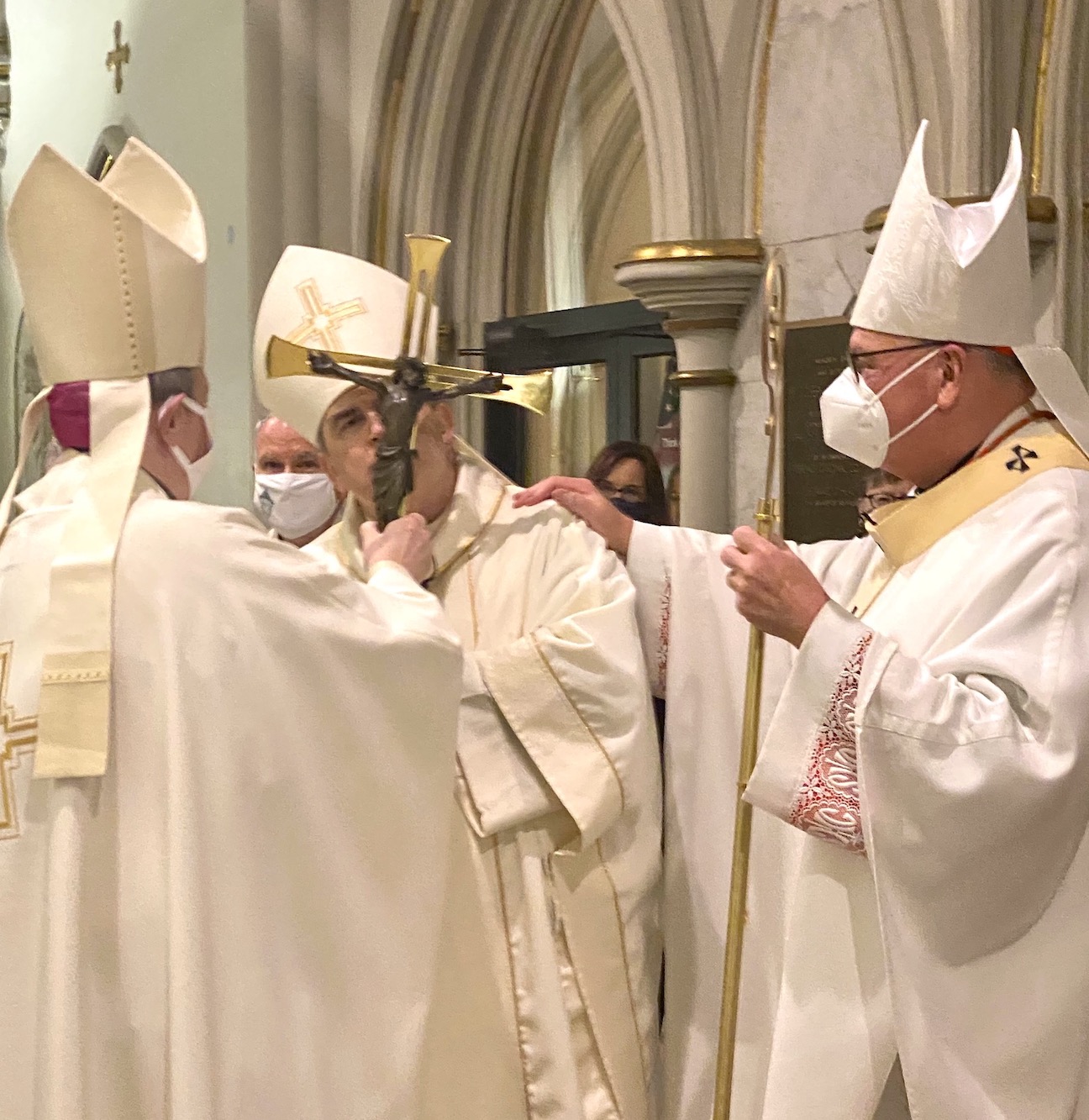 The Most Rev. Michael William Fisher was installed as the 15th bishop of the Diocese of Buffalo on Friday. The diocese said it was “a ceremony rich in the church’s ancient and sacred ritual, but substantially scaled-down due to the ongoing COVID-19 pandemic threat.”

His Eminence Timothy Cardinal Dolan, archbishop of New York, presided over the installation that the Apostolic Nuncio, Archbishop Christophe Pierre, Wilton Cardinal Gregory, Archbishop of Washington, D.C., and other specially invited guests were unable to attend, given prevailing quarantine requirements for those traveling to New York from out-of-town locations. A contingent representing diocesan ministries and parishes, schools, Catholic institutions and religious houses were on hand to greet Bishop Fisher during the liturgy.

During the rite of installation, Pope Francis’ apostolic letter of appointment was read by diocesan Chancellor, Sister Regina Murphy, SSMN. After the reading of the “papal bull” and it being presented to the diocesan college of consultors, Fisher was escorted by Dolan to the cathedra (bishop’s chair) where he officially assumed leadership of the Diocese of Buffalo.

“It’s with the greatest humility that I accept this call to now serve you as your 15th bishop, and which I view as a continuation of the assent to Christian discipleship, first offered on my behalf at baptism some 62 years ago by my wonderful and devoted parents, Margo and Bill,” Fisher said in his homily. “Together with my adoring grandparents who were such a presence and positive influence in our lives, I bring their memory to this altar today in a very special way, with the unqualified admission that all which has brought me to this point and enabled me over these many years to hear the often subtle voice of God – and to say yes again and again to his promptings – was made possible by their tremendous love and remarkable example of faith and faithfulness.”

Bishop Edward B. Scharfenberger, apostolic administrator of the diocese since December 2019 – following the retirement of Bishop Richard J. Malone – offered: “The good people of the diocese, whom I have been blessed to serve over the past year, have been blessed with a devoted and devout pastor who is eager to continue the work of renewal and define a new era of vitality and increased impact of Catholic faith and ministry throughout Western New York. I give thanks to God and to the holy father, Pope Francis, for the gift of his leadership and ministry that will most certainly bear much fruit in the years ahead.” 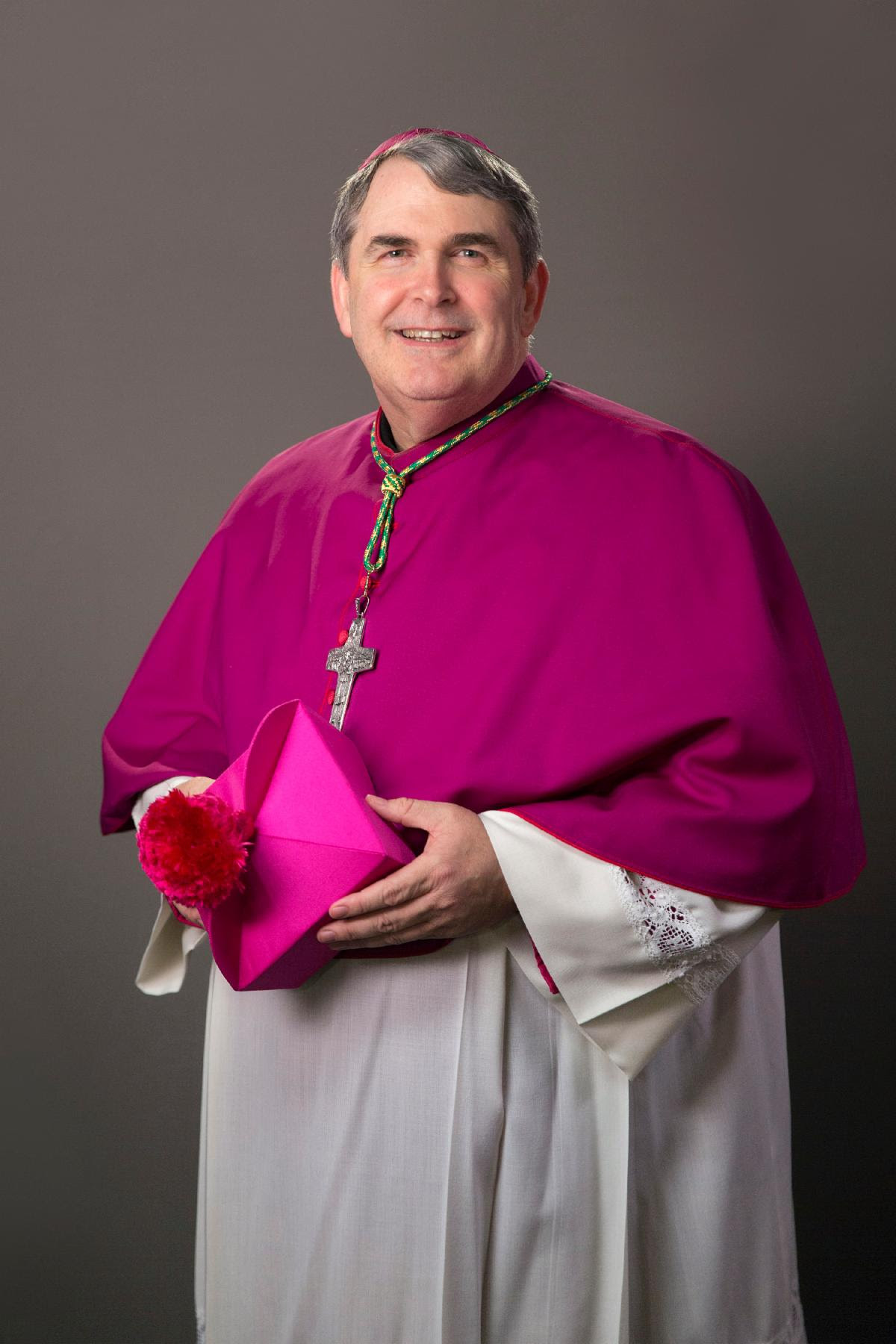 The Rev. Michael William Fisher, newly appointed bishop of the Diocese of Buffalo.

Fisher highlighted his priority to be an “instrument of healing” for those who have suffered abuse and have been disenfranchised from the sacramental life of the church: “In this work of renewal that together must be our constant preoccupation, we must be ever mindful of those who have turned away – not because of any failing on their part – but because they have been deeply harmed by the sin and failing of those they trusted most. ... To all who have suffered and continue to feel like they no longer belong or have a place within the family that once nurtured their faith and contributed to their identity, I pledge to listen; to comfort however I can; to understand as best I am able; and to exert every effort within my capacity to be an instrument of your healing.”

Committing to defining a “new era of Catholic education” in the diocese he now leads, Fisher emphasized the vital role educators and those and those who support and work in our schools and parish faith formation programs in shaping the lives and prospects of young people.

“One of the aspects that has so defined and distinguished your legacy here in the Diocese of Buffalo is the commitment to educating the young – instilling in their young minds and hearts a sense of purpose, conviction and personal responsibility that, of course, is rooted in Christian discipleship. We have no more urgent priority than to continue this proud legacy of Catholic education, nurturing the potential of our youth; addressing their needs, guiding and supporting them as they sort out the often conflicting demands and influences of our present age.”

Fisher, 62, a native of Baltimore and the oldest of five children born to Margo and William (“Bill”) Fisher (now deceased), was ordained to the priesthood by Cardinal James A. Hickey on June 23, 1990. He was assigned to Sacred Heart parish in La Plata, Maryland, and in 1995 as a pastor of Holy Family parish in Hillcrest Heights. Four years later, he became pastor of St. John Neumann parish in Gaithersburg.

In 2005, then-Father Fisher was named a chaplain to His Holiness John Paul II (a distinction that entails the title of “monsignor”), and was appointed that same year as vicar general for the apostolates that entailed overseeing archdiocesan ministries for education, ethnic ministries, social justice and service, parish life and youth ministry. The following year, then-Monsignor Fisher was appointed vicar for clergy and secretary for ministerial leadership, with responsibility for vocations, formation and care of the clergy for the archdiocese. Upon the appointment of Archbishop Wilton Gregory (now Cardinal Wilton Gregory) in 2019, Fisher maintained his responsibilities as secretary for ministerial leadership.

Named an auxiliary bishop for the Archdiocese of Washington by Pope Francis on June 8, 2018, Fisher was ordained to the episcopate on June 29, 2018, at the Basilica of the National Shrine of the Immaculate Conception. Throughout his 30 years of priestly ministry, Fisher has served on various boards and committees of the Archdiocese of Washington, including, the college of consultors, priest council, administrative board, priest retirement board, clergy personnel board, deacon review board, deacon council, needy parish committee, as well as the “Forward in Faith” committee. He also serves as an ecclesiastical counselor to the Centesimus Annus Pro Pontifice Foundation.

Much of Fisher’s ministry has involved the continuing education of priests, particularly in aiding new pastors in their roles and the planning and implementation of ongoing clergy training via convocations and retreats.