In Memory of Jean Wholahan

We should not let the death of Jean Wholahan at age 106 on Jan. 7 go without remembering and appreciating her amazing, very long life on Grand Island. She has been an inspiration for me since the 1950s, when her husband, Allan, and I worked on the Citizens’ Committee for the High School. It was Jean who encouraged me to join the League of Women Voters, which became a major part of my life.

In her quiet, modest way she worked diligently on various committees for an informed electorate. She took on necessary work like League budget preparation. It was Allan who had the first computer of anyone we knew, and who was deeply involved in using his new skills to work with us on League publications, like preparing “Know Your Officials.”

Many meetings and much committee work led to our deep ongoing friendship. As Jean aged, she continued her lifelong interest in good government, and even when her eyesight was failing, she managed to follow news events. She never missed a voting opportunity.

Her ability to remain independent until well after her 100th birthday astonished her friends. Her clear memory allowed her to share with me very early experiences of her childhood and early youth. Her interest in annual geranium plantings and activities of her little Island Presbyterian Church, of which she was a founding member, continued throughout her life. Her optimism never failed!

I drove her to a garden nursery for her to choose her geraniums each spring. I remember the one that turned out to be the last time. As I was dropping her off back at her home, Jean thanked me and said, “Will you do this for me next year?” I replied, “Sure, Honey!” 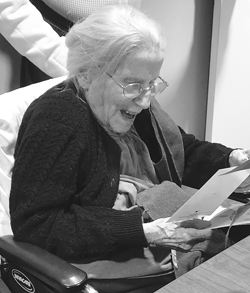