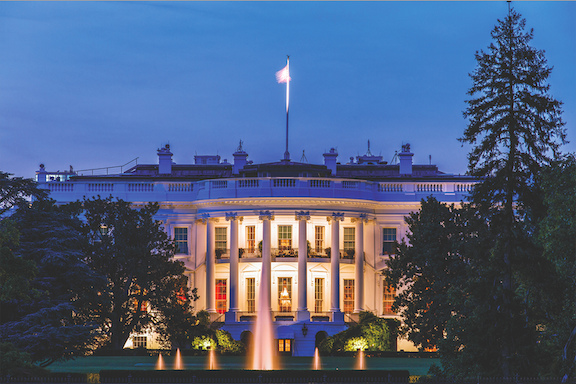 The White House awaits what will happen in the next week. (Metro Creative Connection image)

The House of Representatives on Wednesday adopted H.Res. 24, impeaching President Donald Trump “for high crimes and misdemeanors” by a vote of 232-197. This comes in the wake of last week’s mass descent on the Capitol Building in Washington, D.C., interrupting the process to certify Joe Biden as Trump’s successor.

Congressman Brian Higgins, D-NY-26, said, “The facts are clear and compelling: President Trump incited an insurrection against America’s democracy. Through his words and actions, Trump publicly broadcast the evidence in the lead-up to the attack. The outcome of his actions was on full display for the world to see, with members of Congress serving as both targets and first-hand witnesses. Efforts to minimize, accept or excuse this insurrection represents a failure by members to live up to our oath and a failure to protect the democracy this country was founded on and other nations have aspired to model. Members who oppose impeachment are either wrong, weak, or both.”

The articles of impeachment legislation (H.Res.24), cosponsored by Higgins and approved by the House, finds Trump “has demonstrated that he will remain a threat to national security, democracy, and the Constitution if allowed to remain in office, and has acted in a manner grossly incompatible with self-governance and the rule of law” warranting impeachment and removal.

The United States Constitution dictates the impeachment process and justification, in Article 1, Section 2, giving the House of Representatives the “sole Power of Impeachment”; and in Article 2, Section 4, compelling impeachment of the president for “treason, bribery or other high crimes and misdemeanors.” The Constitution provides that the House of Representatives “shall have the sole Power of Impeachment” (Article I, Section 2), and that “the Senate shall have the sole Power to try all Impeachments … (but) no person shall be convicted without the Concurrence of two-thirds of the Members present” (Article I, Section 3). The president, vice president, and all civil officers of the United States are subject to impeachment.

“The House of Representatives has voted to impeach the president. The Senate process will now begin at our first regular meeting following receipt of the article from the House,” he said. “Given the rules, procedures, and Senate precedents that govern presidential impeachment trials, there is simply no chance that a fair or serious trial could conclude before President-elect Biden is sworn in next week. The Senate has held three presidential impeachment trials. They have lasted 83 days, 37 days, and 21 days, respectively.

“Even if the Senate process were to begin this week and move promptly, no final verdict would be reached until after President Trump had left office. This is not a decision I am making; it is a fact. The president-elect himself stated last week that his inauguration on Jan. 20 is the ‘quickest’ path for any change in the occupant of the presidency.

“In light of this reality, I believe it will best serve our nation if Congress and the executive branch spend the next seven days completely focused on facilitating a safe inauguration and an orderly transfer of power to the incoming Biden administration. I am grateful to the offices and institutions within the Capitol that are working around the clock, alongside federal and local law enforcement, to prepare for a safe and successful inauguration at the Capitol next Wednesday.”

Congressman Chris Jacobs, R-NY-27, voted against impeachment. He said, “The events of last week were horrific, and the violence we witnessed has no place in our democracy. Those responsible must be held accountable for their actions. I want to thank the brave men and women of the United States Capitol Police who showed true heroism while protecting me, my colleagues, and thousands of staff members and aides.

“Our nation is clearly divided. Healing this division and moving the country forward should be our first and foremost priority. This rushed impeachment proceeding accomplishes none of these goals, especially given that the president has agreed to an orderly and peaceful transition of power on Jan. 20, 2021.

“Impeachment has been used rarely in our nation’s history, and when it has been used the House of Representatives has carried out a full and deliberate process complete with an investigation, hearings led by the Judiciary Committee, and a mark-up of the articles of impeachment before a vote is called. We witnessed none of that today. The process was rushed, avoided due process, and set a dangerous precedent to further politically weaponize impeachment.

“Because of the abbreviated process, the short length left in the president’s term, and his commitment to a peaceful transition, I voted against the articles of impeachment today. Our nation has significant challenges we still need to address – including the ongoing COVID-19 crisis.

“Our focus should be on tackling these very serious and pressing issues while we work to heal a deeply divided nation. Now is the time to move forward, not take additional divisive action at a time when our country cannot bear it.

“The peaceful transition of power is a hallmark of our American democracy; it is what sets us apart. Now more than ever, I believe all Americans need to see that transition process occur, as it always has, to reaffirm that our democracy is still strong, healthy and unbreakable.”

This is the second time Trump has been impeached, with the House previously voting to impeach for previous offenses on Dec. 18, 2019. Trump is one of three U.S. presidents to be impeached, and the only one to be impeached twice.

Though Biden’s inauguration is set to be virtual, it is expected people will again march in protest in Washington, D.C. Trump said, “In light of reports of more demonstrations, I urge that there must be no violence, no lawbreaking and no vandalism of any kind. That is not what I stand for, and it is not what America stands for. I call on all Americans to help ease tensions and calm tempers. Thank you.”

Leading up to last week’s ruckus, Trump had stated publicly and via social media his belief the election results were tampered with, and that the results were not accurate.

On Tuesday, Higgins, D-NY-26, announced passage of House Resolution 21, which called on Vice President Michael Pence to activate the cabinet and immediately use the authority provided, under section 4 of the 25th Amendment, to declare Trump incapable of executing the duties of his office.

Higgins said, “By inciting a mob to commit a domestic terrorist attack on our nation, President Trump has proven himself unfit and incapable of leading this country. For the sake of our democracy and safety of Americans, he must be relieved of the responsibilities he has clearly already abandoned.”

A press release from Higgins stated, “Following months of lies by President Trump and others about the validity of the election, on Jan. 6, thousands of rioters stormed the United States Capitol, destroying property in an attempt at insurrection, which resulted in the death of six people.”

Adopted in 1967, the 25th amendment to the United States Constitution ensures a line of succession by placing the vice president in charge should the president be unable or unwilling to discharge the duties of their office. The House Resolution, cosponsored by Higgins, called for Pence and the cabinet to utilize section 4 of this amendment to declare the president’s inability to lead and assign his duties to the vice president.

Jacobs said “The Constitution entrusts the vice president and the cabinet with the authority to invoke the 25th Amendment, and it is only intended to be used when a president is incapacitated – not as means of punishment. Congress has no place in this process and the vice president’s decision not to invoke the 25th Amendment makes tonight’s vote no more than political posturing from Speaker Pelosi. At a time when our nation cannot bear more division, the speaker should pull consideration of this resolution from the floor and instead work with us to heal the country.”

In a letter to House of Representatives Speaker Nancy Pelosi, Pence wrote, “Every American was shocked and saddened by the attack on our Nation’s Capitol last week, and I am grateful for the leadership that you and other congressional leaders provided in reconvening Congress to complete the people’s business on the very same day. It was a moment that demonstrated to the American people the unity that is still possible in Congress when it is needed most.

“But now, with just eight days left in the president’s term, you and the Democratic Caucus are demanding that the cabinet and I invoke the 25th amendment. I do not believe that such a course of action is in the best interest of our Nation or consistent with our Constitution. Last week, I did not yield to pressure to exert power beyond my constitutional authority to determine the outcome of the election, and I will not now yield to efforts in the House of Representatives to play political games at a time so serious in the life of our Nation.”

Rather, Pence said this should be a “time to heal” as Biden prepares to be sworn-in as the next president.