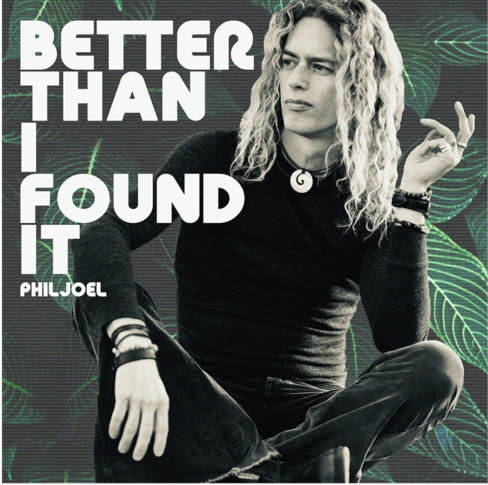 Among Christian music’s most recognizable faces and voices for more than two decades, singer/songwriter, author and New Zealand native Phil Joel is set for an anticipated return to the solo spotlight with “Better Than I Found It” on Jan. 22. The six-song EP – written, recorded and produced entirely by Joel in his home studio during last year’s quarantine – is now available for preorder.

“I’d felt for quite a while that I needed to take some time and musically get back to simply making art, but I didn’t know how I was going to make it happen,” Joel shared. “Well, 2020 made it happen for me. In March, we got word that touring was off until further notice, so I went home and locked myself away in my studio. It put me in a position to have to make production decisions alone and create a sound that’s truly me.”

Kicking off with the catchy, Beatles-esque title cut – a plea to leave the world better than we found it – the collection finds Joel reflecting on a range of timely topics, including the embrace of a simpler life; seeking unity in a divided nation; offering comfort for the hurting; and mending broken relationships.

“The idea of us all taking responsibility to care for our fellow man, our nation and our planet has really been in the forefront of my mind for the last couple of years, so recording these songs now seemed like perfect timing,” Joel said. “Right now, we’re all being forced to think about the future and what kind of world we want to live in – not only for ourselves and our kids, but for our neighbors and their kids and grandkids, too. It’s a time to ask some big questions about where we are and how we got here. But more importantly, it’s about who we want to be as we move into this delicate new future. I’ve tried to explore those questions and reflect the struggles they pose, while also presenting the hope of a better tomorrow.”

Additional highlights of “Better Than I Found It” include “In This Together,” which expectantly declares, “There has got to be a way for us to live in peace down here/and we dismantle our fears/collect each other’s tears”; “Sailing Speed,” an ode to the pursuit of life’s simple joys; and EP-closer “Alright,” an impassioned call to unity showcasing spoken word interludes from President John F. Kennedy and Dr. Martin Luther King Jr.

Auckland native Joel first arrived in the U.S. in 1994 to join one of Christian music’s most iconic bands: Newsboys. During his 12-year tenure in the Grammy-nominated, Platinum-selling group, Joel was featured on such seminal albums as “Take Me To Your Leader” and “Step Up To The Microphone.” Rejoining Newsboys in 2018, along with founding member Peter Furler, the supergroup has since played hundreds of shows around the country and released “Newsboys United” in 2019.

In addition, Joel has seven solo recordings to his credit; he founded and fronted the acclaimed worship band Zealand; and his first book, “Redwoods and Whales: Becoming Who You Actually Are” – a collection of personal stories and truths learned from his life and musical journey – was published in 2019 by Thomas Nelson’s Emanate Books.