He will be most remembered for his service to the community as a physician, his love for his family, his quick wit and intellect, his ability to tell a story and make people laugh, and his love of the outdoors. Sweeney was a husband, father, grandfather, physician, gardener, outdoorsman, storyteller, dance partner extraordinaire, and consummate impromptu comedian.

Additional community volunteerism included coaching the Niagara Pioneer House Soccer League, serving as treasurer of the Lew-Port Sports Boosters, and sitting on the board of advisers of Niagara University.

He was born in the Bronx on May 13, 1935, the son of Frank and Mary (McGinty) Sweeney, and resided at many NYC addresses in his early years before settling in Jamaica, Queens. Sweeney attended Xavier High School in Manhattan, riding the subway each day and using this time to translate Latin assignments. Upon graduation, he attended St. Peter’s College in Jersey City, New Jersey, again doing his homework on his subway commutes. Sweeney attended NYU Medical School to pursue his lifelong dream of becoming a doctor.

In 1961, six days after medical school graduation, Sweeney married Monica (Cerina) and started his family life. Over the following five years, he completed his residency at St. Vincent’s in NYC while welcoming three children into the family: Kathleen, Michael and John. Upon finishing his medical training, he was inducted into the U.S. Army and stationed at Fort Wainwright in Fairbanks, Alaska.

The entire family moved to Alaska where they lived for the next two years, while welcoming a fourth child, Robert. In Alaska, Sweeney developed a love for the outdoors, which stayed with him the rest of his life. He spent time hunting, fishing and trapping.

Upon discharge from the Army in 1968, the family returned to NYC, where they would decide on a next adventure. Later that year, Sweeney joined an OB/GYN practice (doctors Connolly and Gordon) and the family moved to Lewiston, then later to their property on the lake in Youngstown. Here, they welcomed their fifth child into the family: Richard.

Along with his partners (doctors Perez and Greene), Sweeney practiced OB/GYN for 27 years. He was very proud of having delivered an estimated 2,500-plus babies during his career.

Sweeney retired from medicine in 1995 and turned his focus to manicuring his property on the lake into an impressive showcase of Japanese gardens. He loved to tour visitors and friends through the property, proudly showing his creations.

Arrangements were made through the Rhoney Funeral Home in Lewiston. Visit www.rhoneyfuneralhome.com for guest register. 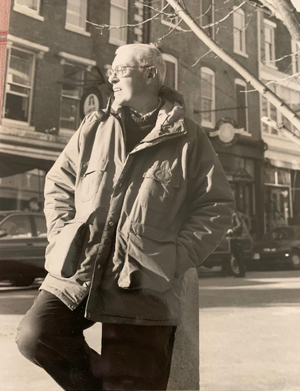