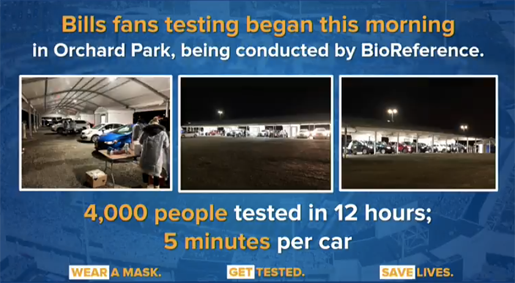 Image courtesy of the Office of Gov. Andrew M. Cuomo

Speaking to the press on Wednesday, Gov. Andrew Cuomo referenced efforts to test Buffalo Bills playoff game ticketholders for the coronavirus ahead of Saturday’s game with the Indianapolis Colts.

“We started the drive-thru testing this morning: 4,000 people will be tested in 12 hours, five minutes per car. It just gives you an idea of what you can do to scale in terms of testing. And again this is a model for us to see how testing works to open venues, because we have to get the economy moving,” he said.

On Dec. 23, Cuomo discussed plans to allow fans to attend the Buffalo Bills' first home playoff game in more than two decades under strict COVID-19 protocols. One week later, he announced the final pilot plan for allowing fans to attend the game.

Under the pilot, which was developed cooperatively between the Bills, New York state and BioReference Laboratories, 6,700 fans will be allowed to attend the game after first obtaining a negative COVID-19 test result being allowed into the stadium.

A press release noted, “Contact tracing will also be conducted after the game. This is the first stadium reopening pilot plan in the nation to require these measures and, if successfully implemented, it could serve as a model for reopening entertainment venues across New York.”

"Bills fans have waited decades in order to attend a home playoff game and we have worked to build an innovative pilot program to make that happen safely," Cuomo said. "All season long, the Bills' stellar play has captured a certain energy and charisma that is undoubtedly infectious, but we all need to be smart. We're in control of our destiny and how we act is going to determine what comes next. So while this is a time for excitement and celebration, it's critical that everyone follow the guidelines and practice the safe behaviors we know work. If everyone does their part, I believe this pilot will be successful.”

New York State Health Commissioner Dr. Howard Zucker said, "Throughout this pandemic, Gov. Cuomo and the Department of Health have repeatedly researched and instituted metrics to help us manage the spread of this dangerous disease. The public health analysis from this pilot project will help us safely plan for future large gatherings and serve as a model for other states. Regardless of whether you attend in person or not, we urge you to be safe and be smart."

Buffalo Bills' owners Kim and Terry Pegula said, "We know that fans have been waiting 25 years to be able to attend a home playoff game. We thank the governor and his entire team, and BioReference for working diligently with the Bills organization. We all know what needs to be done and we all need to do our part, so do the fans – please remember to be compliant, wear your mask and socially distance.

Under the plan, team staff will control all exit and entry points to the stadium and only fans with a documented negative COVID-19 test will be allowed inside. Testing will be conducted in partnership with BioReference. Once inside the stadium, fans will be required to wear a mask at all times and adhere to strict social distancing protocols. Fans who refuse to comply with these protocols will be removed from the stadium. Ushers will also be present throughout the stadium to ensure all fans are in compliance.

As part of the state's review, personnel from the Department of Health traveled to other stadiums outside of New York where similar protocols are in place to confirm their effectiveness.

Tailgating remains banned under this plan and New Yorkers are being reminded to avoid gatherings and parties before, during and after the game as these events are “prime for viral spread.”

With Democrats now poised to take control of the U.S. Senate, Cuomo said he would have to rewrite his State of the State address, which he will present Monday. As such, the governor – a Bills fan – said he couldn’t attend the 1:05 p.m. game, which will be televised on CBS (WIVB-TV Channel 4).

“I'm going to give my Bills ticket to a nurse from Erie County Medical Center, ECMC, as a way of saying thank you and honoring all health care heroes, and I will be doing that; so I'll be here working on the State of the State, which will be a labor of love actually, because it's going to be better news, and we deserve better news,” Cuomo said.