Oxford Pennant, the Buffalo-based designer and manufacturer of wool felt pennants, flags and banners, is helping Western New York celebrate the Buffalo Bills clinching the AFC East Division title and playoff run through the installation of 40-foot pennants atop Seneca One. Oxford Pennant brought the idea to the Bills, Douglas Development, Ace Flag and M&T Bank, who agreed to bring this supersized celebration to life. The effort seeks to uplift the region during this milestone moment.

“The Bills go big for Buffalo, so Oxford Pennant went big for the Bills,” said Dave Horesh, co-founder of Oxford Pennant. “It's been an incredibly difficult year for so many in our community, and the Bills have been a source of happiness. We want people to see this and unite in our excitement and pride in our hometown during this special time for our team and region.”

The pennants, designed by Oxford Pennant and produced by Ace Flag, sport the “Let’s Go Buffalo” rallying cry and cover all four faces at the top of Seneca One, downtown Buffalo’s tallest building. The placement of the pennants represents the four sides of the city and extends to Bills fans in all corners of the region.

“When we as die-hard Bills fans began the redevelopment at Seneca One, we wanted to build a community hub for everything from technology to entrepreneurship, culture and programming,” said Greg Baker, director of development at Douglas Development. “When Oxford Pennant approached us with this idea, we knew immediately that it would be something to boost the region and we wanted to be a part of it.” 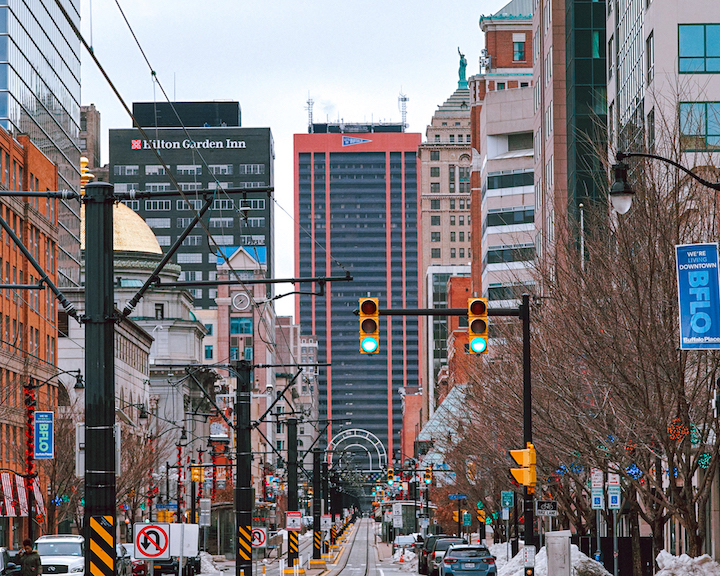 In addition to the installation at Seneca One, M&T Bank will be flying a fifth 40-foot pennant on the east façade of its M&T Center, another highly visible office building in the heart of downtown Buffalo.

“M&T Bank has long been a partner of the Buffalo Bills and Oxford Pennant and a champion of Western New York, so joining Oxford Pennant in this fun and unique celebration is a natural fit,” said Richard Gold, president and chief operating officer at M&T Bank. “During a time when most of us are not able to watch and celebrate together, this is a great way to show the community that we’re all here cheering alongside one another.”

The pennants will remain up through the playoffs. Fans can purchase special edition 9-inch by 27-inch replicas to commemorate this historic moment, as well as three newly released, limited-run mini pennants. All pennants are manufactured in Buffalo and are available for purchase at OxfordPennant.com/Bills. Additionally, the company has released a free, printable version of the playoff pennant on its website for kids to print and color at home.

As Bills fans have become known for their charitable giving, Oxford Pennant will donate a portion of the proceeds from its playoff pennant and all Buffalo Collection sales, from now through the end of the season, to benefit the John R. Oishei Children’s Hospital.

“Support of the Buffalo Bills is second to none in our community. It’s awesome that everyone in Buffalo can be part of the excitement as ‘Let’s Go Buffalo’ is displayed larger-than-life in some of the most prominent parts of our city,” said Dan Misko, senior vice president of business development at Pegula Sports and Entertainment. “Dave Horesh and Oxford Pennant have done an outstanding job connecting our fans with ‘victory banners’ all season long, and have taken that connection to the next level in celebration of our AFC East title.”

Oxford Pennant partnered with the Bills during the 2020-21 NFL season to design and manufacture custom “victory banners” to honor each win. The banners have been featured on the Bills’ and Oxford Pennant’s social media accounts, and all designs, as well as the replica playoff pennants and apparel, are available at OxfordPennant.com.

Founded in 2013, Oxford Pennant is a Buffalo-based designer and manufacturer of wool felt pennants, banners and flags that are inspired by American sports traditions. All products are made using high-quality, American-made products. To learn more or shop online, visit OxfordPennant.com.