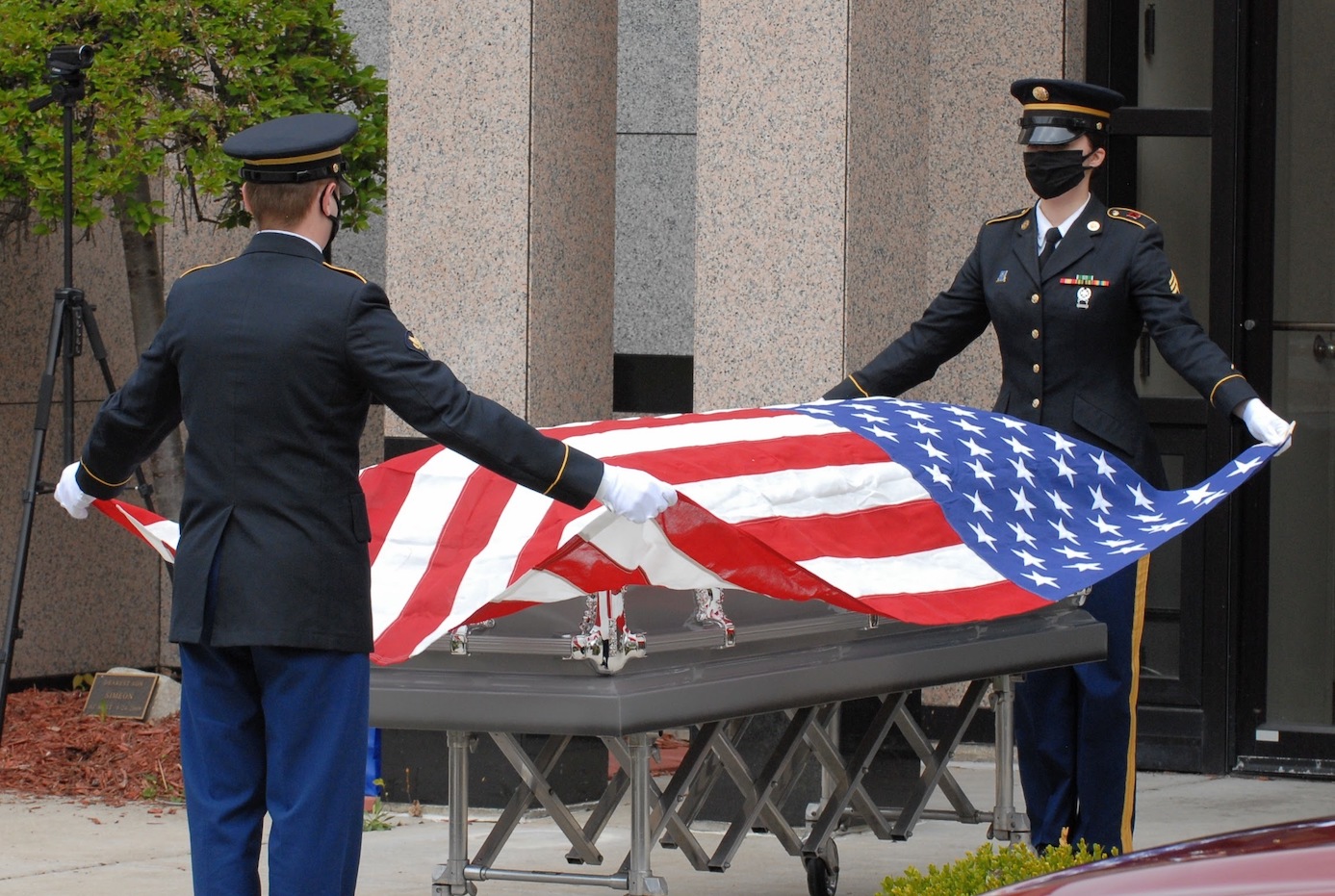 Spc. Austin Dycha and Sgt. Nikole Clark drape the flag over the casket of U.S. Army Air Force Cpl. Raymond Kegler at his May 14, funeral in Lackawanna.

National Guard conducts fewer funeral honors in 2020 due to pandemic

The honor guard soldiers and airmen expected to conduct 8,835 military honors at veteran's funerals by the end of 2020.

A 2000 federal law mandates former members of the U.S. military who served on active duty or the reserves and who did not receive a dishonorable discharge are eligible for military funeral honors.

All former service members' funerals must include the folding and presenting of an American flag to his or her survivors and the playing of taps. The two-person teams usually use an electronic bugle – a bugle with a sound system and speaker inside.

Restrictions on the number of people who could be present at funerals early in the pandemic and many families deciding to not hold a formal burial, or funeral, drove the decline in numbers, said Peter Moran, the coordinator for the New York Army National Guard's military funeral honors program.

A Veterans Administration decision to discontinue graveside services and military funeral honors at national cemeteries for part of the year, also drove the decline in funeral missions, Moran said.

Air National Guard Tech Sgt. Anthony Villalon, the noncommissioned officer in charge of the honor guard for the 106th Rescue Wing at Gabreski Air National Guard Base, said his teams also were invited to fewer funerals: "We saw a significant decline in the months of March, April and May. These months are usually are busiest months, I believe the lockdowns and the overall impact of COVID risk caused the decline.”

The 106th Rescue Wing team is traditionally the busiest in the National Guard because of the two million residents of Long Island and the fact that Calverton National Cemetery is located on Long Island.

Funeral homes were conducting funerals quickly and not requesting honors, although funeral directors said they expected to request military honors at later memorial services, according to Master Sgt. Sara Pastorello, the public affairs superintendent for the 105th Airlift Wing at Stewart Air National Guard Base in the Hudson Valley.

While the COVID-19 pandemic played a significant part in this, Snyder said he thinks many families put off services until their loved one could be interred in a new veterans cemetery that opened on Dec. 18.

In March, there were 513 funeral missions, which went down to 229 in April, 337 in May and 511 in June before climbing back up to the average when restrictions on funeral attendance were loosened, Moran said.

New York, and especially New York City and its suburbs, were hit early by the COVID-19 pandemic.

As of Dec. 23, New York Army National Guard military funeral teams had provided honors for 7,005 families. It was expected the funeral teams would conduct 145 more funerals by Dec. 31, for a total of 7,190, Moran said.

The New York Army National Guard provides honors for those who served in the Army or, in the case of World War II veterans, the Army Air Forces.

Families who decided to forgo military honors can apply for them to be conducted later through their funeral director, Moran said.

There are 40 soldiers who work full-time providing military funeral honors and another 50 who can be called upon on a part-time basis when required, according to Moran.

Both Army and Air Guard honor's teams had to change the way they do things to cope with the pandemic. The Army National Guard honor guard soldiers immediately began wearing masks, Moran said. They also practiced staying 6 feet away from mourners.

The most significant change was during the presentation of the flag to the veteran's family, Moran said.

Traditionally, the leader of the team kneels and presents the flag to a family member on "behalf of a grateful nation."

Instead, the flag was folded and placed on the coffin or behind a cremains urn and the soldier made their remarks from 6 feet away, he said.

The Air Guard made this change too and it was tough, Villalon said. "It was a learning curve not being able to be as social with the mourners as possible. It has been a unique challenge for us, because we are a people person function of the Air Force."