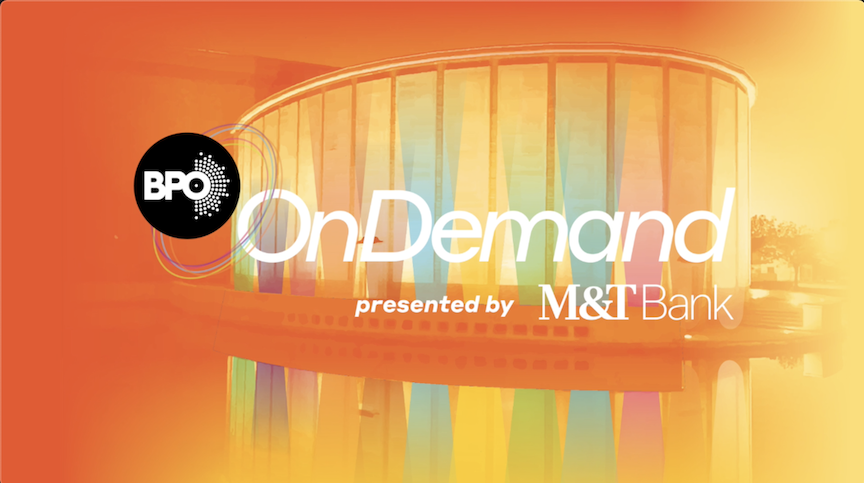 Understanding the power of music during these unprecedented times, the Buffalo Philharmonic Orchestra recently announced the extension of its “BPOnDemand” series through the first quarter of 2021.

A press release said, “The popular video-streamed performance series, presented by M&T Bank, uses state-of-the-art audio and video recording technology to bring the magical acoustics of Kleinhans into the living room of patrons via their home computer or mobile device. The series has allowed the BPO to perform exciting repertoire not normally available to the full orchestra, and helps to ensure that the 73 full-time musicians of the BPO remain employed.”

Double-bassist Jonathan Borden said, “The musicians are so grateful to the Western New York community for keeping the music alive. Thousands have tuned in to our ‘BPOnDemand’ series, and we have been able to provide new musical offerings for all ages as well.”

The BPO has been able to continue its “Music for Youth” concert series for local area students virtually during this time, and has started a listening club for its teen outreach program, “Symphony Scholars,” which Borden leads.

“It’s an amazing and rewarding time for us musicians, to be able to continue our work when so many of our orchestra peers have scaled back their seasons or canceled them altogether,” he said.

The BPO is awaiting “New York Forward” guidelines for reopening large indoor concert venues such as Kleinhans Music Hall. Until clearance is received to reopen for live audiences, “BPOnDemand” performances will continue to be broadcast at 7 p.m. Tuesdays and will be available on-demand for 30 days thereafter. The series is available to all current 2020-21 season subscribers for free, as well as those patrons near and far who wish to purchase a virtual ticket on a concert-by-concert basis. Tickets are $10 each (plus applicable fees). Compose-your-own multiconcert ticket packages are available as well – 10 concerts for $89, five concerts for $46, or three concerts for $33.

The press release noted, “Music Director JoAnn Falletta and the BPO musicians have taken immeasurable pleasure in being able to continue performing for audiences in Western New York and beyond, albeit virtually, and look forward to continuing the ‘BPOnDemand’ series.”

Falletta said, “The musicians and I are very happy to be able to reach out to our audiences in this special way. It is inspiring for us to play together on stage, and to know that people are able to see and hear us on demand.”

Revisions to the 2020-21 season repertoire announced this past January have been necessary in order to accommodate an orchestra of socially distanced size. Previously announced guest artists will be reengaged in future seasons. Pops series headliner Chris Botti, slated for a special Valentine’s Day concert, has expressed sincere disappointment that he will not be able to perform for Buffalo audiences this season, but has graciously committed to a performance on the 2021-22 season. Details to be announced later.

Falletta, Principal Pops Conductor John Morris Russell, and the BPO leadership team are closely monitoring the ever-evolving pandemic situation and have prepared alternative programs that will meet social distancing guidelines. The revised January through March 2021 schedule for “BPOnDemand” is as follows:

√ “From the Heart of the Orchestra”

MOZART Piano Concerto No. 23 in A major

A combination of early blues, French march music, and classical song, ragtime was born and bred in New Orleans. Scott Joplin, Jelly Roll Morton and W.C. Handy are the musical innovators who created the exciting, joyous and sophisticated melodies that became the foundation for jazz and popular music of the past century, influencing other musicians including George Gershwin. Songs include “The Entertainer,” “Maple Leaf Rag,” “King Porter Stomp,” “St. Louis Blues” and “Rialto Ripples.”

MOZART Symphony No. 29 in A major

The lyrical violin concerto of Joseph Bologne, Chevalier de Saint-Georges is performed by young virtuoso Randall Goosby, a former winner of the Sphinx Concerto Competition for Black and Latinx artists. The program also celebrates the groundbreaking achievements of Zwilich, the first female to win the Pulitzer Prize for Music, a sensual dreamscape by Debussy, and Mozart’s enchanting yet spirited symphony.

Trumpeter, arranger and conductor Jeff Tyzik currently serves as principal pops conductor of the Rochester Philharmonic Orchestra. Known for his inventive programming, this concert recreates a sultry, passionate evening of Latin music from Cuba, Spain, and Argentina, from steamy tangos to seductive ballads.

ARENSKY Variations on a Theme of Tchaikovsky

Composed as a memorial to his countryman, Arensky’s lyrical work reinvents a theme from Tchaikovsky’s “16 Songs for Children,” while fellow compatriot Shostakovich prophesied his chamber piece, colored by the WWII destruction of Dresden, would be his requiem. The program concludes with the yearning of Haydn’s dissonant and dramatic Symphony No. 44.

Jaman E. Dunn, conductor
What defines pops? Popular and light classical music, the tunes that make one want to dance, smile and feel alive. This concert explores works across the generations that have stood the test of time through film, television, commercials and more. Everyone should recognize “Can Can,” “In the Hall of the Mountain King” and “Hoedown,” plus “Over the Rainbow,” to name just a few.

Double-threat violin and piano phenom Ray Ushikubo returns to perform Beethoven’s youthful, imaginative, first full-length orchestral piece, contrasted by the subdued resignation of Richard Strauss’ sunset years and Metamorphosen, and the pulsating Spanish rhythms of Turina’s tone poem capturing the toreador’s prayers to succeed in the ring versus the audience’s blood-thirsty anticipation of the spectacle.

An evening of popular compositions from the jazz halls of the ’30s, ’40s and ’50s. The BPO shines the spotlight on BPO clarinetist and saxophonist Sal Andolina, with various selections made famous by leading man of jazz Charlie Parker, including tunes “Easy to Love,” “I’ve Got You Under My Skin,” “Just Friends” and “Moon Mist.”

All artists and repertoire are subject to change. Further details about all programs on the 2020-21 concert season can be found at bpo.org.

Single tickets and ticket packages for the “BPOnDemand” series are on sale now and can be purchased at bpo.org or by calling the box office at 716-885-5000. Patrons are encouraged to sign up for the BPO email list at bpo.org to receive the latest updates, or to call the box office with any questions. The box office is working remotely during this time, from 10 a.m. to 5 p.m. weekdays, and 9 a.m. to 1 p.m. Saturday.

Major corporate support for the BPO is provided by M&T Bank, BlueCross BlueShield of Western New York, Calspan, Elderwood and KeyBank. Government support is provided by Erie County, the New York State Council on the Arts, and the National Endowment for the Arts.

The Buffalo Philharmonic Orchestra Society Inc. provides a resident, professional, major symphony orchestra of artistic excellence and integrity to enrich the quality of life in Western New York through the presentation of live symphonic music and other musical events that educate and entertain the broadest possible audiences within and beyond the Western New York region. Since its founding in 1935, the BPO has served as Buffalo’s cultural ambassador. JoAnn Falletta is the Music Director of the Grammy Award-winning orchestra, which presents more than 120 classics, pops, rock, kids and youth concerts each year for over 200,000 people. For more information, visit bpo.org.