Elizabeth Otto, a University at Buffalo professor of art history and gender studies, has won the Northeast Popular & American Culture Association’s 2020 Peter C. Rollins Book Prize, awarded annually for innovative scholarship in the fields of American and popular culture by a writer living or working in New York or New England.

Otto’s eye-opening history, “Haunted Bauhaus: Occult Spirituality, Gender Fluidity, Queer Identities, and Radical Politics,” is a thoroughly detailed reexamination of the Bauhaus, the German art and design school whose brief history generated the creative momentum behind many of the 20th century’s most influential art movements.

“I was opening up a Zoom meeting when the award announcement arrived in an email,” Otto says. “The news was registering in my brain and I almost started shouting, ‘My book just won a prize!’ My colleagues in the department of global gender and sexuality studies are really lovely and supportive, so everyone was really happy with me.

“During what is often a time of isolation, it was kind of perfect.” 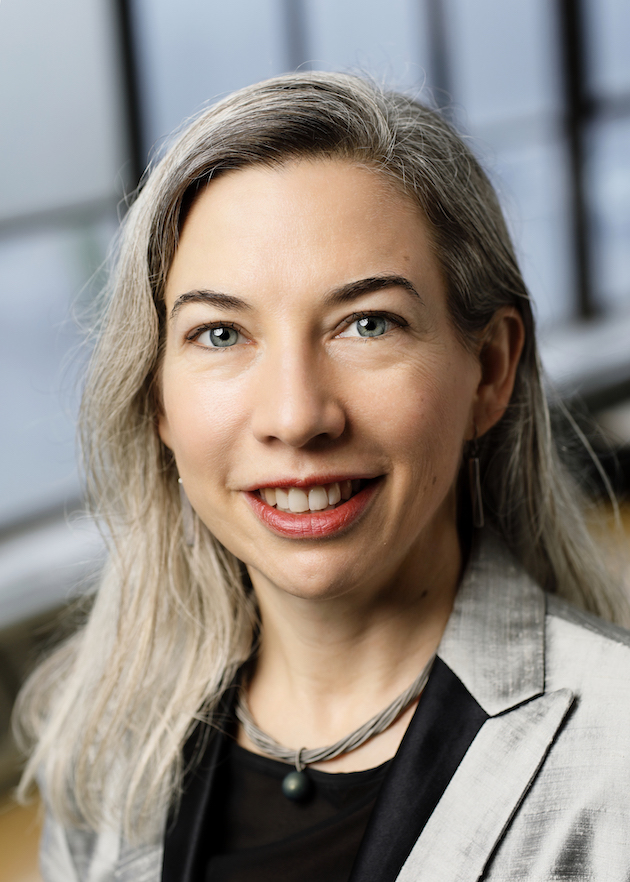 Elizabeth Otto (Photo courtesy of the University at Buffalo)

In “Haunted Bauhaus,” Otto uncovers the broad panoramic history of the Bauhaus to reveal a movement more diverse and paradoxical than previously assumed.

Otto says the award is particularly exciting, since it is for a book in the scholarly field of popular culture.

“Throughout ‘Haunted Bauhaus,’ I sought to show how this art movement was bound up with pressing issues of its own time, that it was more of a movement to reform daily life that drew ideas from its surrounding cultural context than many knew,” she says. “At the same time, I emphasize how many of the ideas being hashed out at the Bauhaus – on spirituality, gender, sex and politics – are close to ideas we are still grappling with.”

Praise for “Haunted Bauhaus” has been global, appearing in publications from Artforum to Germany’s Frankfurter Zeitung; Otto has also received invitations to speak in the U.K., Germany, Austria, Hong Kong and Korea.

“I’ve been pleased to see how many people of all ages want to learn about history, the meaning of experimental art of the past, and issues of gender, sexuality and spirituality,” she says. “This is great, especially after decades where there has been a trend to push students to choose majors in STEM and fields with more obvious practical applications than the humanities – even though, of course, humanities majors have extremely wide applicability, since we build the thinkers of tomorrow.”

“It’s exciting to talk with students and audience members about the power of art to spark new ideas and to shine a light in dark times,” Otto adds.

“Haunted Bauhaus” has its own history that stretches over the many years in which Otto spent research and writing the book.

“There is a long list of people to thank, but I’m tremendously grateful to UB’s Humanities Institute, where I served as executive director (2013-19) and worked with so many fabulous humanists that made me a much more adventurous scholar,” Otto says. “There is no way this book would have happened without the support of the institutions that funded my research; the deans in the College of Arts and Sciences, Bruce Pitmann and Robin Schulze; and my colleagues and our graduate students from the visual studies Ph.D. program who were crucial to my thinking in this book, as were my students in seminars on the Bauhaus that I taught at UB.”

As it turns out, Otto’s work researching the history of the Bauhaus has led directly to the work currently underway on her next book project, tentatively titled “Bauhaus Under National Socialism.”

While histories of the Bauhaus movement after the Bauhaus school was shut down under the Nazis in 1933 focus almost exclusively on those Bauhaus members who left Germany, in fact the vast majority stayed, and many of them collaborated with the regime – willingly and unwillingly.

“Some of them were also victims of the Holocaust, and a lot were somewhere in the murky ground in between, getting by and trying to get on with life,” Otto says. “So in this new book, I look first at how Bauhaus approaches were crucial elements of design for daily life, household goods, and popular culture in Nazi Germany. Then I go on to investigate the movement’s relationship to the Holocaust, both through the designers who were murdered by the Nazi regime, and those who worked for that same regime in concentration camps.

“Examining this other history of the post-1933 Bauhaus movement within Germany allows us to see how, as with all art movements, aesthetic approaches have no inherent political orientation; they can serve both good and evil.”

Otto is also working toward telling stories of designers who perished and whose work was largely lost.

“That feels like a bit of justice,” she says.