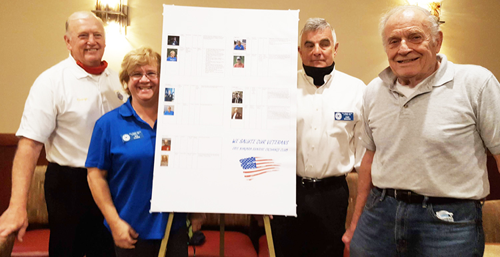 Attending veterans honored at the Nov. 11 Americanism program by the Erie Niagara Exchange Club include, from left, George Boller, Sue Clark, John Higgins and Paul Krause. Service members were honored with a plaque and special gifts.

The Erie Niagara Sunrise Exchange Club honored its members who served in the armed forces at a special Americanism program held on Veterans Day, Nov. 11.

“The program was a moving and unforgettable time to hear about our members who have served in the military and to honor each of them,” Ann Parelli said. “We asked each of the veterans to tell their stories of their proudest accomplishments or memories of that time. Our club is blessed to have these great members.”

Parelli, along with members Sue Gilbert and Phyllis Gentner, organized the event, which was held at the club’s breakfast meeting at the Olympic Restaurant in Kenmore. She said the club has 51 members, 10 of whom are veterans.

Members honored that day include:

•Robert Pecoraro, immediate past president of the club, who retired from the U.S. Air Force with the rank of colonel following 37 years of service. Pecoraro, currently alderman at large for the North Tonawanda City Council, served at Air Force bases in Central America and throughout the Middle East.

•Sue Clark, who served 30 years in the U.S. Air Force and National Guard and retired as master sergeant E-7, having served as an executive assistant in Europe and the Middle East.

•George Boller, who served 21 years in the U.S. Navy as a aviation officer and pilot, retiring with the rank of lieutenant commander. His service extended from Iran to Central America, having flown as a pilot on aircraft carriers.

•John Higgins, retired from the U.S. Air Force after 32 years with the rank of colonel. An airplane navigator, Higgins served in the Middle East, including Bosnia, Somali, Haiti and Iraq, with service on every continent except Australia.

•Paul Krause, who served in the National Guard and retired with the rank of sergeant E-5 after six years as a radio operator and tank commander.

•Jerry Maragliano, who served six years in the Naval Reserve retiring with the rank of petty officer. He served on a Naval supply ship during the Cuban missile crisis of 1962, arriving at Guantanamo Bay to evacuate dependents.

•Eugene Cramer, who served in the U.S. Army for two years, attaining the rank of corporal. His tour of duty included service during the Korean War.

•Bob Pagels, who served with the U.S. Army for six years in the artillery, retiring with the rank of sergeant. His tours of duty ranged across the United States.

•The late Robert Clark, who served in every branch of service for 40 years, starting with the Vietnam War and ending with the Iraq War, attaining the rank of chief master sergeant. Clark was a member of the Exchange Club, along with his wife, Sue, prior to his death.

•John Lukasik, also deceased, who served three years in the U.S. Army, attaining the rank of sergeant. Lukasik served in the South Pacific during World War II. He was active in the American Legion and founder of the Erie Niagara Sunrise Exchange Club.