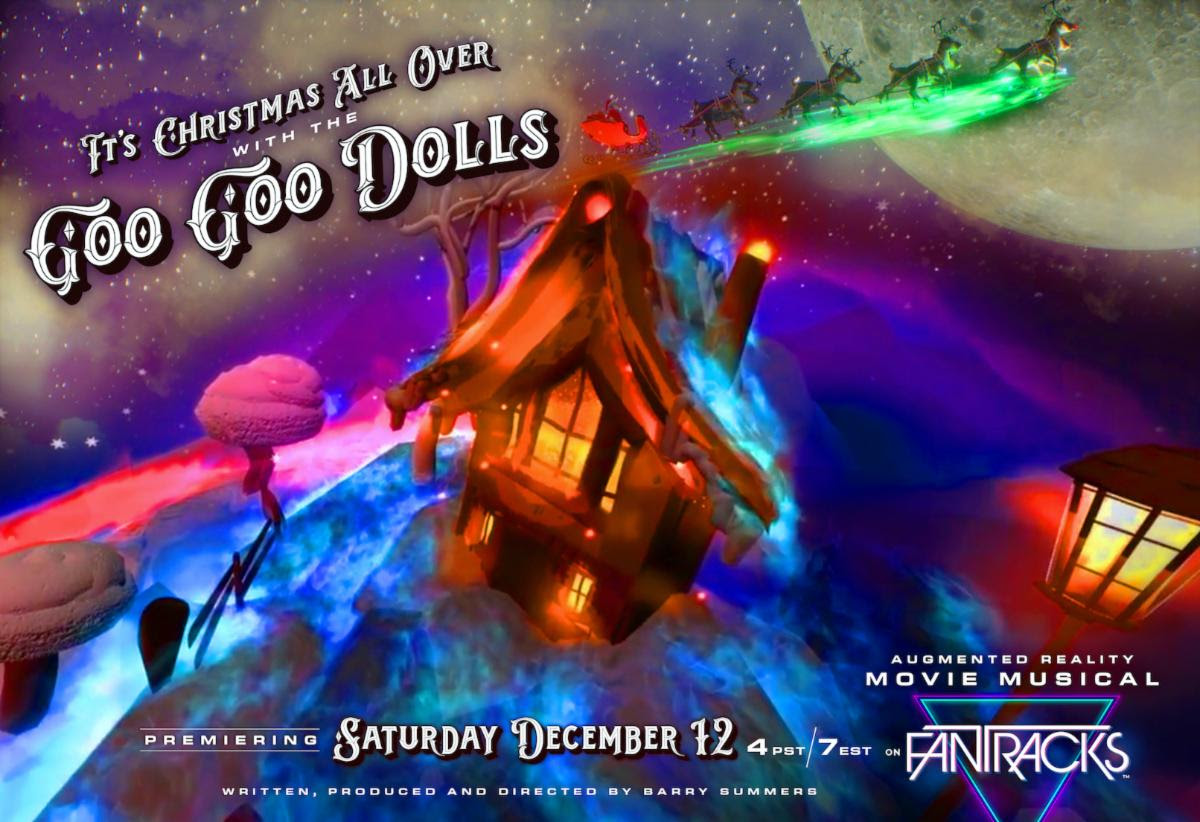 “It’s Christmas All Over” will feature Goo Goo Dolls performing music from their brand-new holiday album of the same name (Warner Records), but goes beyond the realm of a live concert to transport viewers through an unparalleled music journey, all taking place within a surreal virtual world. This movie also marks the second time the band has worked with FanTracks, the first being a livestream concert in October, which is currently available on-demand to subscribers on the FanTracks website.

Directed and produced by FanTracks President Barry Summers, the full hour-long program will first air as an exclusive sneak-peak for FanTracks subscribers only at 7 p.m. ET Friday, Dec. 11. The official global release, which will be free to all viewers, will happen at 7 p.m. Dec. 12, along with additional VIP private video meet-and-greets and a Q&A with the band. The program will remain available on-demand for free for 48 hours after the conclusion of the premiere.

"It was such an amazing experience getting to play songs from our new record live for the first time," GGD front man John Rzeznik said. "We can’t wait for everyone to see and hear these Christmas tunes in this unique way, and we hope they bring some cheer to this peculiar holiday season. Happy holidays from all of us to every single one of you!”

In this AR movie musical adventure, Goo Goo Dolls travel through past, present and future searching for the lost “Spirit of Christmas”; from wintery city street scenes, subways and taxis, to a 1940s speakeasy and the classic set of “The Ed Sullivan Show” (and beyond). As the band travels between settings, fans will follow along for an intimate and festive musical experience, unlike anything they’ve ever seen. Throughout, they treat fans to classic holiday standards as well as their new holiday music, and discover that, although people are separated by current events, they remain unified by the true nature of the holiday.

On the journey, the band takes a moment to remind everyone to "Give A Little Bit" – with two autographed guitars to be auctioned to benefit Music Gives to St Jude Kids – St. Jude Children’s Research Hospital.

Writer, director and producer Summers, co-founder and president of FanTracks Digital, said, “We built all these scenes from the live footage we captured of the Goo Goo Dolls along with special guest performers in October, and then using augmented reality, layered in the environments, animation and more to create something really special that the world has not seen before. The band’s performance is outstanding, and ‘It’s Christmas All Over’ is sure to become an instant holiday classic.”

Goo Goo Dolls’ album “It’s Christmas All Over” was created during lockdown earlier this year, and was produced by Rzeznik alongside the band’s frequent collaborators Brad Fernquist and Jimmy McGorman. Released Oct. 30 via Warner Records, it boasts a diverse collection of songs that capture the warmth and spirit of classic Christmas music. The record is packed with iconic tracks such as “Have Yourself A Merry Little Christmas,” “Let It Snow,” and the brand-new original “This Is Christmas,” all three of which currently rank in the top 40 at AC radio. “It’s Christmas All Over” is available via all digital streaming platforms here.