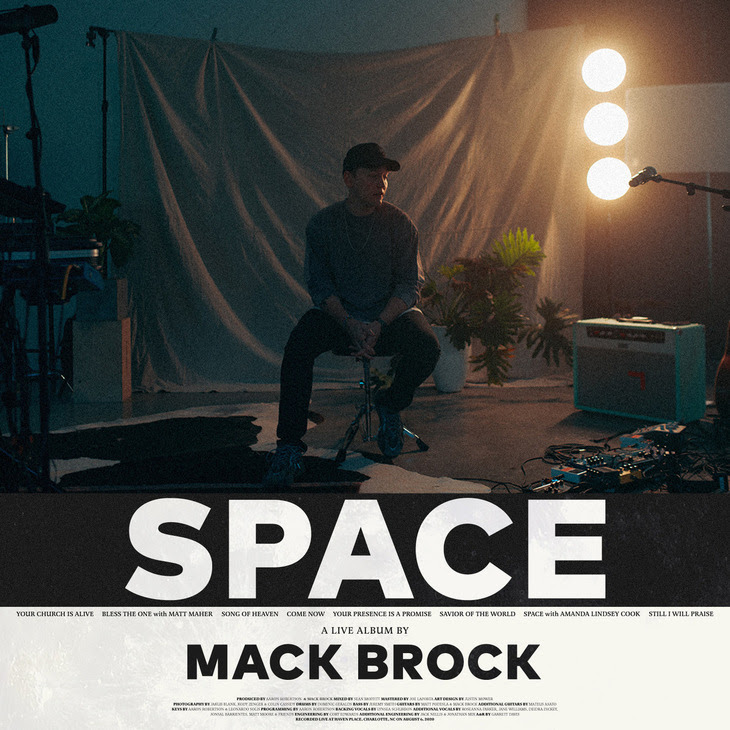 Capitol CMG worship artist/songwriter Mack Brock has released a new live album, “SPACE.” This special album was recorded this year at Brock's home base of Charlotte, North Carolina, surrounded by musicians, crew and family that have walked through life with he and his wife, Meredith.

A press release said, “ ‘SPACE’ is filled with songs that are reminders that Jesus always creates space for us – no matter our surroundings, past, season, faults or failures.”

"People are tired and oftentimes feel so left behind," Brock said. "My heart's desire is that myself, my family and my music can be a conduit that reminds people that they are loved and accepted just as they are with no strings attached. They can be confident in who they are. God loves you, and when you receive that, it’ll change your life. It allows you to love people in a new way – a love that serves, a love that leads with grace. I think this is where our desire to give our life to ministry as well as to become a foster family came from."

This holiday season, the Brock family looks a little different as members entered into the journey of being a foster family. They “opened their home to those that need care and extend God's love as he extends it to us.”

"One significant thing is that being a foster parent is such a picture of God's love for us," Brock said about fostering. "We come to God with nothing, and he loves us with no promise of receiving love in return. He provides for us and nurtures us, makes himself so vulnerable to rejection, and that's a lot like what fostering feels like."

The press release said, “After a year that has been challenging for most around the globe, this new album offers eight new songs that will help the listener to enter into a new intimacy with God. Brock captures in song the truth that we need to hear that God is with us.”

Brock’s greatest passion is to lead people into a heightened awareness of the presence of God and to see individuals experience the breakthrough God has for them through worship. He has been a worship leader for over 15 years and co-wrote “O Come To The Altar,” “Resurrecting,” “Here As In Heaven” and “Do It Again.” Each has had a significant impact on the church worldwide. Three of his songs have landed in the Top 50 on CCLI, and four in the Top 100 CCLI songs.  Brock served as the music producer and a key worship leader with Elevation Worship for a decade, and has led thousands in worship in arenas and auditoriums all across the U.S.

Mack is married with two children and lives in Charlotte.