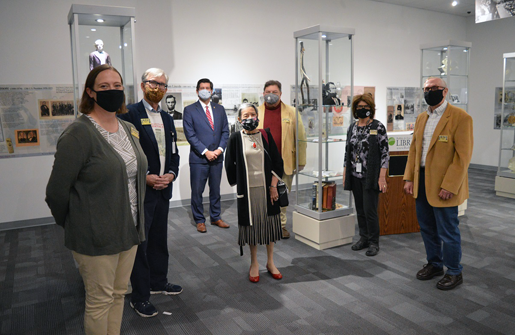 Erie County Executive Mark Poloncarz (third from left) joins members of the Buffalo Presidential Center's board of trustees at the center's opening on Monday at the Central Library in Downtown Buffalo. An extensive collection of more than 10,000 political artifacts is on display in a new, permanent home.

Buffalo’s rich and detailed presidential and political history is now on display at the Buffalo Presidential Center, which on Monday unveiled its new, permanent, 1,700-square-foot space at the Downtown Central Library in Buffalo. Until now, the center has operated without a permanent home space and has relied on the collaboration and generosity of other local and regional organizations for a place to gather audiences, share information, and display selections from an extensive collection of more than 10,000 political artifacts.

“Buffalo has long been a favorite place for our commanders-in-chief, both for political and personal reasons, and visitors to the Buffalo Presidential Center will enjoy discovering the special relationship that our city has had with so many of our presidents,” Erie County Executive Mark Poloncarz said. “Many people remember that two presidents came from Buffalo and one was sworn into office here, but fewer know that Buffalo’s connections to the presidency also include Shirley Chisholm, the first African-American to run for a major party’s presidential nomination; and Belva Lockwood, the first woman candidate for president. Learn more about our rich presidential history at the Buffalo Presidential Center.”

Poloncarz joined Linda Brigance, PhD., president of the Buffalo Presidential Center’s board of trustees, along with Buffalo & Erie County Public Library Director Mary Jean Jakubowski and other members of the center’s board to officially announce the opening.

The Buffalo Presidential Center was formed approximately 10 years ago by a small group of people led by attorney Maryann Saccomando Freeman and former Erie County Legislator Joan Bozer to encourage the study, exploration, interpretation and public awareness of Buffalo and Western New York’s historic and contemporary contributions to the U.S. presidency and national affairs. Since 2010, the center has presented 12-15 programs annually, including speakers’ series, panel discussions, historical reenactments and exhibitions.

In 2014, the need for a permanent space saw added urgency when an extensive collection of political artifacts was bequeathed to the center by the family of the late Elwin “Rich” Richardson of Kirkville. This collection includes thousands of campaign and memorabilia items ranging from official campaign products to rare examples of folk art. In October of 2018, the center moved into offices with storage space, but lacking exhibition space in the central branch of the Buffalo & Erie County Library, housing its collection all under one roof for the first time.

“With this new, permanent, 1,700-square-foot space to exhibit rotating selections of our over 10,000 items, we can reach more audiences with more information and stories about our region’s many connections to the U.S. presidency and the fascinating people who lived those connections,” said Linda C. Brigance, PhD., president of the board of trustees. “The focus began with not only our two resident presidents, Grover Cleveland and Millard Fillmore, but also included others who have a connection to the presidency but might be less well known, such as first lady Frances Folsom Cleveland; Robert H. Jackson, U.S. attorney and chief U.S. prosecutor at the Nuremberg trials; and Barber Conable, appointed by President Ronald Reagan as president of the World Bank Group.”

Brigance continued, “We are continuing to research and expand the people we will be featuring in the museum, including non-political Western New Yorkers such as James Benjamin Parker, the African American man who tackled President McKinley’s assassin, preventing him from firing addition shots; and, Angel Canedo, White House butler to presidents Ronald Reagan, George H.W. Bush, George W. Bush and Bill Clinton. Without the support and encouragement of County Executive Mark Poloncarz, the Erie County Legislature, the Buffalo & Erie County Library and our many community supporters, we would not be opening this facility this week.”

Artifacts and presidential political items of interest displayed at the Buffalo Presidential Center include:

•An illustrated timeline on the outside wall of the museum tracing the date and location of over 140 visits to Western New York by 36 presidents before, during and/or after their presidencies from William Henry Harrison (1813) to Donald Trump (2016). That’s 203 years of presidential visits!

•Objects relating to Lockwood’s campaign for president in 1884 and 1888 are exceedingly rare. Many of them are demeaning and insulting toward her and women who sought to have a role in public life. On display is a postcard that includes an illustration of Lockwood wearing a skirt that lifts up and under the skirt is an image of Benjamin F. Butler, an 1884 candidate for president on the Greenback and Anti-Monopolies parties. Both Lockwood and Butler lost to Grover Cleveland in 1884.

•Campaign button, ribbons, pamphlets and posters from Cleveland’s campaigns for mayor of Buffalo, governor of New York and president of the United States.

•Promotional items featuring the image of Folsom Cleveland, who was adored for her beauty and youth. One item with her image is an ironstone serving platter sent to stores in hopes it would be displayed to advertise Sparks Liver and Kidney Disease Cure. (Political figures of the time did not have to give permission for their likenesses to be used to sell products.)

•An assortment of items tracing the history of “Donkeys and Elephants: Enduring Political Icons” from cast iron doorstops from the 1908 presidential campaigns of William Howard Taft and William Jennings Bryan to 21st century products sold or given away to promote Republican and Democratic Party candidates.

“Buffalo is full of inspiration, because it has, next to Washington, D.C., the richest presidential history of any city,” said Brady Carlson, NPR host and author of “Dead Presidents: An American Adventure into the Strange Deaths and Surprising Afterlives of our Nation’s Leaders.”

George Cleveland, grandson of President Grover Cleveland, said, “The secrets to the future are wrapped up in history. The enthusiastic work of the Buffalo Presidential Center will be revealing those secrets for years to come. The history of Western New York is a gold mine and the BPC will be a mother lode!”