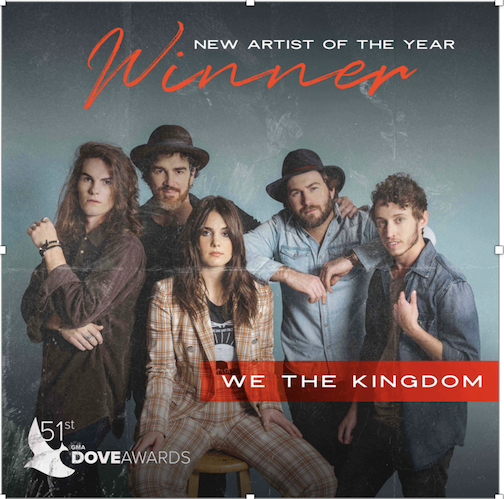 We The Kingdom (Image courtesy of The Media Collective)

Multigenerational family band We The Kingdom earned the prestigious title of New Artist of the Year at the 51st annual GMA Dove Awards. This marks the inaugural Dove Award win for the group, which performed its eight-week chart-topping hit, “Holy Water,” on the official Dove Awards broadcast, which aired Friday evening on Trinity Broadcasting Network (TBN).

“Our hearts are so full and grateful. Thank you so much to everyone who has listened to our music and supported us. The journey has been indescribable,” We The Kingdom shared following their win. “We’re thankful that God has been able to use the pain and everything we’ve walked through to get here to communicate his love to people. This wouldn’t have been possible without you and without our incredible team. Thank you so much. We love y’all! Let’s keep making music!”

In anticipation of the holiday season, on Friday, We The Kingdom released an original Christmas song, “Light of the World (Sing Hallelujah).” The song is available at all digital streaming platforms now.

We The Kingdom is a multigenerational family of musicians, including esteemed producers and songwriters Ed Cash (Chris Tomlin, NEEDTOBREATHE, Bethel Music, Crowder), Scott Cash, Franni Rae Cash, Martin Cash and Andrew Bergthold. The band organically formed at a Young Life camp in Georgia. Each of the five members had come to lead worship, but they themselves were weary and heartbroken due to a number of difficult circumstances. Late one night, as they spontaneously gathered to write a song for the campers, their collaboration caught fire, bringing with it personal healing and a fresh dream for the future.

As one of the top 20 breakout artists across all genres in 2020, the group’s first single, “Holy Water,” reigned at the top of the Christian radio charts for eight weeks, earning We The Kingdom four Dove nominations and a win for “New Artist of the Year.”