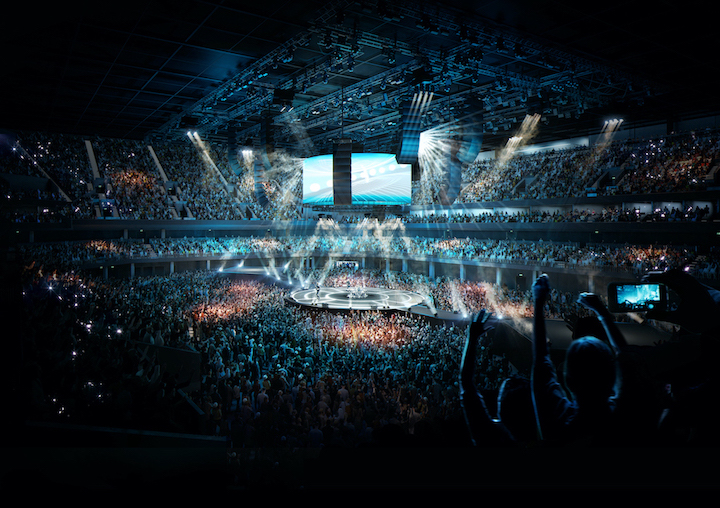 Multiaward-winning and multimillion-selling global artist and musician Harry Styles has made his first big move into the business world with an investment in Co-op Live, Oak View Group’s new venue in Manchester. The arena, which will be the U.K.’s largest, was given planning approval in September and is set to open in 2023.

Styles continues to enjoy monumental success with his music career following the release of his 2019 album “Fine Line.” A press release said, “It is a huge coup for OVG to have him on board and investing in their arena while at the peak of his artistic career. The investment in Co-op Live also closes a particular loop for Harry, whose first job was delivering newspapers for a Co-op store as a teenager.”

The singer-songwriter will take more than just a capital interest, he will also be actively involved in the development of the project in his hometown of Manchester. Styles will work alongside OVG’s U.K. and international team, led by global live entertainment industry leader Tim Leiweke, on delivering world-leading experiences at Co-op Live, with a particular focus on fans, unique premium and hospitality areas, and artist spaces.

Co-op Live will be purpose-built for music, with an interior bowl that elevates both the artist and fan experience. Co-op Live is also the first arena to be built with an equal focus on artists and fans by offering the best experiences and sound. From the largest standing floor capacity in the U.K. to a range of premium tickets, the arena will be designed to provide fair financial opportunities for artists while offering fans access to tickets at a wide, and accessible, range of prices.

Styles said, “I’m incredibly proud and excited to be partnering with OVG on their plans for Co-op Live. Manchester is an incredible city, filled with incredible people, and I couldn’t be happier being involved in this project. It very much feels like coming home.

“I was drawn to this project on every level, from the opportunities it brings to the contribution it will make to the city, and most importantly, that it will allow even more live music to thrive in Manchester. It's just another sign that this amazing city continues to grow.”

Francesca Bodie, OVG’s president of business development, said, “At OVG, our vision is driven by a unique view that puts fans and artists first in every decision we make. There’s no artist in the world right now better placed than Harry to advise us on delivering a first-class experience for visitors and artists at Co-op Live.

“We’re focused on building one of the world’s best arenas in Manchester and Harry’s advice and consultation is going to be invaluable as we work to deliver that.”

Co-op Live represents a roughly $450 million private investment in Manchester and will generate 3,500 jobs during construction, providing a much-needed boost to the city’s economy. It will support a further 1,000 jobs during operation and bring more events to the city. The arena will be located on the Etihad Campus and has been designed as the most sustainable arena in Europe. The partnership with Co-op will see the venue generate at least $1 million annually for good causes both locally in Manchester and across the U.K.

Visit www.cooplive.com for more information on the project.

Styles’ sophomore solo effort, “Fine Line,” continues his utterly unique first decade in music. At just 26, his sophisticated, romantic rock record earned critical acclaim and huge commercial success. “Fine Line” debuted at No. 1 in over 20 countries, including the U.S., where it debuted No. 1 on the Billboard 200 with over 478,000 equivalent album units sold. It made history as the biggest sales week for a solo U.K. male artist’s album since Nielsen Music began electronically tracking sales data. “Fine Line” has been RIAA Platinum-certified and includes Styles’ back-to-back, two-times Platinum No. 1 pop radio hits “Adore You” and “Watermelon Sugar,” which peaked at No. 1 on the Billboard Hot 100 – marking Styles’ first No. 1 song on the chart. He was nominated for Best Male and Mastercard Album of the Year at the 2020 BRIT AWARDS.

Styles became an overnight sensation with the band One Direction, which conquered the world of music, touring and scoring hits at a frantic pace, while he began to evolve as a songwriter and performer. Styles went his own way in spring 2017 when he dropped his first solo single: the double-Platinum piano epic “Sign of the Times.”

His self-titled debut album, released in May 2017, entered the Billboard 200 at No. 1 and topped charts at No. 1 in over 55 countries. The 10-track album confirmed Styles as an artist schooled in the classics, while still breaking new ground. He toured the album in 2017 and 2018 with 90 sold-out shows in more than 20 countries. Styles made his acting debut in Christopher Nolan’s Oscar-nominated film “Dunkirk” in July 2017, becoming the first British artist with a No. 1 debut single, album and film in the same year.

Oak View Group (OVG) is a global sports and entertainment company founded by Leiweke and Irving Azoff in 2015. OVG is focused on being a positive disruption to business as usual in the sports and live entertainment industry and currently has eight divisions across global offices (Los Angeles, New York, Seattle, Philadelphia and London).