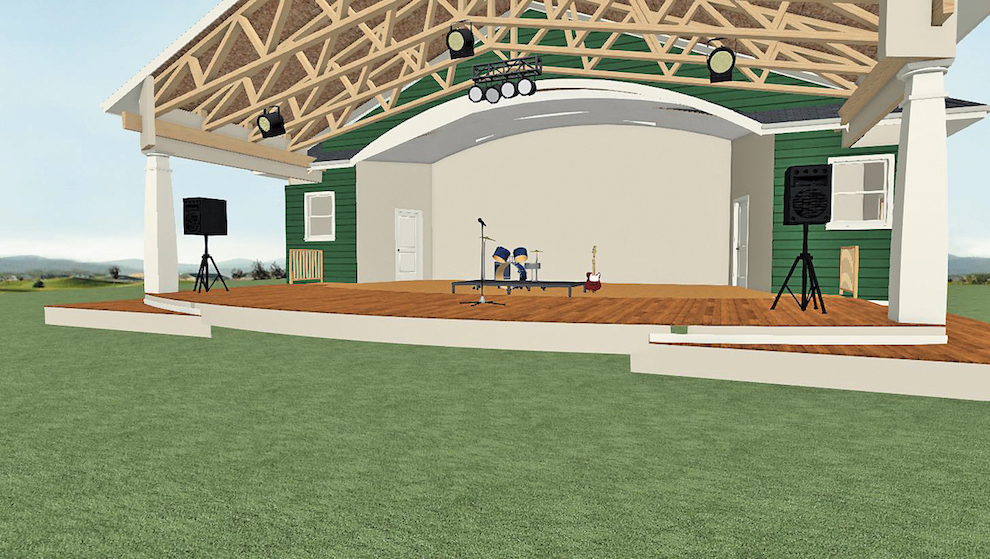 Bandshell rendering by Giusiana Architects, courtesy of the Village of Lewiston.

The Village of Lewiston Board of Trustees approved a plan to move the Academy Park bandshell, and expand the structure’s capabilities, at its monthly meeting Monday night.

The bandshell will move from its current spot in the northwest park corner (across from the Hibbard’s plaza) to the southwest side adjacent to Syros Restaurant and Warren’s Village Hardware. It will face the field.

Architect David Giusiana pitched the idea of a new overhang with trusses, as well as a larger stage, while noting the bandshell will be ground level.

“I like it myself,” Deputy Mayor Vic Eydt said. “I think it looks great.”

Lewiston Tops owner Anthony DiMino had the structure built almost 20 years ago. He has agreed to cover the cost of its relocation, as well.

Speaking Tuesday, DiMino said he expects the bandshell to be moved in the winter.

“I talked to my architect and my construction manager this morning. … We’re going to try to do some things now. But, to be honest, we’re probably not going to move the bandshell until the middle of the winter, because it’s really too late now,” DiMino said. “We have to pour footers and do some things ahead of time. And by the time we’re done with that, we’re going to be in November – and it’s going to be so mushy that we won’t be able to do that.

“So, we’re thinking about at least pouring the footers and stuff that we need to put the new bandshell on. And then move the bandshell hopefully sometime in the wintertime when we don’t have to worry about pouring the footer. The ground should be hard as a rock. We’ll move the bandshell then. And then complete construction during the spring, when it’s advantageous; and then hopefully be done by – if COVID doesn’t screw everything up – we figure that we’ll be ready to go by, hopefully, Easter.”

The bandshell is most notably used by the Kiwanis Club of Lewiston, in conjunction with the Niagara County Peach Festival. Kiwanians build a stage extension for concerts, dance routines, competitions and pageants.

DiMino said permanently enlarging the stage would open the door to additional opportunities.

He noted, “It was something I wanted to do for a long while, because my original plan – almost 20 years ago – was to get the stage big enough for the Buffalo Philharmonic,” he said. “It never was big enough for that type of venue. It should be now.”

Speaking to the HPC, Welch said moving the bandshell “is at great expense to Anthony DiMino. It’s going to cost him quite a bit to do that for us. We appreciate his willingness to do this.”

DiMino explained, “The problem with the bandshell is like saying Academy Park is just a park. We call it Academy Park. That bandshell was dedicated as the Alphonso DiMino Memorial Bandshell. That’s what it should be called. Just like we call it Marilyn Toohey Park. When we refer to the bandshell, we should be referring to it as the Alphonso DiMino Memorial Bandshell.

“So, if I’m going to make sure that it’s still dedicated to my father, I felt that it was my responsibility to make sure it is the best possible bandshell in Western New York.”