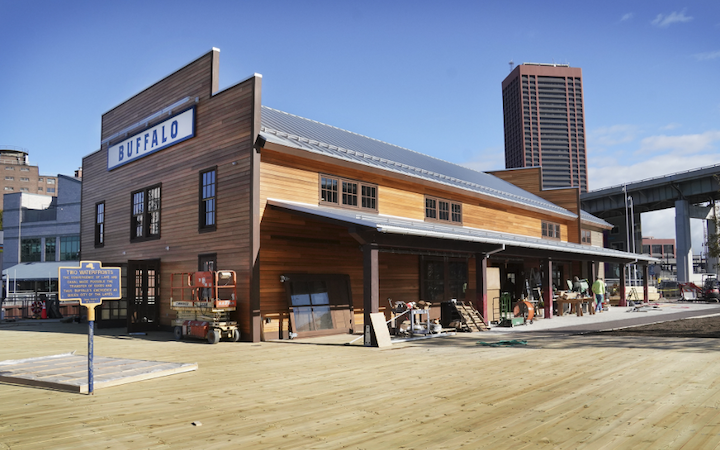 Gov. Andrew Cuomo on Thursday announced the completion of construction on the $5.1 million Longshed building on the northern end of the Central Wharf at Canalside in Buffalo. The two-story, gabled-roof wood structure reflects the Central Wharf site's history by incorporating elements from the Joy and Webster Storehouse located on the site in the early 1800s. The approximately 4,400-square-foot Longshed includes a main floor that stretches the length of the building, a smaller mezzanine level, public bathrooms, roll-up entry doors, and an exterior porch that overlooks the Canalside lawn.

"This exciting project is just the latest positive economic development to advance at Canalside," Cuomo said. "Western New Yorkers using Canalside as a retreat during these stressful times will appreciate a new attraction that adds to the overall transformation of the waterfront, while also celebrating the historic shipping industry that helped shape the Queen City."

The wood-frame building will initially be used by staff and volunteers from the Buffalo Maritime Center to construct a replica of the 1825 Seneca Chief packet boat, which transported Gov. DeWitt Clinton from Buffalo to New York City to mark the official opening of the Erie Canal. The packet boat project is expected to take about three years to complete. During that time, the public will be able to watch the boat being built and even volunteer to join the construction crew. Those wishing to volunteer can visit the Buffalo Maritime Center's website at https://buffalomaritimecenter.org/.

"Buffalo is experiencing a resurgence, but we are making an effort to preserve our history and tell our unique story with attractions like the Longshed," Lt. Gov. Kathy Hochul said. "The Erie Canal was instrumental in the growth of Buffalo and Western New York and continues to play a large role in its future as Canalside has become a year-round destination. We will continue to find ways to stimulate the local economy bringing tourists here as we build back better, smarter and stronger for the post-pandemic future."

ECHDC Chairman Robert Gioia said, "History is about to repeat itself at Canalside, with a building and a boat that are reminiscent of the ship building industry found at Buffalo's waterfront in the 1800s. The Longshed and packet boat building project will help history come alive for Canalside visitors who are excited to learn more about the significance of the Erie Canal and its terminus."

Once completed, the packet boat will be relocated to the commercial slip, where the Buffalo Maritime Center will make it available to tourists interested in learning more about the region's past. The boat will also tour other sections of the Erie Canal system to promote Buffalo and its history. The Maritime Center packet boat project is funded in part by $250,000 in state funds secured by Assemblyman Sean Ryan, $270,000 from the New York State Canal Corp., and a $50,000 grant from the New York State Council on the Arts.

Canal Corp. Director Brian U. Stratton said, "People who come to Canalside to visit the Longshed will not only learn about the history of Gov. Clinton's 1825 packet boat, but will also come away with an appreciation for the volunteers from the Buffalo Maritime Center who will work on this project in the coming years. Their passion and enthusiasm for this remarkable project shows no bounds."

Mara Manus, executive director of the NYS Council on the Arts, said, "NYSCA joins in the celebration of the Longshed Building and the launch of the Buffalo Maritime Center's packet boat project, for which we are proud to have provided significant funding through a partnership with the REDC. The real-time construction and ensuing launch of the boat will create a lasting bond with Buffalo and all who come from far and near to experience the magnificence of the canal. This groundbreaking project, along with the revitalization of Buffalo's waterfront, affirms the Erie Canal as one of the state's greatest stages to experience the arts." 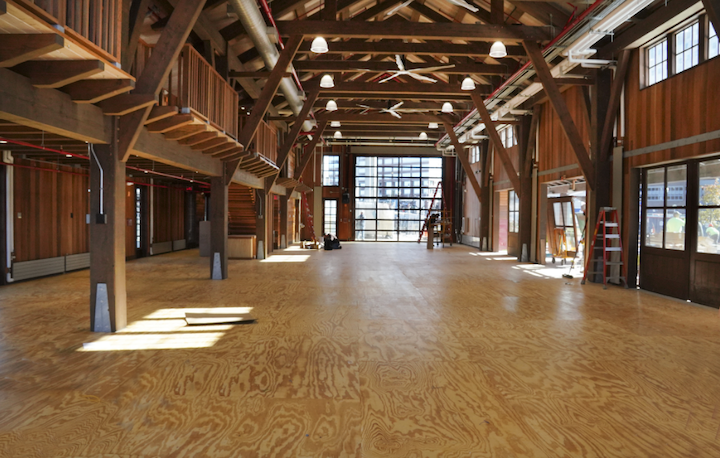 At the completion of the packet boat project, the Longshed will become a year-round hall that can be used as a flexible multipurpose space for educational and historical programming by cultural organizations or to host large public gatherings. The building will also be an important part of the 200th anniversary celebration of the Erie Canal's opening in 2025.

ECHDC purchased the Longshed property from the City of Buffalo for $150,000 and covered the cost of design and construction through a $5.6 million allocation from the New York Power Authority.

NYPA chairman and Buffalo resident John R. Koelmel said, "This restoration project is a great reflection of the Buffalo Maritime Center's dedication to upholding the great history of Buffalo and New York state. NYPA is proud to provide funding to support this project and be a strong leader in redeveloping the waterfront in Buffalo."

The state has committed more than $90 million to transform Buffalo's Inner Harbor into what is now known as Canalside, a mixed-use urban entertainment destination that has received national and international attention as one of the key drivers of the resurgence of Western New York. Open to the public since May 2008, Canalside features several fully restored facets of the original Erie Canal, including the commercial slip, boardwalk and the historic replica canals. A year-round attraction, Canalside boasts a wide array of family activities that capitalize on and showcase the diverse resources of the Western New York region. In addition, the historic replica canals are frozen in the winter months to become New York state's largest outdoor ice-skating rink. Another unique project, the Buffalo Heritage Carousel, is under construction and expected to begin operation next spring.

Congressman Brian Higgins said, "The Longshed embraces Buffalo's history and plans for our future, continuing our work to create a waterfront destination that is uniquely ours. This is the latest project made possible thanks to the 2006 New York Power Authority federal relicensing settlement, which has funded a great deal of Buffalo's waterfront development."

Ryan said, "The Longshed is one of several exciting new projects coming online at Canalside. Between the new Longshed, Explore and More Children's Museum, and the historic carousel project that is nearing completion we're really seeing the next generation of amenities at Canalside come to life. All of these projects will help to draw even more families to our rapidly developing waterfront and give them reasons to keep coming back. I'm thrilled to see more attractions come to Canalside and I'm excited to see what we will be able to work together as a community to develop next."

Buffalo Mayor Byron Brown said, "When the reimaging of Buffalo's inner harbor as Canalside first began one of the goals was to tie its future to the past, and the Longshed Building is a great example of that effort. My administration sold what was an historic, but idle parcel of city-owned land to the Erie Canal Harbor Development Corp., which has returned it to its roots as a ship building center. This is a great addition to the growing list of attractions on our world-class waterfront."

Erie County Executive Mark Poloncarz said, "Canalside continues to grow in popularity as people look for outdoor activities here in Erie County, and the addition of the Longshed building is sure to add to the attraction. Now visitors will be able to watch as shipbuilding returns to the waterfront and the replica Seneca Chief packet boat is constructed, opening a window into our history and providing an invaluable educational and tourist attraction."