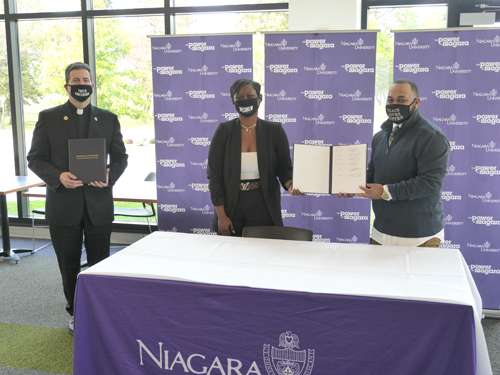 Niagara University has established a scholarship to assist BIPOC (Black or Indigenous person of color) students in their academic pursuits. The Fannie Lou Hamer Freedom Retention Scholarship, suggested by junior Lovell Lee and announced during a ceremony on Tuesday, will financially support students of color as they complete their degrees and establish and pursue their career goals.

The scholarship, the first of which will be awarded in fall 2021, was named for civil rights activist Fannie Lou Hamer. As cofounder and vice chair of the Freedom Democratic Party – which she represented at the 1964 Democratic National Convention – Hamer’s efforts were often met with violence by white supremacists and police. She remained undeterred, however, and continued to help and encourage thousands of African Americans in Mississippi to become registered voters, and to assist hundreds of disenfranchised people in her area through her work in programs such as the Freedom Farm Cooperative. She unsuccessfully ran for the U.S. Senate in 1964 and Mississippi State Senate in 1971.

“This scholarship will stand as a tribute to Fannie Lou Hamer’s commitment to advance civil and voting rights,” said the Rev. James J. Maher, C.M., Niagara University president. “It is a testament to her honorable work, as well as to the work of those who support the dismantling of racism in the United States. As we move forward as a community in our understanding of how systemic racism has affected BIPOC people, it is imperative that we address the issues of access and equity for BIPOC students. This scholarship is a step toward a more just and equitable campus community.”

Maher officially announced the formation of the identifying and dismantling racial injustice task force, on June 1, to address the continued social unrest after the murders of Ahmaud Arbery, Breonna Taylor, George Floyd and Elijah McClain, whose deaths touched on one of the many issues of systemic racism and oppression. Over the course of eight weeks, a press release noted, “the 11 members, representing faculty, staff, executive leadership and students, identified areas of growth for the university to address and crafted comprehensive recommendations to support the vision for a campus community that is antiracist and embodies inclusivity, respect, and value of the human person.”

One of the goals identified by the task force was to increase financial support for BIPOC students, specifically those who are not eligible for the Niagara University Opportunity Program and who are not athletes. This focus was suggested by Lee, whose personal story of pursing an education reflects those for whom the Fannie Lou Hamer Freedom Retention Scholarship intends to support.

When Lee, who is a triplet, initially enrolled in college, he chose one solely based on the amount of financial support he would receive so as not to burden his family. However, during the fall semester of his freshman year, Lee faced racism and oppression on his college campus.

When he transferred to Niagara for his spring semester, he faced a new challenge: how to pay for tuition and room and board. His academic and economic status made him ineligible for the programs that typically assist students in need of financial assistance, but because he was one of three siblings attending college simultaneously, he needed to find sources of aid to finance his education.

While Lee was able to find such opportunities, he became keenly aware others in his position may not have these options. These students will end up accepting their lesser choice of institutions, or not attending college at all. His desire to give these students a greater chance to attend, and graduate from, institutions of higher education, led him to recommend the establishment of the Fannie Lou Hamer Freedom Retention Scholarship.

“I am grateful for the work of Lovell Lee and the members of the identifying and dismantling racial injustice task force, and for their recommendations to help make the Niagara University community accessible and welcoming to all,” Maher said. “It is our hope that the Fannie Lou Hamer Freedom Retention Scholarship will open doors for BIPOC students to realize their dreams of a college education and to support their success in college and their pathways to career opportunities.”