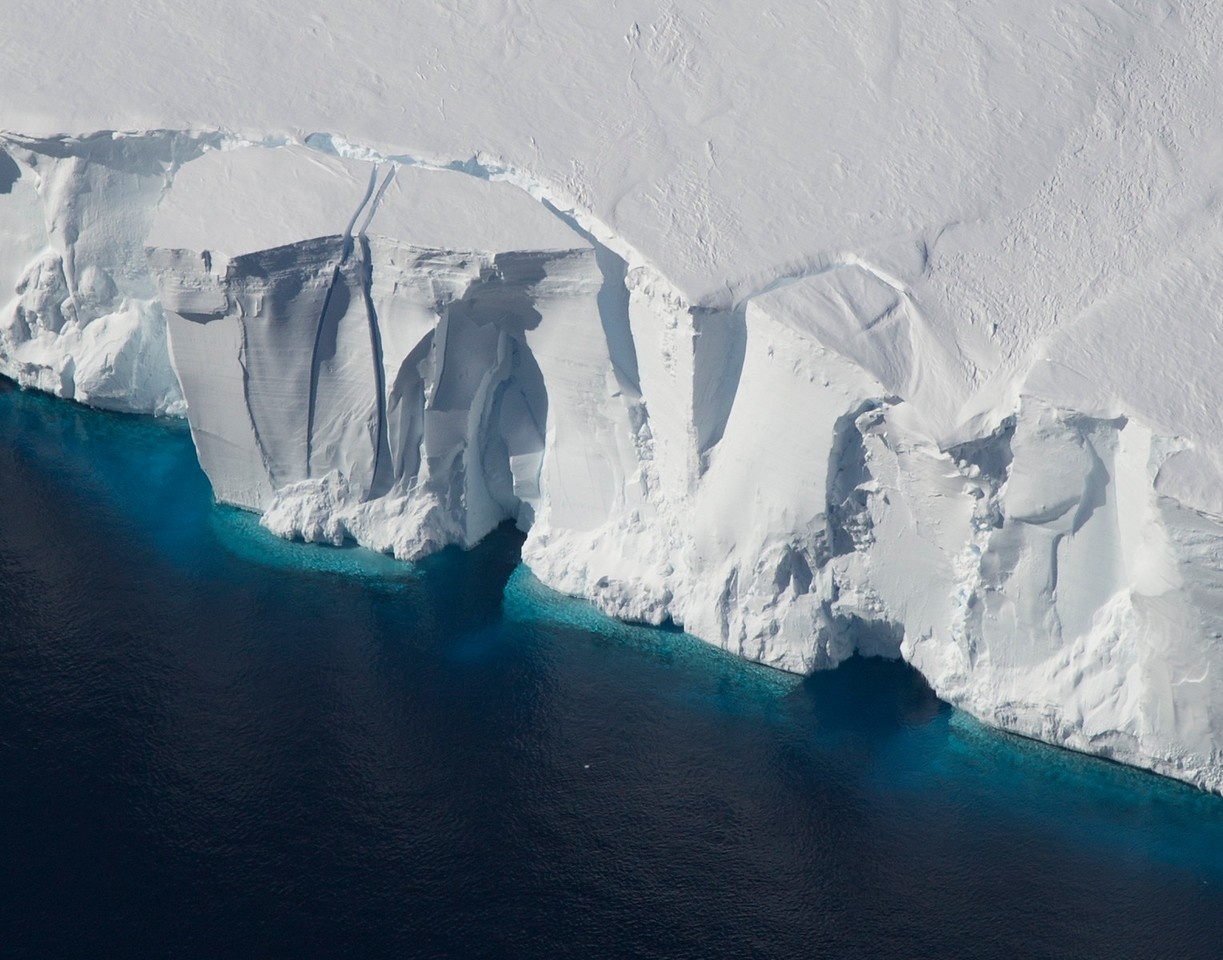 Ice shelves in Antarctica, such as the Getz Ice Shelf seen here, are sensitive to warming ocean temperatures. Ocean and atmospheric conditions are some of the drivers of ice sheet loss that scientists considered in a new study estimating additional global sea level rise by 2100. (Credit: Jeremy Harbeck / NASA; provided by the University at Buffalo)

An international effort that brought together more than 60 ice, ocean and atmosphere scientists from three-dozen international institutions has generated new estimates of how much of an impact Earth’s melting ice sheets could have on global sea levels by 2100.

The research, led by NASA and supported by the University at Buffalo’s supercomputing facilities, finds that if greenhouse gas emissions continue apace, Greenland and Antarctica’s ice sheets could together contribute more than 15 inches (38 centimeters) of global sea level rise – and that’s beyond the amount that has already been set in motion by Earth’s warming climate.

Findings from this effort are in line with projections in the Intergovernmental Panel on Climate Change’s (IPCC) 2019 special report on oceans and the cryosphere. Meltwater from ice sheets contribute about a third of the total global sea level rise. The IPCC report projected Greenland would contribute 3.1 to 10.6 inches (8 to 27 cm) to global sea level rise between 2000-2100 and Antarctica could contribute 1.2 to 11 inches (3 to 28 cm).

These new results, published this week in a special issue of the journal The Cryosphere, come from the Ice Sheet Model Intercomparison Project (ISMIP6) led by NASA’s Goddard Space Flight Center in Greenbelt, Maryland. The study is one of many efforts scientists are involved in to project the impact of a warming climate on melting ice sheets, understand its causes and track sea level rise.

“One of the biggest uncertainties when it comes to how much sea level will rise in the future is how much the ice sheets will contribute. And how much the ice sheets contribute is really dependent on what the climate will do,” said project leader and ice scientist Sophie Nowicki, Ph.D., formerly at NASA Goddard, who joined the University at Buffalo this semester as Empire Innovation Professor in the department of geology in the UB College of Arts and Sciences, and in the UB RENEW Institute.

“The strength of ISMIP6 was to bring together most of the ice sheet modeling groups around the world, and then connect with other communities of ocean and atmospheric modelers as well, to better understand what could happen to the ice sheets,” said Heiko Goelzer, Ph.D., a scientist from Utrecht University in the Netherlands, now at NORCE Norwegian Research Centre in Norway. Goelzer led the Greenland ice sheet ISMIP6 effort.

UB helped to facilitate the research by enabling the team to transfer, store and process huge amounts of data at the university’s Center for Computational Research (CCR) as part of a pilot project to leverage the facility’s capabilities to support ice sheet research. The UB effort is led by Jason Briner, Ph.D., UB professor of geology; Jeanette Sperhac, scientific programmer at CCR; Beata Csatho, Ph.D., professor of geology; Kristin Poinar, Ph.D., assistant professor of geology; Nowicki; and Abani Patra, Ph.D., a former UB faculty member who is now at Tufts University, where he is the Stern Family Professor of Computer Science and Mathematics and director of the Data Intensive Studies Center.

With warming air temperatures melting the surface of the ice sheet, and warming ocean temperatures causing ocean-terminating glaciers to retreat, Greenland’s ice sheet is a significant contributor to sea level rise. The ISMIP6 team investigated two different scenarios the IPCC has set for future climate to predict sea level rise between 2015 and 2100: one with carbon emissions increasing rapidly and another with lower emissions.

In the high emissions scenario, they found the Greenland ice sheet would lead to an additional global sea level rise of about 3.5 inches (9 cm) by 2100. In the lower emissions scenario, the loss from the ice sheet would raise global sea level by about 1.3 inches (3 cm). This is beyond what is already destined to be lost from the ice sheet due to warming temperatures between preindustrial times and now; previous studies have estimated contribution to global sea level rise by 2100 to be about a quarter-inch (6 millimeters) for the Greenland ice sheet.

The results point to a greater range of possibilities, from ice sheet change that decreases sea level by 3.1 inches (7.8 cm), to increasing it by 12 inches (30 cm) by 2100, with different climate scenarios and climate model inputs. The regional projections show the greatest loss in West Antarctica, responsible for up to 7.1 inches (18 cm) of sea level rise by 2100 in the warmest conditions, according to the research.

“The Amundsen Sea region in West Antarctica and Wilkes Land in East Antarctica are the two regions most sensitive to warming ocean temperatures and changing currents, and will continue to lose large amounts of ice,” said Hélène Seroussi, Ph.D., an ice scientist at NASA’s Jet Propulsion Laboratory in Southern California who led the Antarctic ice sheet modeling in the ISMIP6 effort. “With these new results, we can focus our efforts in the correct direction and know what needs to be worked on to continue improving the projections.”

Different groups within the ISMIP6 community are working on various aspects of the ice sheet modeling effort. All are designed to better understand why the ice sheets are changing and to improve estimates of how much ice sheets will contribute to sea level rise.

“It took over six years of workshops and teleconferences with scientists from around the world working on ice sheet, atmosphere and ocean modeling to build a community that was able to ultimately improve our sea level rise projections,” Nowicki said. “The reason it worked is because the polar community is small, and we’re all very keen on getting this problem of future sea level right. We need to know these numbers.”

The new results will help inform the sixth IPCC report scheduled for release in 2022.