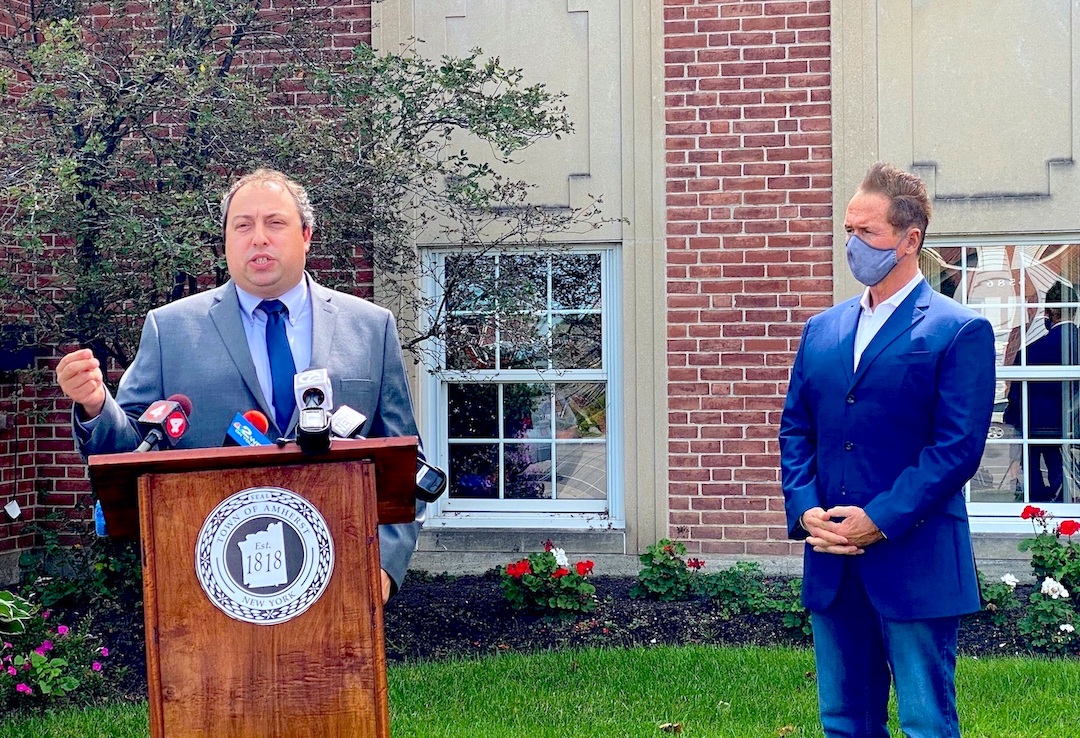 “In a time of a national emergency, we depend on the president to marshal the resources of the federal government to ensure the states and local municipalities have the assistance they need to respond on the ground,” Higgins said. “This virus is a national problem that needs a national solution. The cost of inaction is dire: homelessness, layoffs and hunger.”

Kulpa said, “The Town of Amherst faces close to a $14 million revenue shortfall. We have already taken drastic measures to cut our expenses and drop our deficit to $7 million, but such drastic cuts mid-year are near impossible. We are running out of options, and the town will be forced into harder decisions at year’s end and into 2021, 2022 and 2023. In order to curb the negative impacts of COVID-19 on municipal fiscal years to come, the federal government must step forward and take action. Municipal infrastructure work is key to driving the U.S. economy forward, and many municipalities will be forced to cut infrastructure projects because of the current year’s deficit.”

Higgins camp said, “In May, the House approved the Heroes Act, which would provide necessary relief to workers, families, small businesses and communities. However, nearly 120 days later, the Senate has yet to pass the Heroes Act or any other legislation that addresses the needs of local communities.”

The Heroes Act includes $500 billion for states and $375 billion in direct aid to local governments (estimates on funding provided to WNY governments). Under the bill, the Town of Amherst would receive over $29 million in 2020 and an additional $14.9 million in 2021 in direct assistance. The Village of Williamsville would also receive over $1.7 million this year and more than $861,000 next year. In addition, town residents and workers would benefit from approximately $893,000 in direct Community Development Block Grant relief as well as additional funding for schools, public safety, nutrition programs, a “Heroes Fund” for essential workers, and a new round of economic impact payments for residents.

Jason Furman, who served as chairman of the Council of Economic Advisers from August 2013 to January 2017, and currently works as an economic policy professor at Harvard’s Kennedy School of Government, recently noted investments in state and local governments makes good economic sense. He said, “For every dollar we spend on state and local assistance, it adds probably $1.70 to the size of the overall economy. There’s nothing that economists have studied better and more carefully when it comes to fiscal policy multipliers, probably, than state and local assistance.”

Six months into the pandemic, unemployment levels are quadruple pre-pandemic levels. Tens of millions of Americans are still out of work. Without relief, municipalities with budgets already stretched thin will face laying off workers, cutting essential services or raising tax revenues in the midst of the current economic crisis.

The Coronavirus Aid, Relief, and Economic Security (CARES) Act, approved by the House on March 27 and signed into law provided urgent relief for small business, the unemployed and families, through direct payments. In a June report by Moody’s Analytics, chief economist Mark Zandi pointed out how critical the CARES Act funding was to economic stability.

He wrote, “If this support had not been provided, the unemployment rate would have been almost 2 percentage points higher in the current quarter and over 4 percentage points higher in the third quarter However, the economic benefit fades fast, as much of the support gets into the economy quickly and will be largely delivered by August. Consistent with this is that nearly $1.7 trillion of the $2.8 trillion appropriated fiscal support was disbursed by early June.”

The Moody’s report, titled “Heroes Act to the Rescue,” calls the Heroes Act a “good benchmark for the additional fiscal support the economy requires for navigating through the pandemic without backsliding.”