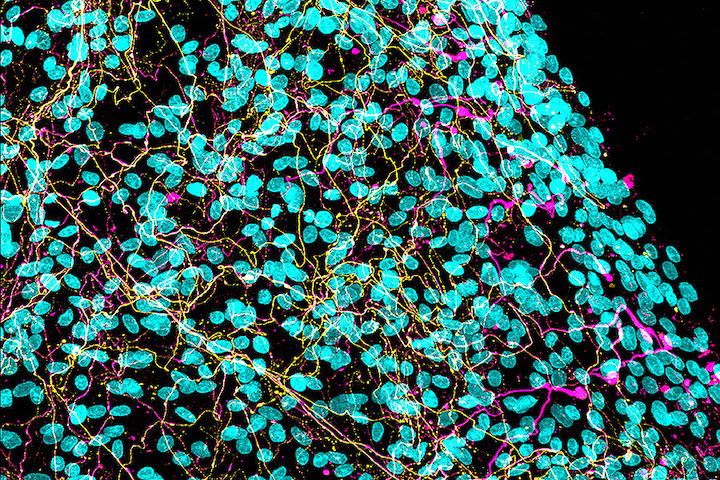 This image shows axons in vitro 24 hours after injury. The presence of Schwann cells (nuclei in cyan) helped maintain the integrity of axons (in magenta and yellow). (Image credit: Elisabetta Babetto, HJKRI)

Axons are long, finger-like projections of neurons that transmit critical signals throughout the nervous system. But because they are fragile, they are often among the first casualties of certain neurodegenerative diseases, causing symptoms such as muscle weakness or numbness of limbs.

New research from the University at Buffalo reveals that, despite the fragility of axons, the cellular envelope (Schwann cells) that encases them can come to their rescue when it senses that axons have been harmed.

Published in Nature Neuroscience last week, the paper reveals for the first time that Schwann cells, which surround axons within nerves like a glove covers a hand, can come to the assistance of injured axons.

“When axons are damaged early by neurodegenerative diseases, the neuronal network is disrupted, leading to debilitating symptoms,” said Bogdan Beirowski, M.D., Ph.D., assistant professor of biochemistry in the Jacobs School of Medicine and Biomedical Sciences at UB and a principal investigator at the Hunter James Kelly Research Institute (HJKRI) at UB.

He explained therapies to specifically protect axons are just beginning to be developed, and they focus exclusively on neurons, thereby neglecting Schwann cells.

The UB findings were described by one reviewer of the study as a major breakthrough in Schwann cell biology.

“We have discovered a new metabolic function of Schwann cells,” Beirowski said. “This is a paradigm shift away from the neuron-focused mechanisms of axon protection.”

“We have discovered that, when axons are stressed, they develop an increased appetite for sugars produced by Schwann cells, which can help the axons recover,” he explained. “Because axon demise is a hallmark of many degenerative conditions, our study paves the way for exploiting this endogenous mechanism to develop novel therapeutic approaches that are focused on the glia, the supportive, non-neuronal cells of the nervous system to stabilize axons in disease.”

“Our discovery is universally applicable to different neurodegenerative conditions affecting axons in the peripheral nervous system,” Beirowski explained. In particular, he said the findings should be of special interest to neuroscientists working on amyotrophic lateral sclerosis (ALS, or Lou Gehrig’s disease) and peripheral neuropathies.

The researchers discovered Schwann cells “sense” when axons become sick, and in response, provide them with increasing amounts of sugar products as an energy source to promote axon stability.

At the molecular level, the nerve injury causes a dramatic upregulation of glycolysis in Schwann cells, the metabolic process where glucose is broken down to form two molecules of pyruvate, a simpler sugar. That, together with the upregulation of specialized sugar transporters in the cell membrane, promotes the release of sugars from Schwann cells that support the sick axons.

“It’s as if the Schwann cells become a kind of energetic support system for injured axons,” Beirowski said.

By pharmacologically and genetically manipulating this metabolic pathway, the researchers were able to protect axons that had been injured in different ways in mice.

The researchers said that, while axons and Schwann cells form an inextricable relationship, they are generally studied separately by neurobiologists.

“In this study, we bring axons and Schwann cells together to study their metabolic interactions for the first time in the context of axon injury,” said Elisabetta Babetto, Ph.D., lead author, research assistant professor of pharmacology and toxicology in the Jacobs School and an investigator at the HJKRI.

Beirowski added that the research could lead to further investigations into similar relationships between axons and the glial cell counterparts of the central nervous system, called oligodendrocytes and astrocytes.

“What’s especially intriguing about these findings is that we show for the first time a physiological transcellular mechanism that has a soothing and reparative effect for injured axons,” Babetto said.

The researchers said in the future it could be possible to develop a treatment that would strengthen axons by manipulating glycolytic metabolism in nerves. The research may also lead to a preventive treatment that could reduce axon damage in scenarios where axons are especially vulnerable, such as in chemotherapy induced peripheral neuropathy.

The UB research could also lead to insights into why neuropathy occurs so often in diabetes.

“Because a nutrient and energy sensor is involved in the molecular mechanism that regulates glycolysis, our findings may also improve our understanding as to how diet, exercise and other environmental factors impact axon integrity in the peripheral nervous system,” Beirowski said.

The work was funded by two grants from the Muscular Dystrophy Association awarded to Beirowski and Babetto.

HJKRI is named for the son of former Buffalo Bills quarterback Jim Kelly. Hunter Kelly died at age 8 in 2005 from complications of Krabbe disease.