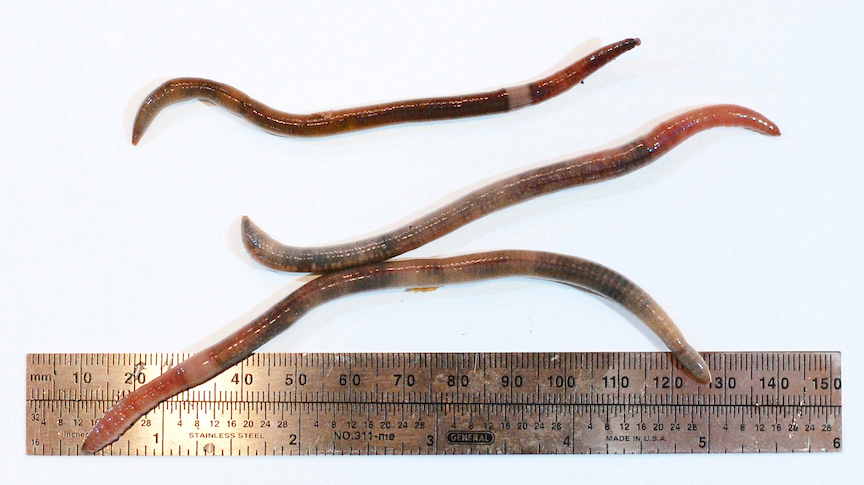 Earthworm scientist Nick Henshue had not spotted invasive “jumping” earthworms in the Buffalo area until 2019.

Now, these iridescent crawlers have appeared in different parts of Erie County in Western New York, posing a danger to local ecosystems, he says. The earthworms – belonging to the genera Amynthas or Metaphire – dwell in the top few inches of soil, jolt and thrash under threat, and can grow to about the length of a pencil. They also gobble up fallen leaves that play a vital role in forest ecosystems.

Henshue suspects that, in Western New York, they may have been transported to multiple locations in part via contaminated mulch.

“I had not seen any Amynthas in Western New York until last summer. The first ones I saw here were given to me in a yogurt container by a gardener with one of the local park systems. They said, ‘Hey, is this what we think it is?’ And sure enough, it was,” says Henshue, Ph.D., clinical assistant professor in the department of environment and sustainability in the University at Buffalo College of Arts and Sciences. “Friends in the local landscaping business were seeing them around 2018.

“And now, within a short time, I’ve been notified of sightings in different parts of the area. I have only seen them on campus in our forest, but others have brought them to me or sent pictures. They have been down South for a number of years, but were really only noticed widely in places like New England in the past 15-20 years.”

Henshue is an expert on earthworms (an oligochaetologist) and on soil ecology. A former high school science teacher, he has presented on invasive earthworms in the U.S., and did his Ph.D. research on what earthworms do in contaminated soil characteristic of post-industrial and brownfield sites.

Earthworms in general are relatively new arrivals to areas such as New England, New York and the northern Midwest, which were covered by glaciers until about 10,000 years ago. Amynthas and Metaphire, originally from Asia, pose a particular threat to northern forests that sprang up after the ice receded, Henshue says.

“There are 30 earthworm species just in New York, each with different life histories,” he says. “Some are deep-burrowing. Some live in the soil in the root zone. Amynthas are epi-endogeic – they are surface-dwelling earthworms that live in the top inch or two of soil and in the leaf litter.

“In agricultural systems, earthworms can be great, but in forests in our area, these jumping worms reduce leaf litter, which is really a protective layer that we rely on to protect and hide seeds and keep the sun off newly germinating plants. The ability of earthworms, writ large, to reduce that leaf litter, to mix up different soil horizons, to add a whole lot of bacteria to the soil – it’s very disruptive to plants, to animals and to organisms that live in the soil.”

Cocoons ‘Smaller Than the Backing of an Earring’

Henshue says “jumping” earthworms have already been spotted in Ontario, Canada, and that “it will just be a matter of time” before the critters become more numerous there.

He adds that human activity greatly aids the spread of invasive earthworms, including Amynthas and Metaphire, which can displace other earthworm species.

“We shouldn’t have earthworms at all in New York state, native or otherwise, because the glaciers pushed them so far south during the ice age,” he says. “But we do because of boats, bait, potted plants, soil being moved. Earthworm egg cases are tiny. They’re smaller than the backing of an earring. They get transported around really easily.

“People go to these pristine areas on fishing trips, and we see this as an invasion front. They dump their bait overboard because they think it will kill the earthworms or the fish will have a good meal, and what they don’t realize is that earthworms can live quite happily underwater for about three weeks or more if the water is oxygenated enough.” (He says that, while the research he has seen on earthworms’ ability to survive in water was not done on Amynthas, multiple terrestrial earthworm species seem to fare well underwater.)

Henshue has tips for helping to prevent the spread of Amynthas and Metaphire: Don’t use jumping worms as bait. Be vigilant when taking part in plant swaps. Obtain clean mulch and compost from reliable sources. He notes a single distributor of unbagged mulch could have a huge impact on a large region if they sell contaminated products to numerous households and organizations.

Unfortunately, once earthworms have moved in, they can be tough to get rid of, Henshue says. (He recently found earthworms at a density of about 400 per square meter of surface area in a sampling study in Pennsylvania.)

“There’s not a very good solution, because we don’t have anything that specifically targets these earthworms,” he says. “The quick and dirty way would be to just kill everything, and that’s not OK. You’d wipe out beneficial insects and microbes, as well. So, the best thing we can do is prevention. Be vigilant about mulch piles, root cuttings and plant swaps. Don’t use these things as bait.”