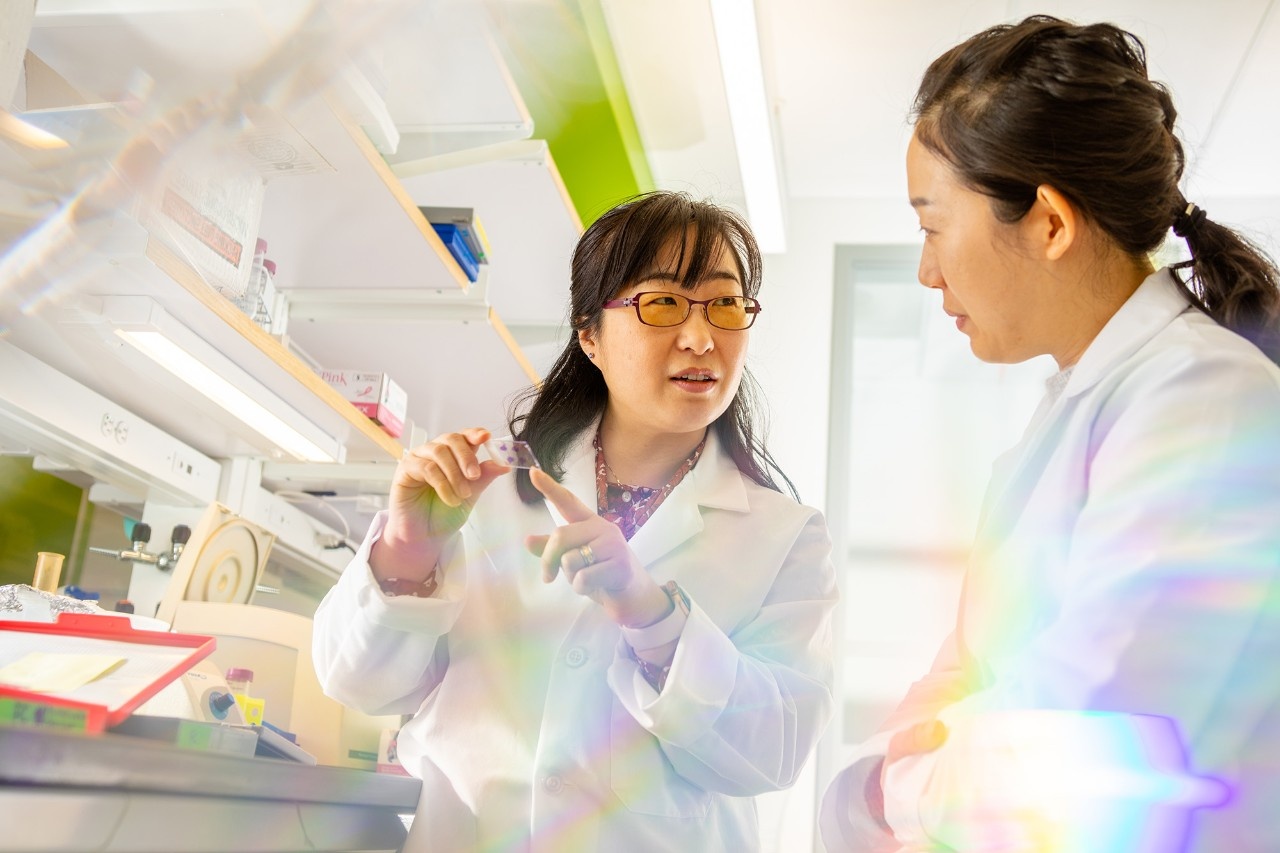 University at Buffalo biologists Soo-Kyung Lee and Jae Lee have devoted their careers to studying FOXG1 syndrome, a neurological disorder that affects their daughter, Yuna.

This August, as part of that work, the couple took part in the FOXG1 Science Symposium 2020, which brought researchers, industry executives and families together for two days of presentations and conversation about the latest scientific advancements tied to the disease.

The disorder, caused by mutations in a gene called FOXG1, can lead to severe abnormalities in brain development. When Yuna was younger, she suffered from many seizures and had trouble swallowing milk. Now, at 10 years old, the seizures have subsided and she is a joyful child, but she still cannot eat, walk or get dressed on her own.

“It is exciting to see how the FOXG1 community has grown worldwide and is coming together to support each other and FOXG1 research,” says Soo-Kyung, Ph.D., Empire Innovation Professor and Om P. Bahl Endowed Professor of Biological Sciences in the UB College of Arts and Sciences.

“This is our second FOXG1 science symposium. Our first symposium two years ago was really about basic science. This year, we’re really focused on answering the question of what we know about FOXG1 syndrome, and what the path forward is toward potential therapies,” says Nicole Johnson, president and co-founder of the FOXG1 Research Foundation, which organized the event and has funded the research of the Lees and other scientists. Johnson’s daughter, Josie, has FOXG1 syndrome.

The symposium – originally scheduled to take place at UB – was instead hosted virtually from Aug. 17-18. About 300 people attended, Johnson says.

A Growing FOXG1 Community, and Advancements in Science

Johnson notes that, while FOXG1 syndrome is a rare disease, the number of diagnosed cases is rising as genetic sequencing becomes more accessible, as FOXG1 has been added to several diagnosis panels, and as awareness of the disorder grows. Globally, the number of known patients has topped 700, according to the FOXG1 Research Foundation, which tracks cases through means such as a private social media group for families of children with FOXG1 mutations.

The growth of this community has given caregivers a support network. Soo-Kyung recalls that, earlier this year, she and Jae received a message from a family in China with a baby girl who has FOXG1 syndrome, saying that they had enjoyed reading about the Lees’ research and Yuna’s progress.

“It is so heartwarming to know that someone out there finds comfort in our research efforts and is cheering for us,” Soo-Kyung says.

Prior to Yuna’s birth, Soo-Kyung’s lab focused on understanding the development of the central nervous system, with much of that work centering on transcription factors that regulate gene expression. Jae is also an expert on gene transcription. So, when Yuna was diagnosed with FOXG1 syndrome, her parents were perfectly positioned to pivot and make FOXG1 the focal point of their work (FOXG1 is a transcription factor that plays a crucial role in development of the human brain.)

Together, the Lees are making discoveries about the functions of FOXG1, and breeding mice with FOXG1 mutations that mirror those found in human patients. The ultimate goal of their work is to develop a treatment: Though problems in early brain development cannot be reversed, a therapy could alleviate some symptoms.

“The symposium gave FOXG1 scientists around the world the chance to get together to share their work, with the potential to build collaborations,” Jae says.

For families who attended, “It’s very hopeful for parents to see so much work being done, and see different scientists really investing their entire work in FOXG1,” Johnson says. “It gives hope.”