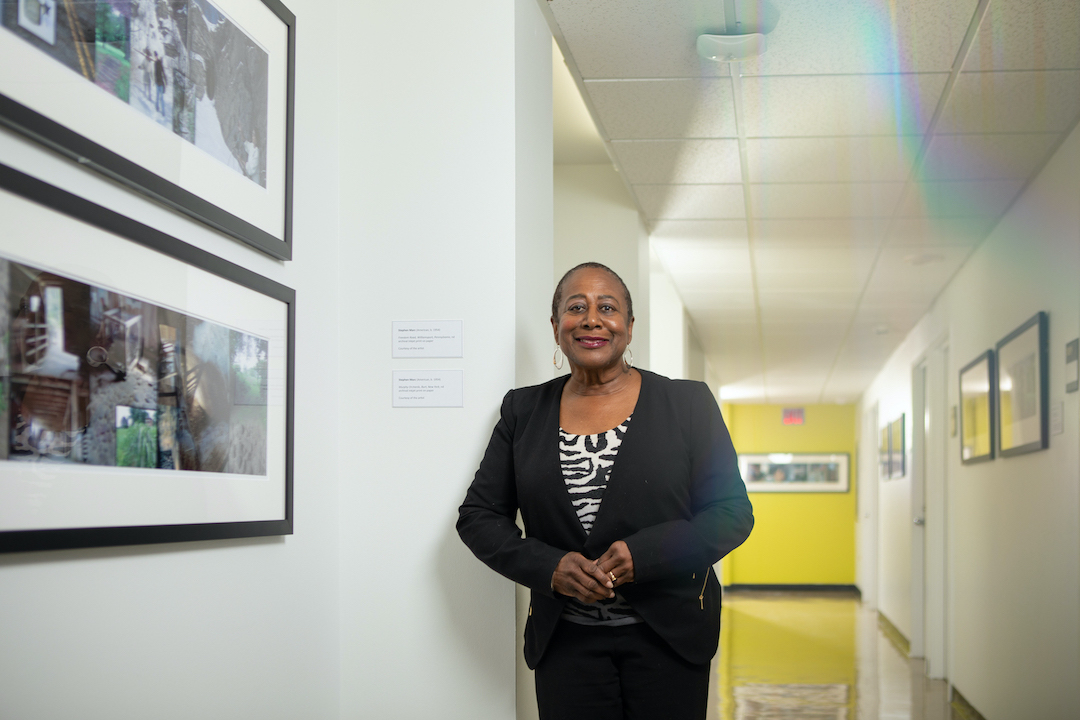 A century separates the lives of these two women, but they share much in common: Both are educators and community activists. Both are deeply committed to the fight for social justice. Both are tireless in their work.

Talbert, born in 1866, was an early 20th century reformer, described by the National Women’s Hall of Fame as a “civil rights and anti-lynching activist, suffragist, preservationist, international human rights proponent, and educator.” She served as president of the National Association of Colored Women’s Clubs (NACWC); rose to become a vice president of the NAACP; helped found multiple NAACP chapters; and spoke nationally and internationally to advance an array of causes. She was the first woman to receive the NAACP’s Springarn Medal, the organization’s highest honor. She died in 1923.

Williams, Ph.D., is an associate professor in the department of transnational studies in the University at Buffalo College of Arts and Sciences. An expert on U.S. social and urban history, much of her scholarship has sought to preserve the history of women and African Americans.

For over 40 years, retracing and celebrating Talbert’s remarkable life has been part of that work.

To conduct this research, which is still underway, Williams has journeyed across the United States, visited Europe, collected Talbert’s letters and speeches, sifted through meeting notes from organizations that Talbert joined, walked the corridors of myriad libraries, pored over microfilm, and clocked countless car and airline miles in pursuit of newspaper clippings and other historical files.

“I’m fascinated by her,” Williams says. “And when I look at her story, it talks about tenacity, it talks about vision, it talks about the efforts – I mean, consistent efforts – to improve life for other people. In the materials that I have, her philosophy stays true: She’s on this path to make America all that it should be, to make the liberal documents upon which this country was built a reality for all Americans.”

“At the turn of the 20th century, once slavery ended, there was a huge demand for Black labor, and sharecropping emerged, and then with the industrialization of the South, again a need for African American labor and convict leasing emerged. Black people were criminalized,” Williams says. “Walking on the wrong side of the street, looking a white person in their eyes. Being wealthy was a crime, because you challenged the status quo that essentially said that African Americans were inferior, incompetent and incapable of anything, especially if it involved the intellect.” It was in this era that Talbert did her work.

In 1989, The Buffalo News published a story on Williams’ quest to learn about Talbert’s life. By then, Williams was more than a decade deep into her research on Talbert. Though a book-length biography is still in progress, she has published a number of shorter articles on Talbert’s life. She has also worked persistently to bring local and national recognition to Talbert’s legacy through writing, lectures, media interviews and historical recognition projects.

In 2005, Williams teamed up with Madeline Scott, president of the Afro-American Historical Association of the Niagara Frontier, to successfully nominate Talbert to the National Women’s Hall of Fame. Williams strengthened the application’s historical narrative.

The naming of Talbert Hall at UB also resulted from Williams’ efforts. As a UB graduate student in the 1970s, Williams nominated Talbert for the honor, preparing a proposal that was selected by a campus committee. In 2020, the university renamed a campus road after Talbert, replacing the name of James O. Putnam, a lawyer and politician who served as UB chancellor from 1895-1902 and expressed racist views.

Williams’ work on Talbert also intersected with other research endeavors. Williams’ 1999 book, “Strangers in the Land of Paradise: The Creation of an African American Community, Buffalo, New York, 1900-1940,” included discussion of Talbert’s achievements. In relation to the NACWC, which Talbert led from 1916-20, Williams edited the microfilm edition of the association’s papers, preserving NACWC history and making correspondence, convention programs and minutes, handbooks and other records accessible to future historians.

“She catalogued the NACWC’s papers, and preservation is so crucial,” says Barbara Seals Nevergold, Ph.D., co-founder of the Uncrowned Queens Institute for Research & Education on Women. Nevergold also notes Williams was one of the founders of the Afro-American Historical Association of the Niagara Frontier, which has created expansive microfilm collections of records of African American organizations and individuals in Western New York.

“Efforts like these set a bar for the idea that African American history was important, that it was extant, that it could be retrieved – that it should be preserved and made available for current researchers,” Nevergold says. “That’s a tremendous contribution.”

Nevergold – who has known Williams since the 1960s, when the two taught at the same junior high school – says Williams’ enduring interest in Talbert is helping to illuminate the life of an important historical figure who has often been overlooked.

“Mary Talbert is an extraordinary individual,” Nevergold says. “We talk about American history being broader than just traditionally what has been in the history texts. Mary Talbert provides some very early examples of someone that we would want to have children understand and know and be inspired by.”

Talbert grew up in Oberlin, Ohio, a “center of abolition and liberal thinking at the time,” Williams says. Talbert’s parents were entrepreneurs: Her father ran a barber shop, and her mother ran a boarding house and restaurant near Oberlin College, where Talbert enrolled after finishing high school at age 16.

Upon receiving a degree from Oberlin in 1886, Talbert moved to Arkansas, where she taught and then served as a high school principal. In 1891, she married William Talbert and joined him in Buffalo, where he was a city clerk and realtor. Their only child, Sarah May, who became a composer and pianist, was born in 1892.

Williams says it was around the turn of the 20th century that Mary Talbert became a prominent voice in public life, lecturing on causes such as the women’s right to vote and making important contributions to organizations such as the NAACP and NACWC.

As Talbert’s biography in the National Women’s Hall of Fame states, “With conscious intent, she bridged the generation of 19th century abolitionists and freedom seekers: Tubman, Douglass, Truth, and others, and the developing civil rights leadership of the 20th century.”

Elements that drove Talbert to protest injustice and fight for change included her family’s wealth, her education and her religious convictions, Williams says.

The breadth of Talbert’s advocacy was astounding: Locally, she was active in Buffalo’s Michigan Avenue Baptist Church, which had operated as a meeting place for abolitionists and a stop on the Underground Railroad. She started a church literary society that addressed social issues affecting African American people; lobbied the news media for fair coverage of African American people; and was a charter member of Buffalo’s Phyllis Wheatley Club, an organization of African American women that established kindergartens for Black children, purchased and donated books to the library, hosted mother’s groups and fought for human rights and woman suffrage. Founded in 1899, the Buffalo group became an affiliate of the NACWC.

Talbert also devoted energy to national causes. As NACWC president, she led efforts to purchase and restore the home of Frederick Douglass, now a National Historic Site, and campaigned for prison reform in the Jim Crow South.

“She shed light on this issue,” Williams says. “In the South, you saw the criminalization of children and incarceration of children as young as 5 years old. Mary Talbert traveled throughout the South and explored these circumstances and spoke out against them. The NACWC, in response, began to establish a number of reform institutions so they could house these babies, so that these children would not be imprisoned with adults.”

Talbert also helped build the NAACP, founded in 1909. She served as an NAACP vice president and board member, and as national director of the organization’s anti-lynching crusade, raising about $12,000 for that cause through speaking engagements alone, Williams says. Williams also discovered Talbert helped to start branches of the NAACP in the South and West.

Internationally, Talbert served as Red Cross nurse during World War I, wrote to European leaders, protested atrocities tied to colonialism, and advocated for the rights of children born out of wedlock as a delegate to the International Council of Women's conference in Norway in 1920, Williams says. In 1922, Williams adds, Talbert joined other former NACWC presidents and founded the International Council of Women of the Darker Races that brought together women from Africa, Asia, the Caribbean and women of color in the United States to address white supremacy and its impact upon their constituents.

Talbert had a gift for forming coalitions and connecting with varied audiences, from national and international leaders to grassroots activists, says Sibyl E. Moses, Ph.D., a reference specialist for African American history and culture at the Library of Congress who has helped Williams locate many records pertaining to Talbert.

Moses, who is also a public historian, engaged Williams to write a multipart series on Talbert for a magazine Moses edited – “The Phyllis” – which covers the history of the Order of the Eastern Star and other women’s organizations affiliated with Prince Hall Freemasonry. Talbert was a member of the Order of the Eastern Star (PHA) and the first Worthy Matron of Naomi Chapter No. 10 in Buffalo, into which Williams also was initiated, Moses says.

“Mary Talbert was a role model for social activism, Moses says. “She used her national networks with organizations such as the NACWC and the Order of the Eastern Star (PHA) to facilitate an agenda that was in the interest of the race. She could speak to people from all backgrounds, and she encouraged everyone to be well-prepared and knowledgeable.”

Talbert was born the year after the 13th Amendment to the U.S. Constitution abolished slavery. The 19th Amendment, granting women the right to vote, was ratified in 1920, three years before she died.

Williams says that stories like Talbert’s must be remembered: They are part of a fight for freedom that continues today. The work of Talbert’s generation built on the activism of their predecessors and laid the foundation for the civil rights movement of the 1960s. Today’s push for progress through Black Lives Matter is another chapter in that history, Williams says. Then as now, it is the same fight, she says: “a persistent struggle to dismantle systemic racism and to improve life.”