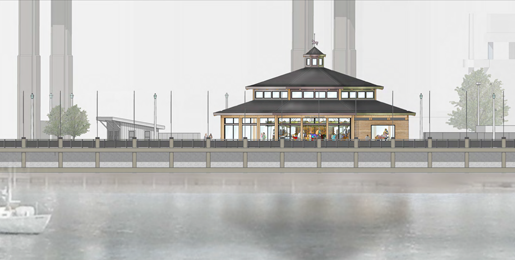 An artist's rendering of the Buffalo Heritage Carousel project at Canalside, courtesy of Empire State Development.

Gov. Andrew Cuomo on Wednesday announced the start of timber construction on the Buffalo Heritage Carousel project at Canalside. The project consists of a new building near the corner of Prime and Perry streets to house the near-century-old De Angelis Carousel. The carousel is planned to open in the summer of 2021.

"The De Angelis Carousel is a symbol of Buffalo's proud history and its bright future, and we're honored to help preserve this local gem for generations to come," Cuomo said. "As we continue to reopen our economy and New Yorkers look to the outdoors more than ever, it's critical that we remain committed to our efforts to revitalize the city's once forgotten waterfront, which has transformed into a vibrant, must-see part of Buffalo."

"We are one step closer to building a magnificent home for the De Angelis Carousel at Canalside," Lt. Gov. Kathy Hochul said. "This continues the transformation of Buffalo's waterfront that has drawn praise from visitors and publications from around the world, and the Buffalo Heritage Carousel will be a star attraction. New York state is building back better and smarter for a post-pandemic future, and I look forward to welcoming everyone back when it's completed and available for residents and visitors to enjoy."

The heavy timber frame of the carousel building will be a hybrid of traditional timber framing and modern steel-connected timber. The 27,250-board-feet of wood is fabricated from Douglas fir. The perimeter wood supports will be exposed on the exterior of the building, as well as exposed on the underside of the roof both inside and outside the building. The roof deck, made of two-by-four tongue and groove Douglas fir, will also be exposed on both the inside and outside of the building.

Erie Canal Harbor Development Corp. Chairman Robert Gioia said, "It is exciting to see the one-of-a-kind carousel building beginning to take shape, adding to Gov. Cuomo's overall vision for Buffalo's vibrant waterfront. Children visiting Canalside will enjoy watching the construction crews working to turn a pile of timber and steel into the next waterfront attraction. The carousel project is designed to complement the Explore & More Children's Museum and the Longshed project, which will be completed this fall."

The vintage menagerie, park-style carousel that will be installed inside the carousel building was manufactured in 1924 by Spillman Engineering in North Tonawanda for Dominick De Angelis. The carousel was in operation until the 1950s at which point it was stored by the De Angelis family until Buffalo Heritage Carousel acquired it in 2016 with the generous support of the Margaret L. Wendt Foundation with a goal of providing family-oriented recreation on Buffalo's waterfront and to celebrate Western New York's industrial heritage.

The Buffalo Heritage Carousel artists continue to work on the meticulous restoration of the carousel pieces while raising funds to build, operate and maintain the carousel. Carousel sponsorships are available including for the Wurlitzer band organ and adopt-a horse/animals.

The state awarded a $1.2 million matching grant, funded by New York Power Authority, to begin the $5.8 million project; which includes $4 million for the roundhouse building, $1 million for the carousel, and $800,000 for operations. KeyBank and the First Niagara Foundation matched the state's grant of $1.2 million.

NYPA Chairman and Buffalo resident John R. Koelmel said, "Once complete, this restored carousel will be a wonderful attraction in the region. NYPA is proud to be a strong leader in redeveloping the waterfront in Buffalo through our significant funding and other support."

Board President of Buffalo Heritage Carousel Inc. Laurie Hauer-LaDuca said, "This is a very exciting moment in our project timeline as the carousel roundhouse begins to rise from its foundation, bringing the beautifully restored carousel's home closer to a reality and bolstering excitement in the community as we all anxiously await the opportunity to enjoy this classic family attraction at Canalside."

City of Buffalo Mayor Byron Brown said, "The historic De Angelis Carousel will be another year-round, family-friendly attraction for the Buffalo waterfront, building on the popularity of the Explore & More Children's Museum and many other activities for visitors of all ages. My administration and the Buffalo Common Council were pleased to transfer this parcel at the intersection of Perry and Prime streets to Erie Canal Harbor Development Corp. for $1, to accommodate this $5.3 million project, which will add to the Buffalo waterfront's growing reputation as a world-class destination."

New York State Sen. Tim Kennedy said, "Buffalo's waterfront has seen a remarkable transformation, and this project will continue to preserve the progress that has been made involving the historic De Angelis Carousel. This investment in our community will be reflected for years to come, giving families and visitors the access to a true historic gem."

Majority Leader Crystal Peoples-Stokes said, "The De Angelis Carousel is an important piece of the puzzle in turning Buffalo's waterfront into a world-class attraction. Thanks to the funding my colleagues in Albany were able to secure and additional financial support from NYPA, this historic attraction will once again be a centerpiece for millions of visitors to enjoy."

Ryan said, "The Buffalo Heritage Carousel will be a year-round attraction and will build on the progress of many other elements of Canalside, helping to draw more visitors to our magnificent and growing waterfront. This project has always been a labor of love. I have visited the volunteers who are working around the clock to restore the carousel to its former glory, and I have seen firsthand their incredible craftsmanship. Today we celebrate an important step forward, and I look forward to soon welcoming the fully restored De Angelis Carousel to its new home in the City of Buffalo."

The state has committed more than $90 million to transform Buffalo's Inner Harbor into what is now known as Canalside, a mixed-use urban entertainment destination that has received national and international attention as one of the key drivers of the remarkable resurgence of Western New York. Open to the public since May 2008, Canalside features several fully restored facets of the original Erie Canal, including the commercial slip, boardwalk and the historic replica canals.

A year-round attraction that traditionally hosts nearly 1.5 million visitors annually, Canalside is working during the pandemic to continue to provide a limited assortment of events, family activities, attractions, historical and cultural programming, art and food that showcases the diverse resources of the Western New York region. In addition, the historic replica canals are frozen in the winter months to become New York state's largest outdoor ice-skating rink.

Buffalo Heritage Carousel Inc. was formed as a 501(c)(3) nonprofit organization to purchase, restore a vintage menagerie, park-style carousel that was manufactured in 1924 by Spillman Engineering in North Tonawanda and to house the carousel in a building at the revitalized urban waterfront at Canalside. The carousel will be solar-powered. The mission of Buffalo Heritage Carousel Inc. is to provide entertainment, education and to celebrate the history of carousel manufacturing in Western New York.