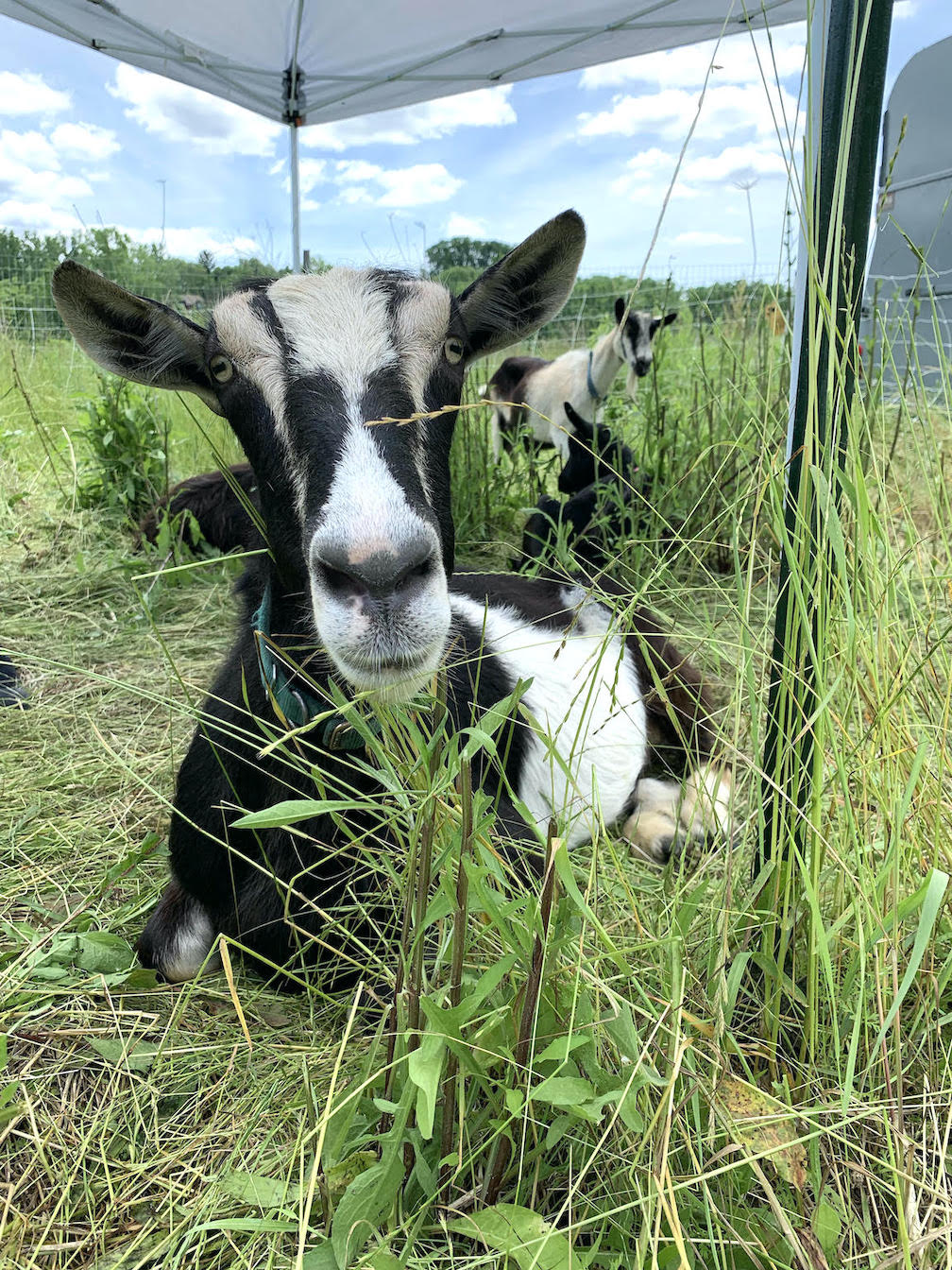 Silo City to get goatscaping treatment, makeover as part of pilot project for The Riverline

A team of Let’s Goat Buffalo goats has deployed to the campus of iconic Silo City, one of Buffalo’s most notable landmarks. The pilot project is aimed at eliminating invasive mugwort and is sponsored by the Western New York Land Conservancy as part of its ongoing effort to develop The Riverline in downtown Buffalo.

The Land Conservancy said, “Goats offer a unique and organic opportunity to control invasive vegetation. With their specialized digestive systems, they break down seeds and slow the regrowth cycles of invasive plants. As part of the project, the six goats will be penned in a safe enclosure until July 17, where they will graze. Their droppings will provide nutrients to the soil, assisting Silo City’s director of ecology, Josh Smith, in his efforts to regenerate the historic site with native plants.”

Let’s Goat Buffalo, Silo City, and the Land Conservancy teamed up as part of their joint commitment to reimagine this Buffalo River landscape as they seek to develop a healthy and vibrant city that will benefit people, plants and animals.

“This collaboration is tackling a major problem of invasive plants in an exciting and innovative way,” Lt. Gov. Kathy Hochul said. “The project with the Western New York Land Conservancy offers a unique opportunity to explore creative solutions while adapting infrastructure for modern use as part of the ongoing efforts to develop The Riverline. These goats are an important investment in a revitalized Silo City and will continue to help stimulate growth and success in Buffalo and the entire Western New York region.”

Rick Smith, CEO of Rigidized Metals Corp. and the owner of Silo City, said he is excited to see the goats munching mugwort on his property.

“When you visit this site, the first thing you see are the historic grain elevators,” he said. “But there’s nearly 30 acres of land surrounding those grain elevators, and developing a healthy ecosystem filled with biodiversity is part of our long-term plan for the site. It will be a natural attraction for future residents of Silo City, for visitors, and for the plants and animals that call Western New York home.”

When it comes to invasive species removal, the Land Conservancy and Let’s Goat Buffalo share a vision, and this is not the first time they’ve teamed up. In 2019 and again this year, they collaborated on the Land Conservancy’s historic Stella Niagara Preserve.

Jennifer Zeitler, founder and director of Let’s Goat Buffalo, said, “This Silo City project speaks to the heart of what Let’s Goat Buffalo was founded to do, which is reintroduce old ways of managing land to address modern problems. We are honored to work with the Western New York Land Conservancy on such a historically significant site at Silo City. We hope to do the same along The Riverline on the other side of the Buffalo River soon.”

For Nancy Smith, the Land Conservancy’s executive director, invasive species removal is an important part of the revitalization of The Riverline, the future greenway that will run for 1.5 miles from the Buffalo River across from Riverbend to the DL & W Terminal at Canalside.

“This formerly industrial landscape will become a place where people can reconnect with nature and each other,” she said. “And we’re thrilled to partner with Let’s Goat Buffalo and Silo City on this innovative method to restore wildlife habitat. When The Riverline becomes a reality, this pilot project will put us ahead of the curve.” 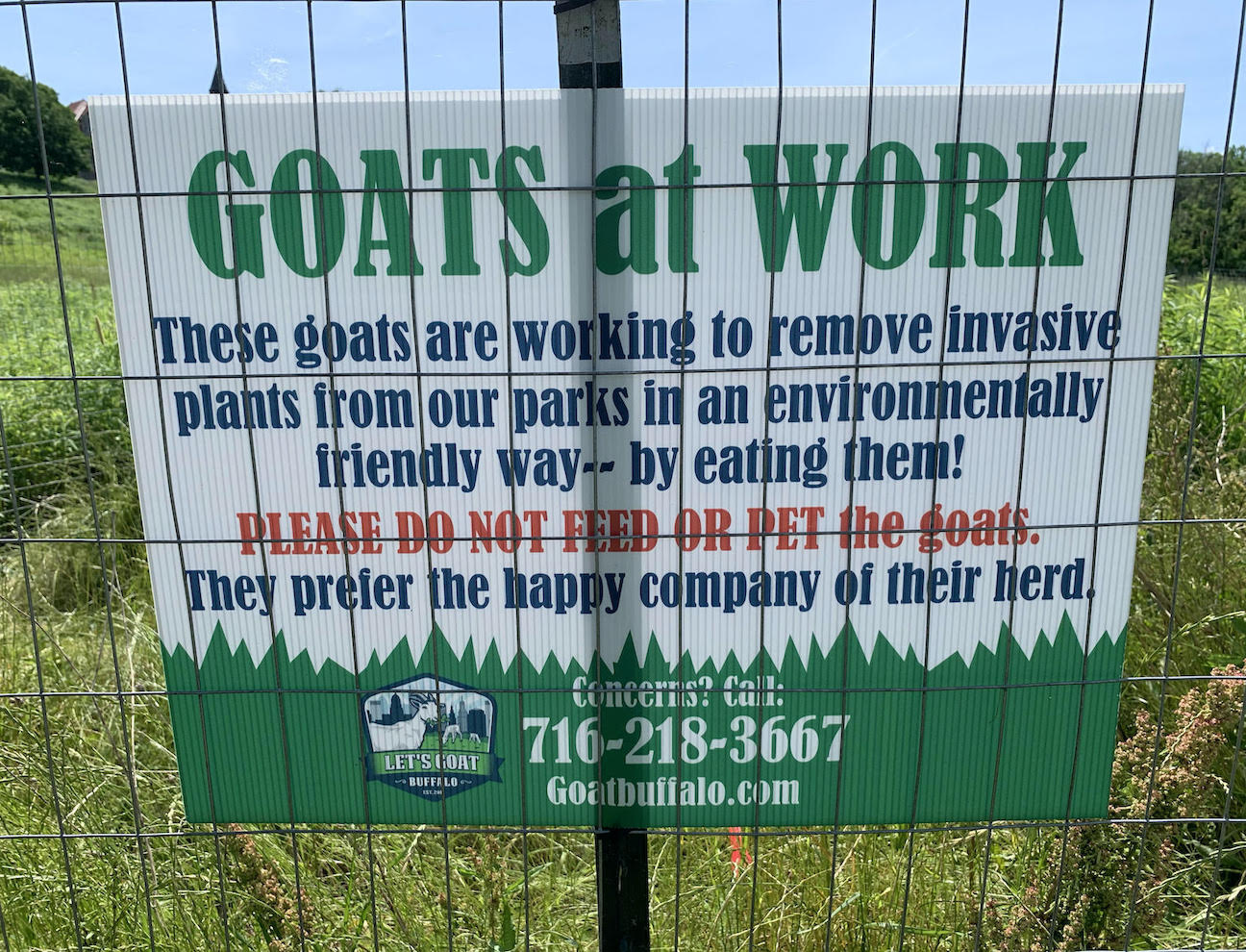