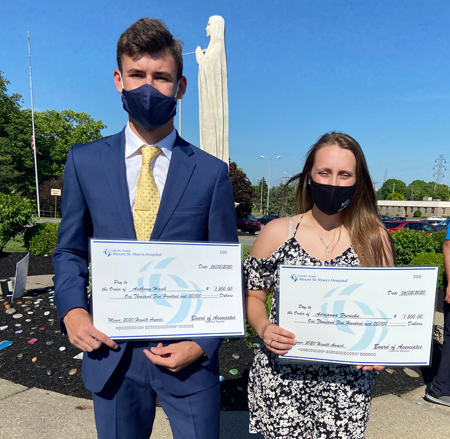 Adrianna Frerichs of Wilson and Anthony Haak of Lockport were named the winners of the 55th annual Thomas E. Hewitt Sports Awards.

Sponsored by the board of associates of Mount St. Mary’s Hospital, the awards recognize the top male and female scholar athletes from seven area high schools. The awards are named for the late city editor of the Niagara Gazette, and include scholarships of $1,500 to the top male and female candidates as determined by a panel of judges. In addition, each nominee receives a $100 award.

In previous years, a special awards dinner was held where students were recognized for their accomplishments. Due to the COVID-19 pandemic, this wasn’t possible this year. However, the awards of $1,500 were still presented to the winners, who stood outside of Mount St. Mary’s Hospital.

Judging was based on scholastic achievement, athletic achievement, school and community involvement, and a personal interview (this year over the phone) with the judges. This year’s judges were:

Lawrence Puzan, past athletic director for Niagara Catholic and the head softball coach at Niagara University

Female winner: Adrianna earned a 97.22 weighted average, high honors recognition all semesters, and was an All-WNY Scholar Athlete Award, Wilson Academic Letter and Wilson Champion Award. She is a member of the National Honor Society, Captains Club, Athletic Office Helper and Niagara County 4-H. Adrianna volunteers with the American Red Cross and for several local community events such as the “Dig Pink” breast cancer fundraiser, Niagara County Fair, Wilson Youth Football and is a youth girls basketball referee. Athletically, Adrianna was named first-team all-league for basketball and softball and earned an MVP for volleyball and softball. She is captain of the varsity softball, travel softball and volleyball teams; she is also a member of the varsity basketball team. Adrianna plans to attend Houghton College where she will play softball and major in inclusive childhood education with an extension into middle school science.