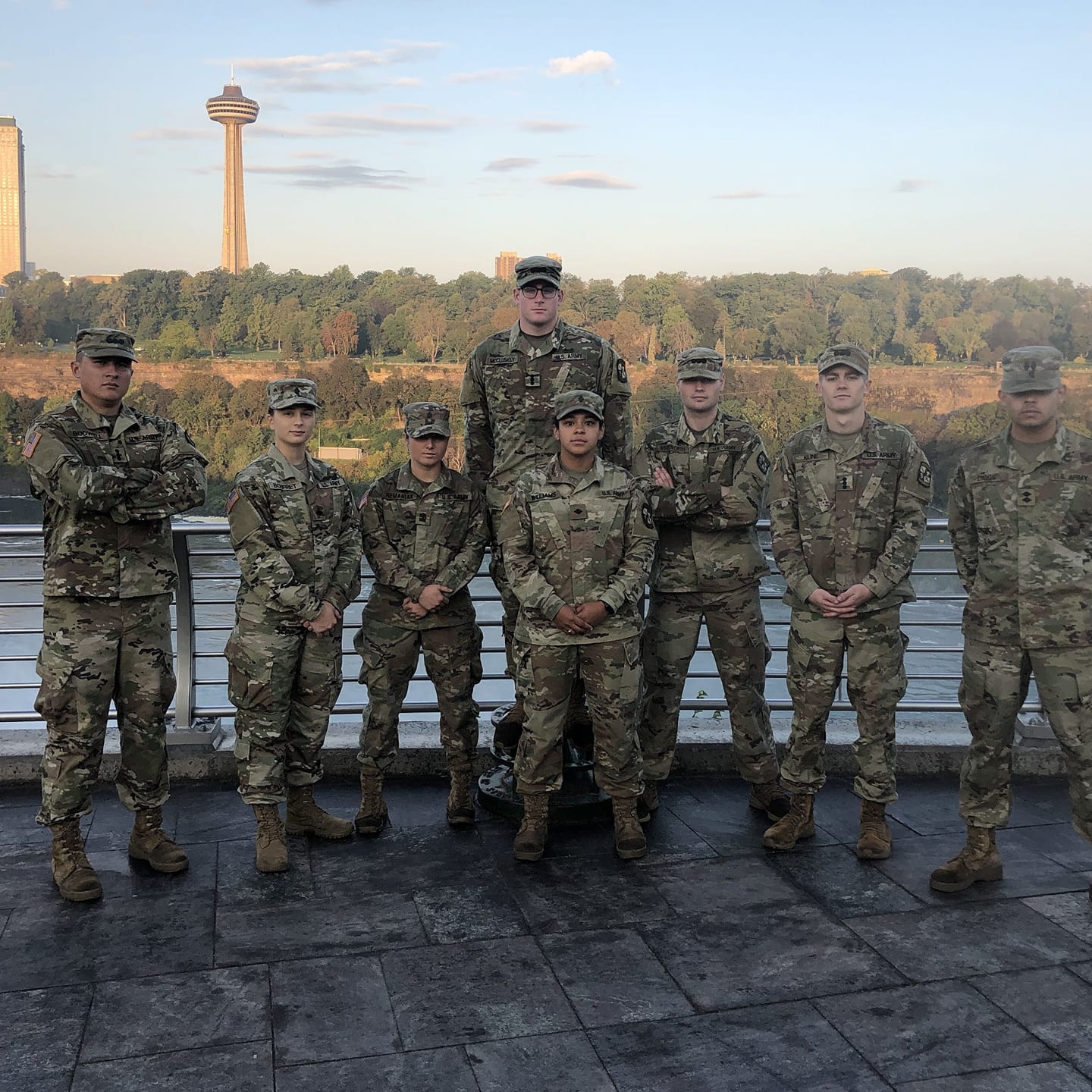 Seven Niagara University Reserve Officers’ Training Corps (ROTC) cadets were commissioned as second lieutenants in the United States Army during ceremonies held May 23 on the Niagara University campus. While this was the 79th consecutive year that members of NU’s Purple Eagle Battalion have taken the oath of office, it was the first time the ceremony contained both virtual and face-to-face elements.

“This year’s virtual format is unprecedented, but the weight of this occasion is no less significant,” said Maj. Joe Murillo, assistant professor of military science, in his welcome.

“Today, despite the unprecedented challenges facing our nation, we continue a Niagara University tradition that dates back to 1940, as we prepare to commission seven cadets as officers in the United States Army,” he said. “They join a proud Purple Eagle legacy that includes alumni who have served with distinction as military leaders in World War II, Korea, Vietnam, Kuwait, the Balkans, Iraq and Afghanistan. I have no doubt they will add to Niagara’s rich military history and distinguish themselves as our Army continues to face complex challenges around the world.”

NU alumnus Gen. (Ret.) Walter Kross, ’64, president and CEO of Flight Explorer and a member of the Niagara University Military Hall of Fame, was the guest speaker during the virtual portion. Kross’ 34-year military career included 158 combat missions in Vietnam as an Air Force pilot, roles as director of operations and logistics for all defense transportation requirements during Operation Desert Shield and Operation Desert Storm, and head of both U.S. Transportation Command and Air Mobility Command. The four-star general noted the cadets were embarking on missions that were driven by a pure commitment to service, and offered the following advice: “Run to the fire, volunteer early, be proactive, and don’t wait for somebody to tell you what to do.”

Following remarks from Niagara University's president, the Rev. James Maher, C.M., and the blessing of the ranks and benediction by the Rev. Aidan Rooney, vice president for mission integration, the ceremony transitioned from a virtual format to a live, face-to-face event. The cadets chose locations on campus that held significance to them for their own personalized commissioning ceremony, which was limited to no more than 10 family members and friends due to COVID-19 restrictions. Czekanski administered the oath of office for each cadet, followed by the pinning of their rank by select family and/or friends, and receipt of their first salute from a former or current enlisted service member of their choosing.

The new second lieutenants are:

The seven cadets also gave a campus flagpole as a class gift, establishing a new tradition for future graduating classes to give a gift to benefit the university and/or the ROTC program.

Army ROTC is a leadership development program designed to augment the college learning experience. Its primary goals are to identify, instruct and commission young men and women for service as officers in the Active Duty Army, the U.S. Army Reserve, or the Army National Guard. Intermediate goals include providing students with the leadership skills necessary to organize and effectively run the Purple Eagle Battalion, clubs on campus, or student government.

Niagara University’s ROTC program regularly ranks in the top 10 percent of all Army ROTC programs in the country. Its rise to excellence culminated in 2004, when it was the top-ranked program in the nation.