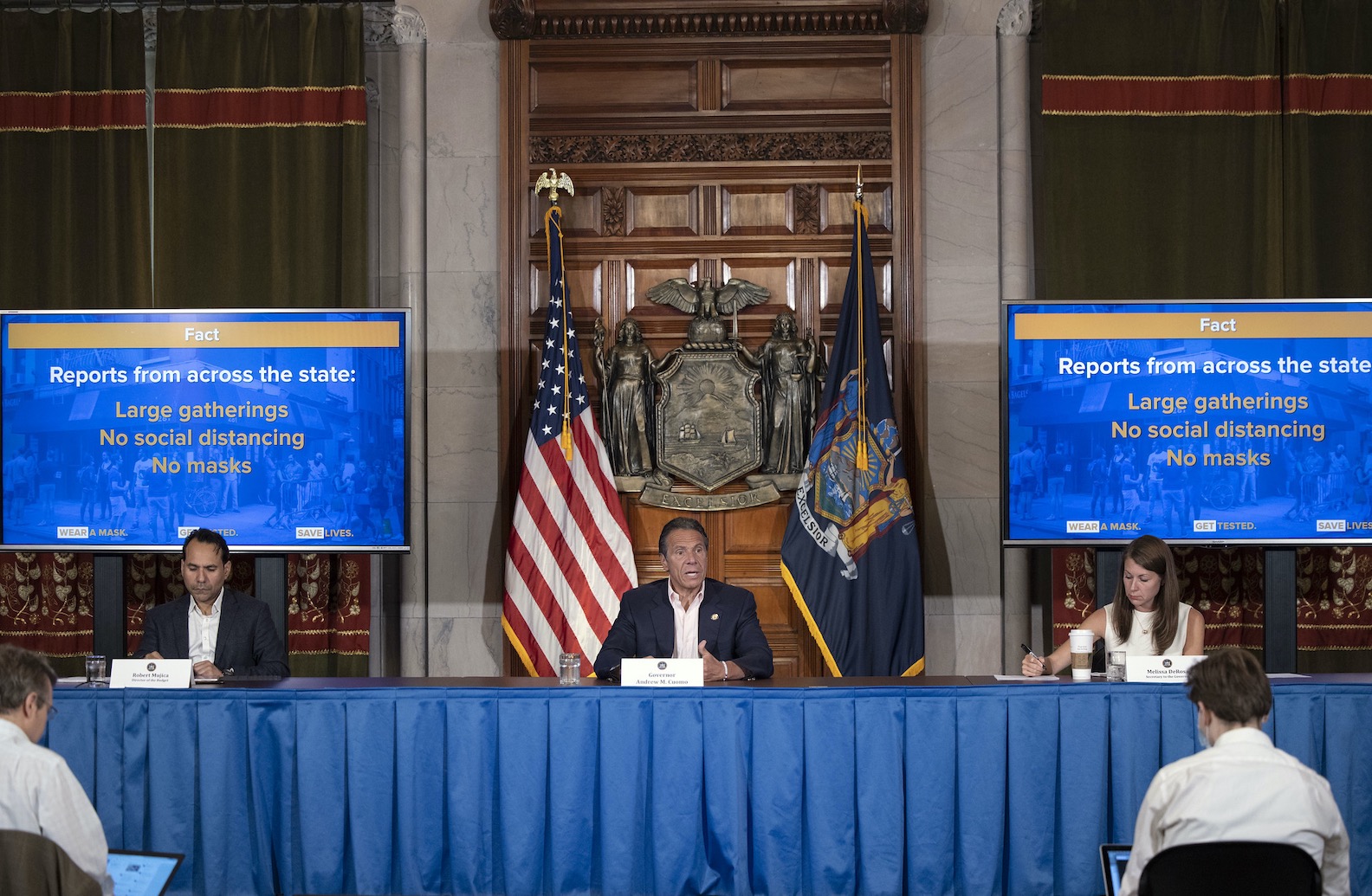 Gov. Andrew Cuomo provided a coronavirus update during a press conference Sunday in the Red Room at the State Capitol. (Photo by Mike Groll/Office of Gov. Andrew M. Cuomo)

Speaking to reporters on Sunday, Gov. Andrew Cuomo warned he could stop reopened regions from advancing to the next phase, knock them down a phase, or send them back to “New York State on PAUSE” nonessential closings if they get too loose with safety regulations designed to limit the spread of the coronavirus.

Speaking of COVID-19, he said, “New York state has been following the data and, on the numbers, we're making really great progress – and today is another great day in terms of achievement by New Yorkers.” The state had its lowest number of coronavirus-related deaths in one day since the pandemic began in March: 23.

But he cautioned, “At the same time, you have another fact: the virus spread is increasing dramatically in post-reopening states across the nation. So, hold two facts in your hands. One: New York is doing better than any state in reducing the virus. Fact. Another fact. States post-reopening are seeing a dramatic increase. Not New York. Not yet. But that is a serious caution for us. And that's what I am focused on.”

“Now we're getting reports from all across the state that there are large gatherings, social distancing is being violated, people are not wearing masks. We have gotten 25,000 complaints to the state of businesses that are in violation of the reopening plan – 25,000 complaints. We have never received more complaints in a shorter period of time: 25,000 – just think about that.

“What's alarming about the 25,000 is the volume, but it also shows how smart people are and how offended people are that they're calling and complaining. This is a time in history we've never seen before. Think about how concerned New Yorkers are not just to see the violation, but then to care enough to come back and write a letter or call registering the complaint. You know why? They're afraid for themselves. They walk past the business. They see the businesses violating the rules and they are saying, ‘My health is jeopardized’ – my health – and that's why they're complaining.”

“A bar or restaurant that is violating these rules can lose their liquor license. State Liquor Authority inspectors are out. We have a task force of state investigators who are out. You can lose your liquor license – and that is a big deal for a bar or restaurant. We are not kidding around with this. You're talking about jeopardizing people's lives. It's a legal violation, and the SLA inspectors are out there. I am telling you that.”

“The social distancing, mask-wearing, these are legal violations. Protesters and police, the law applies to you. ‘Well, I'm protesting.’ Yeah, I understand that. You can protest. The law still applies to you. Police department, your job is to enforce the law. Why don't you follow the law? It's a very bad signal when you see police people who are not wearing a mask and not following the law. How can you enforce the law if you're not following the law? So, wear a mask.

Cuomo explained, “Before I reverse a statewide position, I'll tell you what I'm going to do: I'm going to reverse it in those areas that are not in compliance with the rules. I'm going to reverse it in those areas where those local governments did not comply with the law. That is what is going to happen here. I am warning today, in a nice way, consequences of your actions. We have 25,000 complaints statewide. I'm not going to turn a blind eye to that. New Yorkers deserve better. …

“Local government, do your job. If we have to close, then people are going to hold you accountable. Bars and restaurants, do your job, or you can have an SLA violation and possibly loss of your license. Individuals who are violating the law, you can be held liable also. We got here because people did the right thing, and if we stop doing the right thing we'll see a very different trajectory.

“I am telling you that you look at all the other states – it's not hard to figure out what is happening here. It's happened in half the states in the nation. So far, we have been the exception. We're not going to go back to that dark place, because local government didn't do its job or because some individuals exploited the situation besides the legal violation. Because our success here was not based on what government did. Our success here was based on individual action and social action. That's why this moment was so special. It's what 19 million people did, and they did what they had to do not because there was a legal sanction, not because I was going to knock on their door and hand them a ticket, that's not why they stayed home. That's not why they closed their business. They did it because it was the right thing to do. To these people who are now violating it. It's illegal. It's also wrong.

“It's also disrespectful to the people who you could infect. ‘Well, I'm 25, I'm a superhero, it's not going to bother me.’ First of all, you're wrong, it could kill you; but that's your life. It's disrespectful to the other people who you could infect. It's disrespectful to a parent, to a grandparent, to a cousin, to a brother, to someone who you run into on the sidewalk and you don't even know, but happens to have a compromised immune system, because they're battling cancer or because they're battling HIV, and you infect them you and wind up killing them.

“In some ways, we're in this great moment where society is so caring of the rights of one another and that's a beautiful thing. Well, then let's be caring about the rights of each other and respect people's health and respect people's lives. We're not asking for much. It's basic decency of a society and, again, that's what we did so well to get here in the first place.”