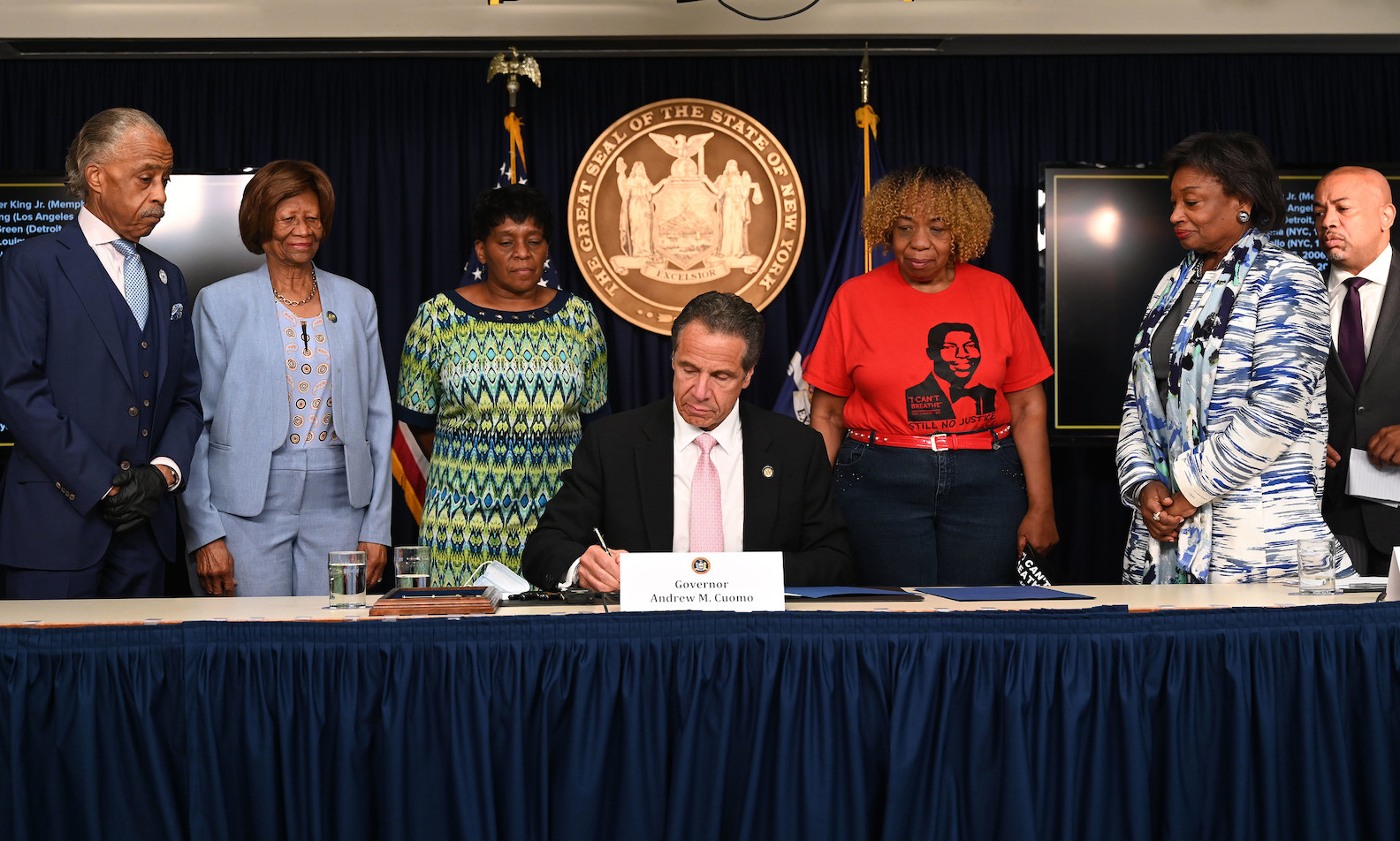 Gov. Andrew Cuomo on Friday signed the “Say Their Name” reform agenda package following the death of George Floyd and an ongoing pattern of police brutality against minority communities across the nation. These landmark policing reforms will help reduce inequality in policing and reimagine the state's criminal justice system. The reforms include:

√ Allowing for transparency of prior disciplinary records of law enforcement officers by repealing 50-a of the civil rights law;

√ Designating the attorney general as an independent prosecutor for matters relating to civilian deaths.

"The murder of George Floyd was just the tipping point of the systemic injustice and discrimination that has been going on in our nation for decades, if not centuries," Cuomo said. "These are issues that the country has been talking about for a long time, and these nation-leading reforms will make long-overdue changes to our policing and criminal justice systems while helping to restore community confidence in law enforcement. I want to applaud (Senate) Leader Stewart-Cousins and Speaker Heastie and the bill sponsors for working through these tough issues and for their fast action. New York state is the progressive capital. We never sit back and say just what the nation should do – we show the nation what it should do, and we did that again today."

Senate Majority Leader Andrea Stewart-Cousins said, "The horrific murder of George Floyd, the most recent in a long list of innocent people like Breonna Taylor, Ahmaud Arbery, Sean Reed, Tony McDade and so many more, has led to a rightful outpouring of grief and anger. Black New Yorkers, like all residents of this state, deserve to know that their rights, and lives, are valued and protected by our justice system. The legislation that will be signed today will help stop bad actors and send a clear message that brutality, racism, and unjustified killings will not be tolerated."

Assembly Speaker Carl Heastie said, "The tragic deaths of George Floyd, Breonna Taylor, Eric Garner, Ramarley Graham and so many others shake us to the core. This week, my colleagues and I in the Assembly majority answered the call of New Yorkers by passing historic reforms to our law enforcement system. These reforms have been championed by our members for years, and I want to thank my colleagues for their tireless commitment to seeing them through to the finish line. I would also like to thank the families of the victims and the passionate advocates who never tired in this fight for justice. They have courageously channeled their grief into a positive force for change and inspired us to deliver meaningful reforms here in New York."

Section 50-a of the New York State Civil Rights Law creates a special right of privacy for the personnel records of police officers, correction officers and firefighters and paramedics employed by the state or political subdivisions. The current law prevents access to both records of the disciplinary proceedings themselves and the recommendations or outcomes of those proceedings, leading to records of complaints or findings of law enforcement misconduct that did not result in criminal charges against an officer almost entirely inaccessible to the public.

A press release said, “Repealing 50-a will allow for the disclosure of law enforcement disciplinary records, increasing transparency and helping the public regain trust that law enforcement officers and agencies may be held accountable for misconduct.”

New York State Sen. Jamaal Bailey said, "As chair of the Codes Committee, I am proud to have introduced and helped pass a number of bills that will create greater transparency and accountability within police departments and increase public trust. 50-a is the statute that shields police disciplinary records from public scrutiny and repealing it is a critically important step to building bonds of trust between law enforcement and the communities that they serve.

“With the passage of this legislation, we balance the critical need to have transparency, while recognizing that law enforcement officers should be entitled to privacy protections concerning their personal information. Additionally, we codified into law Gov. Cuomo's executive order, making the attorney general a special prosecutor in situations that result in the death of unarmed people at the hands of law enforcement officers, and built upon it by creating a permanent office tasked with investigating these incidents.

“The lack of meaningful action taken after these incidents has caused the public's trust of the state's criminal justice system to waver. This legislation was an important step in restoring that trust by ensuring proper investigation and by making sure that criminal prosecutions are undertaken when necessary, consistent with the crime committed, aiming to give families of those killed by the police confidence in a fair and impartial process in their pursuit for justice.

“I want to recognize and thank all of the families whose unwavering tenacity and relentless pursuit of transparency, accountability and justice long overdue helped make these bills possible.”

Assembly Member Daniel J. O'Donnell said, "Today we open a new chapter for New York state – one that is more transparent, more accountable, and more just. As section 50-a of the New York State Civil Rights Law is repealed and new police reforms are implemented, we will see meaningful change for our communities. It will come in the baton that isn't swung, the gun that isn't fired, and the life that continues uninterrupted. It will come in the form of answers for those who have lost family members to police violence, allowing them to feel some measure of peace. I am deeply honored to have sponsored this bill for the past five years, and to have played a role in addressing the deep systemic issues plaguing our nation. I thank the advocates, Speaker Heastie, Senate sponsor Jamaal Bailey, and most of all, New Yorkers across the state who spoke out in recent weeks to demand urgent action. The repeal of 50-a and the police reform package passed by New York state is a monumental step forward. And the march toward justice will continue."

The press release said, “In 1993, the New York City Police Department completely banned its officers from using chokeholds, but the ban has not prevented police officers from using this method to restrain individuals whom they are trying to arrest and the continued use of chokeholds has resulted in too many deaths.” This new law creates criminal penalties when a police officer or peace officer uses a chokehold or similar restraint and causes serious physical injury or death.

New York State Sen. Brian Benjamin said, "Criminalizing the use of the chokehold by police or peace officers punishable up to 15 years in prison is an important step that will bringing sorely needed police accountability reform to New York State. It is time that we make it abundantly clear that no one is above the law. This is the first law that I am aware of that establishes an enhanced offense specifically on police officers and that is primarily because those who we hire to protect and serve must be held to a higher standard. I would like to thank the Senate and Assembly for passing the Eric Garner Anti-Chokehold Act, and Gov. Cuomo for signing this legislation that will help to save the lives of unarmed black men and women who encounter the police and hopefully begin the process of establishing trust and reducing tensions with law enforcement and communities of color."

Assembly Member Walter T. Mosley said, "George Floyd and Eric Garner yelled out the same words as they were brutally killed by police officers. We need real change to protect black Americans, and part of that is ensuring there are consequences for misconduct on the part of police officers. This legislation is one of many steps in that direction. I thank Gov. Cuomo for signing this bill into law and hope to continue working with his administration to make our state a fairer and more equal place to call home."

The press release said, “Recent years have shown a number of frivolous and false calls to 911 based on the callers' personal discomfort with other people and not for any particular threat.” This new law makes it a civil rights violation to call 911 to report a non-emergency incident involving a member of a protected class without reason to suspect a crime or an imminent threat.

New York State Sen. Kevin Parker said, "Social media is rampant with videos of people weaponizing the 911 emergency system against African-Americans hoping to see them falsely arrested or worse. This legislation is by no means a solution to the systemic injustices and prejudices that fuel these types of calls to the police. However, this law gives victims of this despicable behavior the beginnings of some recourse. I am glad that it was passed, together with other important police reform bills, and I thank Gov. Cuomo for signing it into law."

Assembly Member Diana Richardson said, "Today, I am proud that Gov. Cuomo has immediately signed into law my bill that makes it a crime to call 911 based on a person's race, color, national origin, ancestry, gender, religion, religious practice, age, disability or sexual orientation. No longer will people be able to use the 911 system to endanger others without consequence. This legislation is deeply meaningful to me, and I am honored to have played a role in effecting this long-needed change."

This new law establishes an Office of Special Investigation within the Office of the Attorney General to investigate and, where appropriate, prosecute cases where the death of a person follows an encounter with a law enforcement officer. The law also requires the new Office of Special Investigation to produce a report explaining the reasons for its decision regardless of whether it chooses to pursue charges. This will help improve public confidence in the criminal justice system by removing a potential conflict of interest in these types of investigations. This law builds on the governor's executive order No. 147 from 2015, which established the attorney general as an independent prosecutor in instances of police-involved deaths.

Assembly Member Nick Perry said, "Over 20 years since police unloaded 41 shots killing Amadou Diallo, nearly six years after the merciless choking of Eric Garner, it took the videos of the heartrending death of George Floyd to finally help us break through the blue wall of silence and resistance to the public cry for criminal justice reform and changes in the prosecution of cases involving death at the hands of the police, who are supposed to protect us. We know that this new law will not end our quest for an assurance for fairness in the process for prosecuting crimes by bad police officers, but it is a big step in the right direction. Millions of New Yorkers and I are delighted that the governor has signed this bill into law."