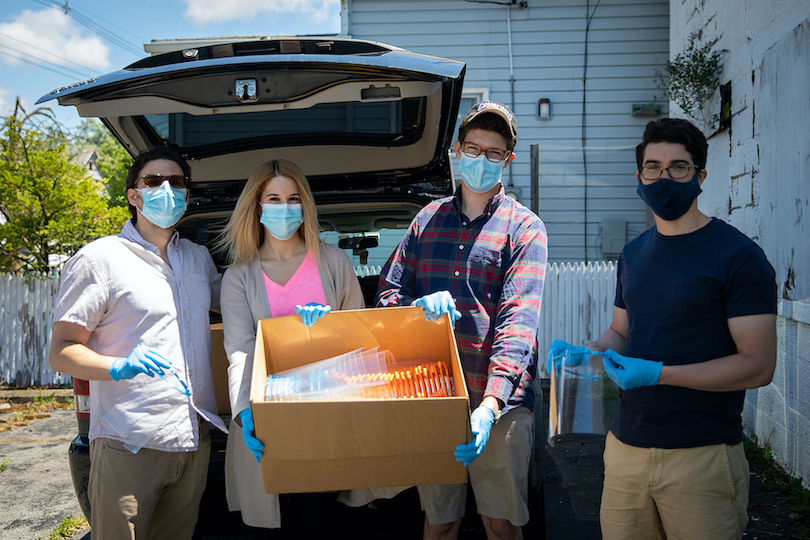 If you phone Jordan Levine pretty much anytime, day or night, you can hear the steady hum of a 3-D printer in the background.

The printer produces face shields, about 20 per day. Since mid-March and the peak of cases of COVID-19, when medical students were pulled from their clinical rotations, Levine and three of his classmates in the Jacobs School of Medicine and Biomedical Sciences at the University at Buffalo have been working on the face shields.

“We used this time as an opportunity to confront the personal protective equipment (PPE) shortage,” Levine said. “We saw that the people who were 3-D printing PPE were often the most successful as they were able to adapt to the rapidly changing recommendations, addressing the overflow of new information with a simple yet precise tweak in design. So, we familiarized ourselves with the various design softwares, invested in six 3-D printers, and began making face shields.”

Levine’s partners are Josh Broden, Mitchell Eyerman, both located in Western New York, and Brittany Russo in Long Island. All are starting their final year at the Jacobs School.

It’s not like 3-D printing is a required skill in medical school. But long before anyone had heard of COVID-19, an innovative Jacobs School program called UB BLAST was giving Levine critical lessons in the utility of 3-D printing.

UB BLAST, launched in 2019, is an intense, one-week startup boot camp, where teams of students develop companies and create medical devices that solve a surgical problem. A small piece of the assignment includes designing and creating a company logo, which they then make using 3-D printers.

‘An Opportunity to Make Meaningful Change’

“UB BLAST taught me that if you identify a need and you have the means to address it, including the right team of people, you have an opportunity to make meaningful change,” Levine said. “There was a huge need for PPE and we had an amazing group of people.

“When I saw all these resources online for 3-D printing of PPE, I thought, ‘Wait a minute, I’ve done a little 3-D printing.’”

The students also had their $1,200 stimulus checks, which they invested in the project. They purchased the printers for $200 apiece, but the more significant expense is the plastic filament used to make the products. So far, Levine estimates they have purchased over 30 rolls of it.

It took a month to become skilled enough at 3-D printing to make the face shields.

“There are so many different factors that go into a successful print that we all were learning from scratch,” Levine said.

Using a design that had been preapproved by the National Institutes of Health, Levine learned all the design software that went into the printers, as well as critical details, such as fan settings, temperatures and materials.

“It was a huge engineering endeavor,” Levine said. “Admittedly, we didn’t realize how much engineering would be involved.”

After getting pointers from an engineer he connected with on Facebook, Levine and his team members were ready. After a number of prototypes, they finalized the design. The first face shields were ready to be donated on April 20.

At that point, Western New York’s hospitals had sufficient PPE, so the team began donating to downstate hospitals, where the need was greatest, including New York Presbyterian, Nassau University Medical Center, Stony Brook University Hospital and some Northwell Health hospitals. Downstate donations were made through Russo, who had returned to her Long Island home and whose printer is, like those of her teammates, busily producing face shields.

“We donated 400 to the ICU directors of those hospitals and they were very grateful, they were accepting any pre-approved PPE they could get,” Levine said.

Once the New York City area’s cases tapered off, Levine and his teammates pivoted back to the needs of Western New York, donating where needed to local hospitals and to an organization called SNAPCAP (Safety Net Association of Primary Care Affiliated Providers of WNY).

In total, they have provided about 600 face shields to the group, and they hope to continue to do so.

“We like SNAPCAP because they are a community organization and they do a lot of grassroots work, like pop-up testing for COVID-19 in our more vulnerable neighborhoods,” Levine said.

“We love it, it’s a giant help,” said Travis Wood, administrative coordinator at SNAPCAP. “PPE acquisition is very difficult for the landscape we’re in right now.”

“It’s sadly true that these populations in our communities have been hit disproportionately by COVID-19, so it’s doubly important at a time like this,” Wood said.

And while it might look like the need for PPE has dropped with the reduction in COVID-19 cases, Wood said the need is still there, making the donations from the UB students a critical ingredient.

“One hundred percent, we are going to need PPE,” he said. “It will be a continuing ask. The goal for any provider would be not only patient health but community health, and to really turn those words into action, PPE will be part of it.”

As the community reopens, and the students look forward to their final year of medical school, Levine said the opportunity to develop new skills and make a truly meaningful contribution at a time when it was sorely needed has been life-changing for all of them.

“This project taught us that we are all capable of finding the silver lining and taking life into our own hands,” he said.