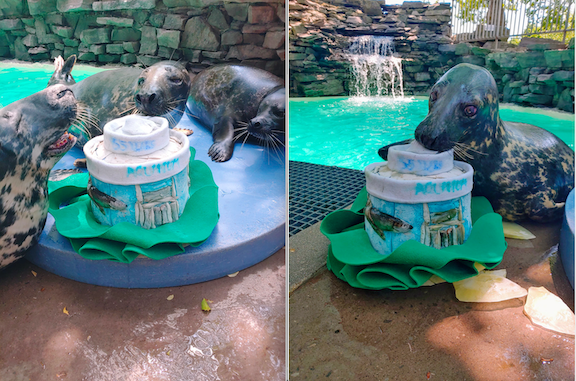 Images courtesy of the Aquarium of Niagara

On Friday, the Aquarium of Niagara will celebrate its 55th anniversary as a destination for education, conservation and inspiration in Niagara Falls.

While the venue is currently closed to the public in response to the COVID-19 pandemic, the organization will mark the occasion with a special “look-back” video and a commemorative T-shirt that will be for sale at www.aquariumofniagara.org. Proceeds will benefit the aquarium’s animal collection.

The Aquarium of Niagara has been home to many history-making moments throughout its 55 years. It opened in 1965 as a private corporation led by a small group of chemists and scientists with the goal of creating an artificial seawater formula that could be used by inland aquariums. Prior to their breakthrough, aquariums relied on actual ocean water for exhibits. The synthetic seawater formula those researchers created, known as “Instant Ocean,” is now used by most inland aquariums around the world.

Throughout the decades, the Aquarium of Niagara has embraced its role as a champion for aquatic life. For nearly 30 years, it was known for its most popular animal residents: dolphins that were celebrated for their fun and playful demonstrations. However, as research helped scientists learn more about the needs of those complex, intelligent animals, it became evident the Aquarium of Niagara was no longer an appropriate home for the cetaceans. The dolphins left in 1995.

In 1978, the Aquarium of Niagara established its Humboldt penguin colony and became a breeding institution for the Peruvian birds. In 2018, the site completed a $3.6 million renovation of its penguin exhibit, a project that helped the aquarium gain accreditation by the Association of Zoos and Aquariums and participate in the Species Survival Plan for the threatened Humboldt species.

Since its early days, the Aquarium of Niagara has embraced rescued and non-releasable seals and sea lions. In 1980, it welcomed Sandy, a young harbor seal who was rescued as an abandoned pup off the coast of Washington state. Sandy later became the first harbor seal in history to receive cataract removal surgery. The procedure was performed right here in Western New York. The surgery is now regularly performed at zoos and aquariums around the world.

In 1994, the Niagara Aquarium Foundation was established and incorporated by charter from the Board of Regents of the State University of New York, making the Aquarium of Niagara a not-for-profit organization.

Today, the aquarium is home to more than 120 different species, including 10 rescued and non-releasable marine mammals.

In its 55 years, the Aquarium of Niagara has welcomed an estimated 11.8 million visitors with its recent annual attendance topping 305,000. The venue continues to improve its policies and practices to align with the highest industry standards for animal care.

The aquarium has demonstrated a commitment to growing and improving the visitor experience, most recently with the addition of the “Aliens of the Sea” jellyfish exhibit and the soon-to-open “M&T Bank Shark & Ray Bay,” an interactive touch pool featuring sharks and stingrays.

“Reflecting on 55 years of history has made us stronger in our response to the COVID-19 pandemic,” said Gary Siddall, executive director of the Aquarium of Niagara. “A number of strategic decisions have positioned us to build a sustainable future for the aquarium, and I am fully confident that we will continue to celebrate decades worth of success as we think bigger, bolder and with more innovation about what the future will look like. Our mission makes it clear that we will partner with our community and inspire people to make a difference of aquatic life.”

The Aquarium of Niagara recently completed a strategic planning process and is looking to its next major capital project: a state-of-the-art habitat featuring seals and sea lions.

It is expected to reopen to the public in phase four of Gov. Andrew Cuomo’s “New York Forward” plan. That could happen as soon as Tuesday, June 30.

The nonprofit Aquarium of Niagara is open daily at 9 a.m. year-round (except for Christmas and Thanksgiving), at 701 Whirlpool St. For more information, visit www.aquariumofniagara.org.