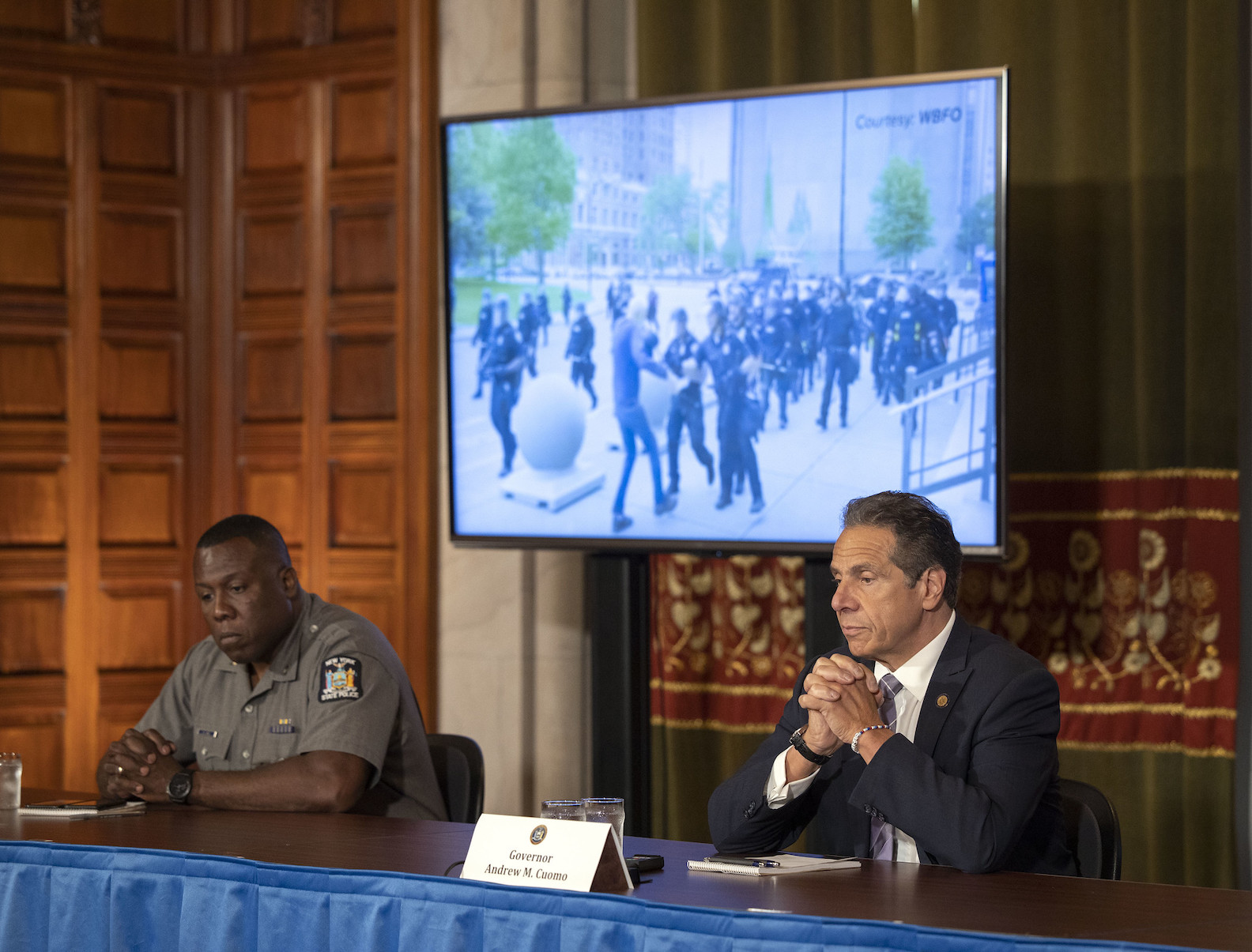 Gov. Andrew Cuomo provides updates on protests following George Floyd's death and the coronavirus during a press conference in the Red Room at the State Capitol. (Photo by Mike Groll/Office of Gov. Andrew M. Cuomo)

Cuomo on violent incidents at protests in Buffalo & NYS: 'We must change and we must stop the abuse'

Cuomo introduces 'Say Their Name' reform agenda following the death of George Floyd, and an ongoing pattern of police brutality against minority communities across nation.

“People have seen Mr. Floyd's murder. They're watching what's going on, on the streets, every day, and they're saying enough is enough. And it's what they are seeing and what they know that is disturbing,” he said. “We are going to show you again, for those of you who haven't seen, a scene from Buffalo and a scene from New York City because this is a story all across the state.

“This is Buffalo, New York, yesterday. I just spoke with Mr. Gugino on the phone, who is that gentleman, who – thankfully – is alive. You see that video and it disturbs your basic sense of decency and humanity. Why? Why? Why was that necessary? Where is the threat? Older gentleman and where was the threat? Then you just walk by the person while you see blood coming from his head. Police officers walked by. It's just fundamentally offensive and frightening. It's just frightening. You say, ‘Who are we? How did we get to this place?’

“Incidents of pushing the press. You have incidents of police getting hit with bricks in the head. You say where are we? Who are we? These are undeniable situations.

“Buffalo situation, I want to applaud Mayor Byron Brown, Mayor of Buffalo. He suspended the police officers yesterday, immediately and I believe the district attorney is looking into it from a possible criminal liability point of view. I applaud the district attorney for moving quickly. People see this, they see the facts. Now, when you have all this emotion you have to focus on the facts and the intelligence of the matter. It can't be about emotion. Of course, police must protect the public safety and police must protect themselves. That's a fact.

“Of course, there are also cases of police abuse and the abuse of power. That's a fact. You can have two coincident facts. Mr. Floyd's murder was the breaking point of a long list of deaths that were unnecessary and which were abusive. That is a fact and people are saying, enough is enough. That is a fact. What people are saying is, we must change and we must stop the abuse – and that is a fact. And New York should be at the forefront of that. That has always been New York's legacy as the progressive capital. We are the ones who hold the standard of what is the right progressive reform and New York should pass next week what we call the ‘Say Their Name’ reform agenda.

“ ‘Say Their Name’ reform agenda comes from the long list of names of people who we have seen who have been abused by police officers, by the criminal justice system, and Mr. Floyd is just the last name on a very long list. Fine. Enough is enough. Change the law, take the moment, reform.”

Cuomo announced the "Say Their Name" reform agenda following the death of Floyd and an ongoing pattern of police brutality against minority communities across the nation. The governor said he will work with the State Legislature to get these policies done next week.

The list of policy priorities builds on earlier proposals he called for in the immediate aftermath of Floyd’s death, and prior executive actions he has taken including appointing the attorney general as a special prosecutor in matters relating to the deaths of unarmed civilians caused by law enforcement.

"Mr. Floyd's murder was the breaking point of a long list of deaths that were unnecessary and abusive, and people are saying enough is enough, we must change and we must stop the abuse," Cuomo said. "Stopping police abuse vindicates the overwhelming majority – 99.9% – of police who are there to do the right thing. It restores the confidence, the respect, and the trust that you need to make this relationship work. You have to heal the police-community relationship for the sake of the police and for the sake of the community. As the progressive capital of the nation, New York should be at the forefront of this movement; and I want to work with the Legislature to pass these policy priorities next week to reform our systems and put a stop to this abuse once and for all."