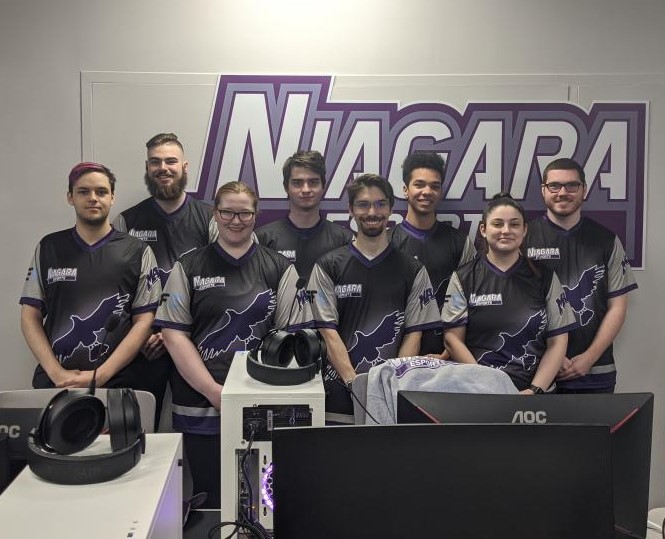 What started as a group of eight students who shared a passion for video games has quickly become an officially recognized student organization and club sport at Niagara University with more than 40 members. In their inaugural year, NU’s esports teams have competed on a weekly basis against other esports programs across the country as a member of the Division 1 Metro Atlantic Athletic Conference (MAAC) and the Electronic Gaming Federation (EGF).

The opening of The Nest in O'Shea Hall in late January was key in facilitating the participation and success that the Niagara esports program was hoping for. Teams can now practice and strategize in a dedicated area that includes 12 state-of-the-art desktop computers with powerful RTX 2060 graphics cards, 24-inch 1080p monitors, custom set and controlled rainbow lighting, and three 50-inch TVs in preparation for intercollegiate play in four titles: League of Legends, Overwatch, Rocket League and Super Smash Bros. Ultimate.

Jacob Arends, captain of the League of Legends team and social media coordinator for the esports club, said The Nest “was a great thing for all the teams.”

“Communications went up, gameplay improved, and we got to have that human interaction, which allowed everyone to see each other's emotions. We also were able to review games and go over strategies to prepare for our matches,” he said, adding new teams could be formed because of the increased availability of hardware, and new members joined because they were able to see what Esports was all about.

“The amount of growth we saw this year from some of our teams was outstanding, and I think the space played a key role in that,” said Bryce Molnar, esports student coordinator. “Bonds of teammates form in a lot of ways. Our teams being able to practice next to each other allows for the players to ride the emotional roller coaster together. As a viewer, being in the room with some of these teams, you can feel the tension of the match.”

Just as in other traditional sports, the students involved in the Niagara esports program dedicate themselves to being student-athletes inside and outside the classroom, spending a few hours each week in practice sessions to work on individual and team techniques and strategies while scouting their upcoming opponents. Their hard work led to completing their first season in the Electronic Gaming Federation, and they planned to participate in the first-ever MAAC Esports Championships in March, which were scheduled to coincide with the MAAC Men's and Women's Basketball Championships in Atlantic City, New Jersey.

Unfortunately, the coronavirus pandemic changed those plans. More than 20 members of the esports club and their university administration support team were on their way to Atlantic City when they received the devastating news.

“It was a mixed bag of emotion,” Molnar said. “We were on the bus as various teams and other events were being cancelled. It was like watching a set of dominoes; we knew it was going to happen, the only thing we didn't know was when.”

Despite their disappointment, the students knew the decision to cancel was the right one. And, due to the individual nature of esports, they were able to compete in the rescheduled, online MAAC Tournament in April, the highlight of which was when Niagara’s League of Legends team defeated rival Canisius College 2-1 in a best-two-of-three game series.

“The online tournament was certainly unique,” Molnar said. “It's similar to a lot of the streaming we do on our twitch page, twitch.tv/niagarauesports, but in a way it felt (like) higher stakes with the commentators. I think the MAAC was a good challenge for our teams. If our growth has shown anything, it's that our ability to adapt and to grow was unparalleled, and our opponents should know that's not stopping anytime soon.”

As the world of esports continues throughout the pandemic, offering engagement and connection for the students who participate, Niagara’s program is planning for the future.

“We're looking at picking up more teams as the main league we're a part of expands,” Molnar said, noting he is looking for growth in three areas: skill, numbers and responsibility. “The way I look at it, the bigger we get, the better.”

“I want to help the club have a bigger presence on campus and start forming a fan base just like basketball or any other traditional sport,” Arends said. “Also, I hope the four big games will continue to improve and (that) we pick up some championships next year.”

The inaugural year for NU’s esports was successful, and the dedication of the students, paired with the support of university administration, paves the way for another tremendous year in 2020-21.

“I have never been more proud of a group of students I have led,” Molnar said. “I have never felt so positive about the amount of effort I have seen people put in, and the amount of growth that comes with it. Esports is climbing in popularity, and with that, so is the appreciation for it. I am so excited to see what we can do next year.”