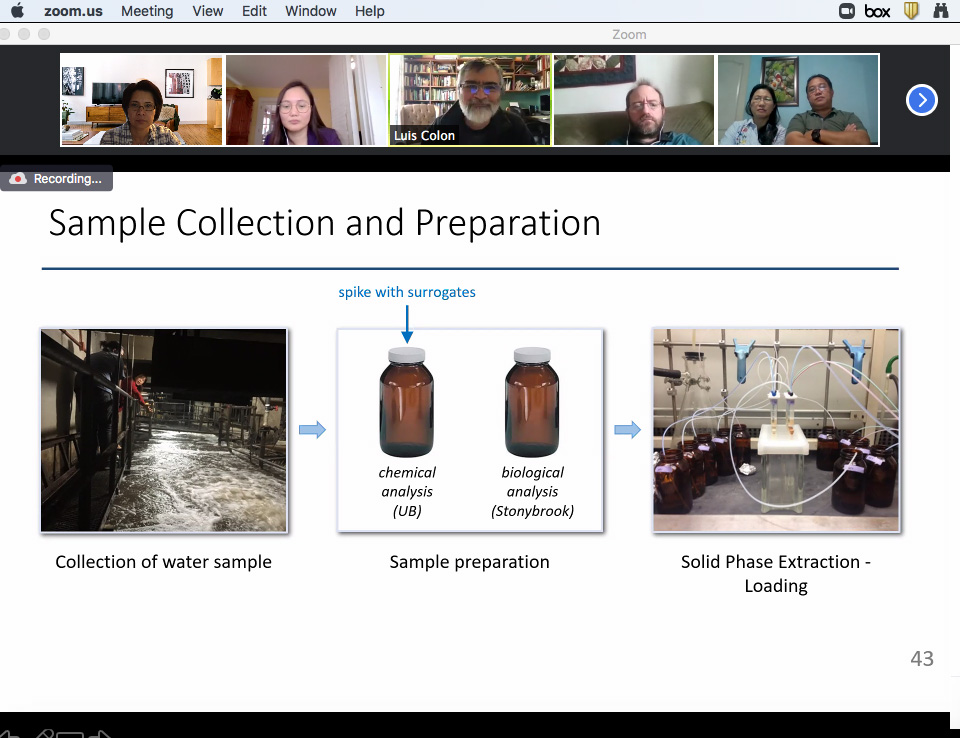 A screenshot shows Luisa Angeles (second user from left) conducts her Ph.D. defense via Zoom as UB faculty members and her parents (sitting together in the far right screen) watch. (Credit: Diana Aga)

Congratulations, Dr. Angeles! What it's like to defend a PhD thesis on Zoom

Like so much else in life, a rite of passage for doctoral students has gone virtual during COVID-19: the Ph.D. defense, in which students present their research and field questions from faculty before receiving a degree.

You enter this event as a student. You leave as a newly minted Ph.D.

For Luisa Angeles in the University at Buffalo department of chemistry, this milestone took place on the afternoon of April 21. It happened on Zoom.

On the bright side, her parents and siblings in Asia got to attend, logging in at 1 a.m. in the Philippines. On a less cheerful note, the celebration afterward just wasn’t the same as it would have been in person, despite a virtual toast.

As far as everything in between – the actual defense – the experience was a little strange, but it went pretty smoothly, Angeles says.

“I’m really happy,” she notes. “It’s one thing that makes me feel really good, that I was able to finish everything. I had to defend my thesis before I can start a job – even with the pandemic going on.”

Angeles was the first student in the UB chemistry department to defend a Ph.D. online during the pandemic.

When she learned in March that she would need to defend virtually, “I really wanted to push through with it,” she says. “I thought it would be agony, waiting to see if the social distancing rules would change.”

For her dissertation research, she developed lab techniques for detecting chemicals such as antibiotics, pesticides and industrial compounds in the environment. She also put those analytical methods to work identifying pollutants found in waterways such as rivers and lakes, and in water released from wastewater treatment plants.

Some tips from Angeles on prepping for a virtual defense:

•Practice – virtually! Angeles’ defense included a 45-minute presentation, followed by a Q&A. She practiced in person with her husband, but she also did a virtual run-through.

“I did a practice with other lab members via Zoom,” Angeles says. “I did the actual presentation and afterward, they were asking questions. It made me comfortable doing the actual Zoom defense.”

•Get familiar with the technology. Angeles says her department laid out some helpful recommendations for online defenses, such as assigning a member of the Ph.D. candidate’s thesis committee to serve as meeting host – a role Angeles’ adviser filled. Before the defense, Angeles and her adviser worked together to test functions like screen-sharing and breakout rooms for private conversations.

•Dress up and find a quiet spot. “Try to dress up the same way you would dress up in a normal defense, and find a nice area in the house where it’s well-lit and quiet, where you would be able to focus,” Angeles says. Doing so gave her confidence and underscored the importance of the event.

Before the defense, “I was still nervous in the same way I was nervous if it was going to be in-person,” Angeles says. “I really appreciate the support of everyone that helped me, because it’s really a difficult time to do a defense because there’s a lot of stress and anxiety.”

With her time at UB complete, Angeles will soon head to North Carolina, where she has landed a job as a chemist with a company that specializes in analytical chemistry. The job interview took place on Zoom, and a tour of the firm’s labs on FaceTime.

Many Emotions of a Virtual Defense

The end of the Ph.D. journey counts as a joyful moment at a time when so much else is grim.

Both Angeles and her adviser, chemistry professor Diana Aga, say the best part of the Zoom defense was that it allowed Angeles’ family in the Philippines to attend. This included Angeles’ parents, whose plans to travel to Buffalo were canceled due to the pandemic, and Angeles’ three siblings, who wouldn’t otherwise have been able to join.

“It was actually a bit emotional at the end when Luisa's parents gave a congratulatory message to their daughter,” says Aga, Ph.D., Henry M. Woodburn Professor of Chemistry in the UB College of Arts and Sciences. “The parents were choking back tears when they spoke. Her younger sister who is in college in the Philippines also attended virtually. Incidentally, she is also a chemistry undergraduate student, so now she has a good idea of what to expect in a Ph.D. defense.”

The defense brought people together in a special way. A faculty member who recently had a baby and was able to attend without leaving home. A former graduate student who mentored Angeles logged in from Luxembourg, where he’s doing postdoctoral research.

Somehow, though, the worst part about defending on Zoom was also not being able to truly celebrate together, Aga and Angeles say.

Before the pandemic, Aga’s team would mark a successful defense with a series of traditions. Friends and colleagues would gather, and the student who just defended would add their name to the door of a laboratory freezer holding the signatures of a long line of past graduates. Though Angeles was able to sign in early May, when she stopped by campus to return keys to Aga, the ritual was a quiet one. Only Angeles, her husband and Aga were present.

Following past defenses, “My students would also give a present and a card to the successful graduate, say congratulatory words and take pictures,” Aga says. “We miss all of these.”

“It’s just happier, more fun, when you’re all together,” Angeles says. “Usually after the defense, we would share food and celebrate together. Just being together after a happy event, I think. That’s what I missed.”

Instead, following Angeles’ defense, participants gave a virtual toast. Together, but also apart, they raised a glass on Zoom. From the U.S., from the Philippines, from Luxembourg, they cheered Angeles on and wished her well in the next phase of her life.