How the Buffalo Bills created newfound sense of winning

The Buffalo Bills are in the midst of coming out of a 17-year rebuild. For the past two decades, the Bills have gone through the same cycle year in and year out. Buffalo constantly has had a quarterback-coach carousel and it was tiring the dedicated Bills fanbase.

As 2017 rolled around, the Bills found themselves 9-7 and in one of the last wildcard spots. First year head coach Sean McDermott led the Bills back to the playoffs for the first time in my entire life. The excitement and buzz that covered Buffalo was something the city hadn’t seen in years.

Unfortunately, the Bills couldn’t beat the Jacksonville Jaguars who were led by a killer defense featuring Jalen Ramsey.

Once this game was over, the focus was on the 2018 NFL draft, which was headlined by potentially four quarterbacks being taken in the top 15 picks of the first round. This was good news for the Bills, as they were in desperate need of a new signal caller after Tyrod Taylor was viewed as not being the future of the Buffalo Bills.

The first overall selection in this draft was Baker Mayfield, who was selected by the Cleveland Browns, then Sam Darnold to the Jets at No. 3. At the No. 7 pick, the original owners of the draft choice, the Tampa Bay Buccaneers, traded it to the Buffalo Bills. Just after this trade was announced, Adam Schefter, ESPN draft analyzer, explained the Bills, “got on the phone with Tampa and traded two extra second round picks, to move up to No. 7, to put the Bills in position to get the quarterback that they’ve coveted.”

As this happened, a kid who played quarterback at Wyoming University named Josh Allen was realizing all of his dreams. The Bills selected Allen with the No. 7 overall pick, despite the public consensus that UCLA quarterback Josh Rosen was the more NFL-ready quarterback. Chris Burke explained in a Sports Illustrated mock draft that Rosen would go first overall, several spots before Allen.

Though this was the point of view of many Bills fans, Allen did and does have many physical attributes that fit perfectly in the harsh Buffalo winters. He possesses a strong arm that can get a ball into a receiver’s hands quickly and on time through the bitter Buffalo cold. Buffalo also loved the ceiling that Allen had: He was viewed as a player who could be hit or miss, someone who could have a very good career, or a career almost as forgettable as Johnny Manziel’s, the 22nd pick in the 2014 draft.

Going into the 2018-19 season, Buffalo had no clue who its starting quarterback was. The three choices included Nate Peterman, who had thrown five interceptions in one half of football the year prior; AJ McCarron, who was viewed as a player who never reached his full potential; and Allen, the rookie from Wyoming who had a lot to prove.

The viewpoint of Buffalo fans was that Nate should win the starting job. Dan Lavoie wrote an article for the Buffalo Rumblings about each quarterback’s upside, when talking about Peterman, he explained “While the other quarterbacks have struggled behind Buffalo’s offensive line, Peterman’s quick trigger and ability to roll out of the pocket have kept the offense moving every time he entered the game. Now in his second year, Peterman looks like he put his rookie year demons behind him, and he’s playing with confidence under center.”

Peterman ended up winning the starting job from the other two quarterbacks. This didn’t last long as he was pulled midway through the first game in favor of the young man who had just been drafted.

Allen was viewed as playing prematurely, because many people believed he would sit for the entirety of the season. As the young quarterback played his first NFL snaps, all of Buffalo was on edge, as this was the start of the Allen era.

After a mediocre 2018-19 season, and a 6-10 record, Buffalo fans were optimistic about the upcoming season. Even though Buffalo had missed the previous postseason, there was still hope as the Bills were entering the third year in the McDermott head coaching system. Buffalo added weapons such as wide receiver John Brown, who is widely respected around the entire NFL. During the 2019 offseason, Brown sat down with Bills personnel to talk about his first season as a Buffalo Bill. He explained, “I just want to make plays and help out the offense as much as I can.”

This kind of work ethic is something that the Bills needed more of – a blue collar player who will fit in with the blue-collared City of Buffalo.

Other examples of new toys for Allen include receiver Cole Beasley, who came to Buffalo from the Dallas Cowboys; and a defensive weapon in Ed Oliver, a pass rusher from the University of Houston, in which the Bills drafted with their ninth overall pick in 2019.

All of these things that were happening to the organization were positive for both the team and the fans.

Amy Lukasic, a 21-year season ticket holder, explained, “Even though we had been going through hard times in the early 2000s, the fans and city never gave up; we never stopped rooting on the team. I guess that’s just how Buffalo works. Looking at the Jim Kelly era and this new Bills era, it is easy to see the same excitement about the future in both times.”

The 2019-20 season brought Buffalo fans something that they hadn’t experienced since Kelly was under center: hope. The way the 2019 season went was dramatically different than the year prior, starting with the fact the Bills went 10-6 and secured Buffalo’s second playoff game in just a matter of three years under coach McDermott.

The signature win for this Bills team happened during Thanksgiving of that year, against a home Cowboys team that plays on the holiday every season. This is where many people believe Allen finally broke through and showed the world what he could do. The final score of the game was 26-15.

Minutes after the game ended, popular sports broadcaster Colin Cowherd tweeted “America, meet Josh Allen.” So far, this is Allen’s signature career win, and hopefully many more to come on even bigger stages.

The Bills faced off against quarterback Deshaun Watson, and the Houston Texans in NRG Stadium. Unfortunately, the Bills couldn’t hold onto a first half lead and ultimately fell to the Texans.

By setting up the franchise in a Buffalo-minded way, there is no telling how far this team can go in the coming years. It is clear that the fanbase has given into Coach McDermott’s “process” and trust where it will take the Bills in the future. It has proven to work in the past three seasons as the team has made the playoffs two out of three years. As long as the organization is firing on all cylinders, there is no telling how much damage this team can do in the NFL in the very near future. 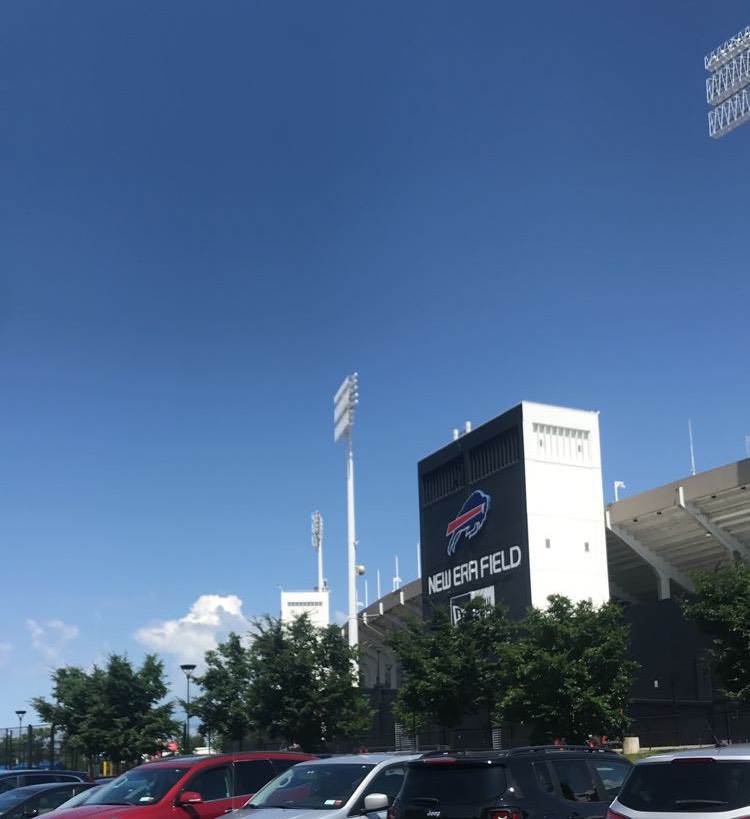 New Era Field is home to the Buffalo Bills. The stadium seats 71,870 screaming fans, who depend on their team week in, and week out.