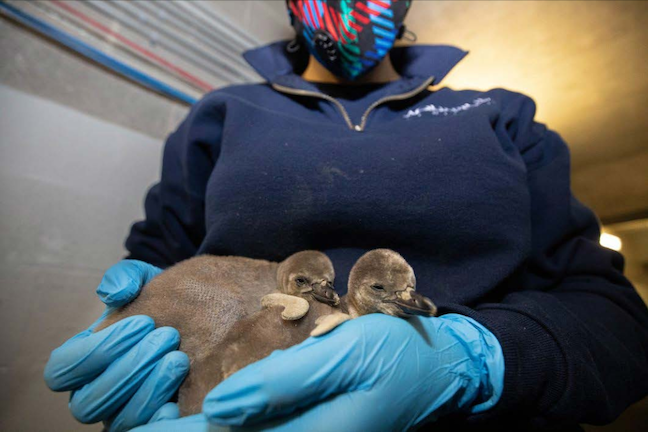 Image courtesy of WNYREDC/Aquarium of Niagara

The exhibit, which opened in 2018, allowed the Aquarium of Niagara to receive accreditation from the Association of Zoos and Aquariums and restart a breeding program for these threatened species.

Two recently hatched chicks join the existing colony of 14 adult Humboldt penguins. This is the first penguin hatching at the Aquarium of Niagara since April 2006.

Animal care staffers said they hope to welcome additional chicks over the next several weeks as they continue to monitor the penguin colony.

The Aquarium of Niagara is currently closed to the public in response to the COVID-19 virus but a video of new penguin chicks can be seen below:

“The Humboldt penguin exhibit at the Aquarium of Niagara was an exciting addition to the aquarium expanding exhibits and increasing visitors,” Lt. Gov. Kathy Hochul said. “During this difficult time with the coronavirus pandemic, it’s great to receive some good news that the aquarium has bred its first new penguins achieving a significant and special milestone. The Aquarium of Niagara continues to grow as a premier tourist destination in Western New York with the jellyfish exhibit and future shark-ray touch tank attracting more children and families to enjoy the attractions and beauty of Niagara Falls and the entire region.”

“On behalf of the WNYREDC, I want to congratulate the Aquarium of Niagara on the important scientific achievement of successfully breeding penguins in the Penguin Coast exhibit,” said Co-Chair and Buffalo State College President Katherine Conway-Turner. “The penguin exhibit, the jellyfish exhibit and the future shark-ray touch tank are all part of an overall strategy that will help bring more visitors to Niagara Falls.”

“The Aquarium of Niagara is once again adding to its value as a regional tourist attraction,” WNYREDC Co-Chair and Campus Labs Co-Founder and President Eric Reich said. “The REDC is proud to support the aquarium, which is key to increasing tourism and economic activity in the region, and I encourage both residents and visitors to see the penguin chicks in person when the aquarium reopens."

The 3,500-square-foot “Penguin Coast” exhibit includes a 15,000-gallon pool, nesting areas, programming and interactive features, while providing a state-of-the-art habitat for the colony to grow to more than 20 Humboldt penguins. The Aquarium of Niagara is one of only 20 facilities in the U.S. and Canada to house the threatened Humboldt penguin species.

"The birth of an animal is always cause for celebration, but we are especially pleased to make this announcement during these otherwise uncertain and difficult times." said Gary Siddall, Aquarium of Niagara executive director. “This is a huge occasion for our organization, and we are thrilled to be able to work with other AZA-accredited aquariums and zoos as we help ensure a bright and successful future for Humboldt penguins.”

Humboldt penguins are native to costal Peru and Chile and are threatened by human intrusions, invasive species, climate change as well as mining and quarrying for energy production. There are now fewer than 32,000 mature individuals in the wild. The AZA administers a Species Survival Plan (SSP) to ensure population sustainability across the accredited institutions currently equipped to care for Humboldt penguins. The incubation of eggs typically takes about 40-46 days; male and female penguins share incubation and chick rearing duties.

Parents of the newly hatched chicks are Blanca (female) and PJ (male); sex of the chicks will be determined through a blood test.

The New York Power Authority provided $1.75 million to support the penguin project through its Western New York Power Proceeds Allocation Board, which uses earnings from the sale of unused hydropower from the Niagara Power Project to fund economic development projects in the region. Other funding included $300,000 from the WNY Regional Economic Development Council and $100,000 through Market New York in 2016.

The Western New York region has been awarded $620.5 million cumulatively through nine rounds of the Regional Council initiative, in state support for 890 projects across the region. The WNYREDC is composed of Allegany, Cattaraugus, Chautauqua, Erie and Niagara counties. To learn more about the WNYREDC, visit https://regionalcouncils.ny.gov/western-new-york.

For more information about the Aquarium of Niagara, visit www.aquariumofniagara.org.

The Regional Economic Development Council (REDC) initiative is a key component of Gov. Andrew Cuomo's approach to state investment and economic development. In 2011, Cuomo established 10 Regional Councils to develop long-term strategic plans for economic growth for their regions. The councils are public-private partnerships made up of local experts and stakeholders from business, academia, local government, and non-governmental organizations.

For more information on the Regional Councils, visit www.regionalcouncils.ny.gov.