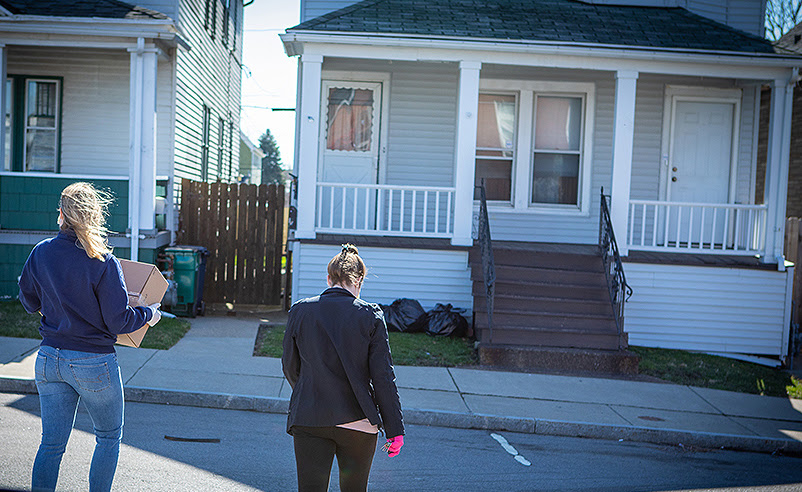 UB medical students have teamed up with the Buffalo Public Schools to deliver meals to at-risk families during the COVID-19 pandemic. (Photo by Douglas Levere)

Amid pandemic, UB students find a new way to help

With the COVID-19 pandemic bringing normal life to a screeching halt across Western New York, students in the Jacobs School of Medicine and Biomedical Sciences at the University at Buffalo have found a new way to help out in the community.

Since March 16, a growing number of Jacobs School students have been delivering meals to food-insecure children in the Buffalo Public School District.

The volunteer effort was the brainchild of James K. Lukan, M.D., clinical associate professor of general surgery and director of the surgery residency program at the Jacobs School.

“The idea came when the Buffalo Public Schools announced they would be closing for some period of time,” said Lukan, who is also on the staff at UBMD Surgery. “Understanding that many public school students depend upon the schools’ meal programs, I reached out to some district contacts with whom we are trying to organize an afterschool reading program.”

Lukan’s contacts put him in touch with the district’s nutrition services department. Although the district has 28 schools open where families can pick up meals, many families have barriers that prevent them from doing so – transportation issues, work conflicts and so forth.

After learning of the urgent need to get food to these at-risk families, Lukan sent out a recruitment email to his third-year students. The next day, some 20 to 25 volunteers showed up to help.

“When we were told we were not going to be able to participate in our clerkships, we found ourselves with a lot of time on our hands,” said Anne Stoklosa, one of the students who responded to the email the first day, and became one of the volunteer effort’s organizers.

“For the past two-and-a-half weeks, this is the only thing we have had on our schedules,” she said. “It’s a way for us to help the best that we could.”

The first week, the volunteers went out every weekday. But the student organizers and the staff at nutrition services then determined it would be more efficient – and less risky to everyone’s health – to limit their trips to twice a week.

Since then, every Monday and Wednesday at 10:30 a.m. and 12:30 p.m., the volunteers travel to the nutrition services building on East Delavan Avenue in Buffalo. There, district employees bring boxed meals, along with gloves and masks, to the students’ cars, making sure to limit contact.

The boxes are packed with breakfasts and lunches for all the school-aged children in each family. On Monday, there is food for two days; on Wednesday, enough for three days. Typical offerings include milk, fruits, vegetables, bread items and proteins, said Bridget O’Brien Wood, director of child nutrition services for the Buffalo Public Schools.

Armed with a list of addresses and phone numbers, the students head out to the community. When they arrive at each home, they call the adult in the house to let them know the meals can be found on the porch.

The list of families changes and grows every week, according to Natalia Crenesse-Cozien, a third-year medical student, and another organizer. She estimated meals were distributed to approximately 90 families the week of March 23.

O’Brien Wood said the volunteers are delivering approximately 450 meals each week. In addition, she said, two UB students are volunteering at one neighborhood school, acting as go-betweens to minimize contact between district staff and the public.

The list of volunteers grows each week, as well. Stoklosa said the number is up to about 50. Most are medical students, but some residents are also participating, as are housemates, friends, siblings and boyfriends and girlfriends. The effort has even attracted non-UB students.

Stoklosa said she hopes the effort “takes on a life of its own,” so that when the medical students are able to return to their classes and clerkships, the meals will still get distributed.

“The students have been amazing,” O’Brien Wood said. “They are providing food to people who would otherwise fall through the cracks. We really appreciate their flexibility, support and conscientiousness.”