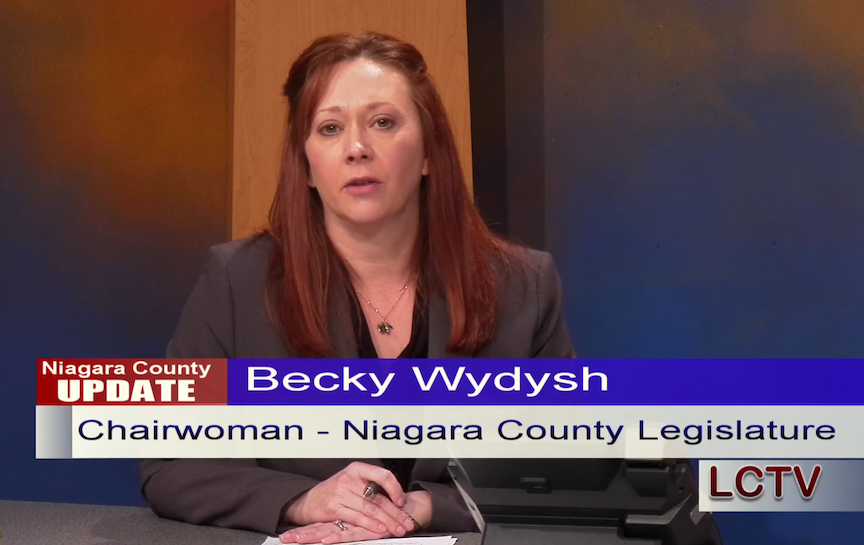 At a press update Monday afternoon inside the LCTV studios in Lockport, Niagara County Legislature Chairwoman Becky Wydysh and Public Health Director Daniel Stapleton announced a sharp – but not unexpected – spike in the number of positive COVID-19 cases.

“Gov. (Andrew) Cuomo was on air live about an hour ago and gave our state update. I can report that he told us that, as of today in New York state, there are 66,497 individuals who have tested positive for COVID-19, and a total of 1,218 deaths, as a result,” Wydysh said. “Certainly, we're seeing those numbers rise, as expected, in New York state, especially, across the country we have very high numbers.

“Dan, not unexpectedly, it seems that we had a much bigger increase in Niagara County over the weekend, as well. We went from 28 to 38, and now we're up to 51 individuals testing positive, is that correct?”

“That's correct,” Stapleton said. “Twenty-one cases, an increase of 23 cases just over the weekend. As you mentioned, not unexpected. We've been saying all along that these numbers will increase, and they have. And I think we'll see that over the coming days.

“So, upswing in cases not unexpected. We're saying over and over again – both of us have said – assume that it's here. It's in Niagara County. It affects anyone of any age.

“Right now, of our 51 cases, our youngest, we have two children 1 years old each, they have it; as well as our oldest is 83. So, it affects all ages.

“The key is for people who are younger thinking that they're fine just because they don't have symptoms. They can have it, and they can transfer to an older person; so that's really something that we're concerned about the most. You can spread to your parents, your grandparents, your neighbors.

“So, that's something we need to continue to stress, that it can affect anyone of any age, and it's everywhere in Niagara County, and in New York state, and across the country.”

Updated numbers can be found at the Niagara County “heat map” website. 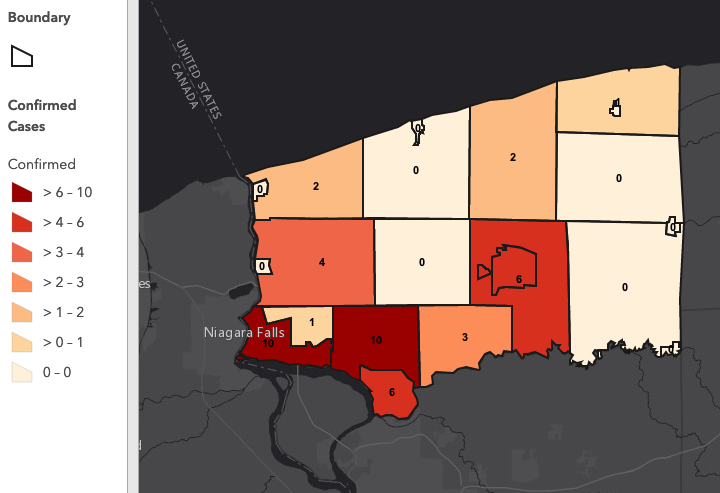 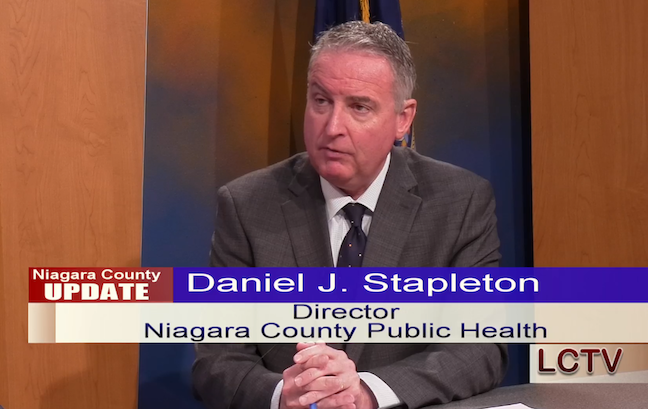 Wydysh asked Stapleton for an update on Eastern Niagara Hospital.

“We had set up that partnership to use their Newfane site, potentially for quarantine, if we needed it,” she said. “Have you had to utilize that building at all yet?”

“Fortunately, we have not,” he said. “The use of that facility will be when we have to quarantine someone and their living conditions are not consistent with the CDC guidelines – whether it's sharing a bathroom; whether it's sharing a bedroom; people have compromised immune systems in their home; those people, the environment won't necessarily be conducive to making sure people are safe in their home.

“Thankfully, we haven't had to worry about that. I get concerned that I'll need to use that, but we do still have that agreement with Newfane and Eastern Niagara Hospital, and hopefully we won't need it. But we want to make sure we're prepared, if we get to the case where we do need to use that.”

Last Friday night, at a meeting of the Niagara County Legislature, “One of the things that we did was passed two resolutions that had to do with budgetary changes for the Department of Health, in relation to COVID-19, to give them some more resources that they needed to help us through this situation,” Wydysh said. “We were also able to pass a 30-day moratorium on interest in penalties on your county tax bill.

“I've had a few questions about this, especially since towns in different cities have different collection dates for their county taxes. So, here's the explanation: Basically, whatever your tax bill is at the end of March, it'll be the same at the end of April. So, if you previously had penalties from previous months, those don't go away. But everything is frozen in place right now, until the end of April.

“And at that time, of course, the legislature can reconvene, reassess that, see where the situation is at that time, if we need to reevaluate.

“We certainly didn't want people having to choose between paying their tax bills to avoid penalties and interest, or compounding those, with having to choose other things in their life that they need to take care of right now – especially when people are on reduced work schedules, and out of jobs, and just in a difficult situation. We wanted to give that little bit of space to help people out.”

Spring is in the Air – But at a Social Distance

Wydysh noted, “We had beautiful weather over the weekend. I was able to get out, get some fresh air with my family, go for some walks, and I just want to commend our residents because – at least down in my neighborhood where I was out and about – I certainly saw families out enjoying walks, bike rides, taking the dog or the kids for a walk. But I didn't see big groups of people in parks; I didn't see basketball games; I didn't see picnics with more than one family or any of those situations. So, people certainly are trying to maintain that social distancing, or physical distancing if you will, when they're out and about. Even as I was walking, people were very careful to take different sides of the bike path and say ‘Hello,’ but not get within that six feet of each other.”

She emphasized, “I just want to thank the public, for those of you who are following these policies and guidelines. That really is the most important thing right now, is to stay home; stay safe; keep your distance; and stay healthy.

“But again, stay emotionally connected. We've heard again and again how difficult this can be for people, whether you're dealing with it firsthand as a first responder, or a health care worker, an essential worker who needs to be around people during the day. Whether you're worried about your own health or the health of a family member, this can be very overwhelming, and we understand that.

“There are people out there who can help you. Again, I remind you that our mental health crisis services line, which is available 24/seven, free and confidential, for anyone to call who needs it, is at 285-3515.”